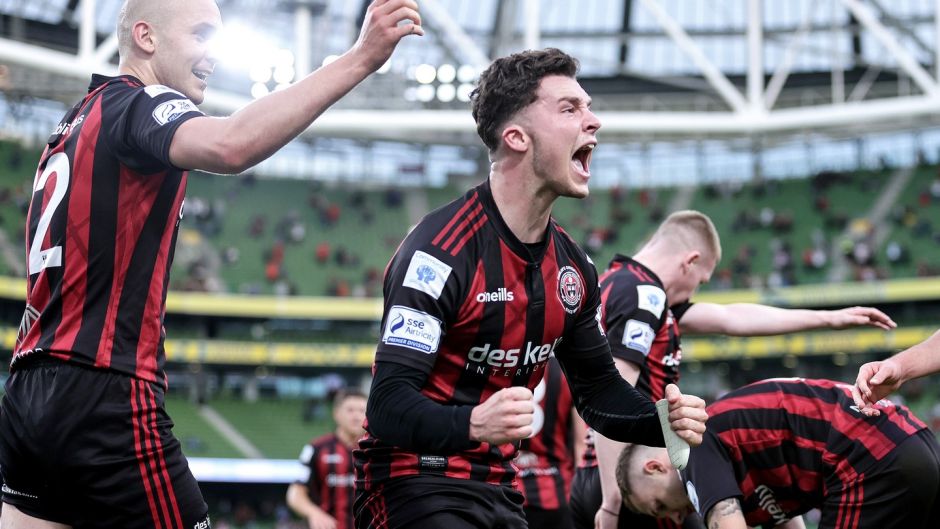 Ali Coote has looked an astute signing ever since Bohemians pried the Scottish winger away from Waterford but his two goals on a magical and tense European night has opened the door to unknown pleasures.

A vicious second leg is promised at the Toumba stadium, known locally as “The Black Hell,” but with €750,000 in Uefa prize money now up for grabs, and another leap towards the Europa Conference League proper, dreaming of this run lasting into the winter months is unavoidable.

Understandably, the 8,000 Bohs faithful were loud and on their feet from kick off. They almost sucked an early goal into James Talbot’s net. Of course, Nélson Oliveira’s swerving effort was to blame. When Andrija Živkovic missed the open target with his follow up, relief and delight punctuated the Aviva.

Still, with three minutes clocked it already felt like a lost cause. The Bohemians fans though stood taller and sung louder.

Every time their team raided forward, be it Coote or big Georgie Kelly putting himself about in a lone furrow, a PAOK player would break up the incursion before left back and captain Vieirinha took a calming touch, before spinning a pass 60 metres down the channel.

One of those miserable nights, when an Irish team seemed so out of their depth that they would be punished for bravery, seemed unavoidable. Whenever Talbot rescued a tricky situation – and there were plenty – he was faced by three solid walls of white jerseys daring him to pick out a fullback or Dawson Devoy on the centre circle. Talbot tended to go long. PAOK and Vieirinha would start again.

In possession this multicultural Greek outfit made the pitch seem like a prairie, without it they condensed space to an alleyway.

Bohs had a half chance in the opening exchanges. PAOK began to drift towards arrogance, after an array of one touch plays allowed Devoy to pick off possession. The teenager fed Ross Tierney, who slipped his man, and squared the ball for Kelly. The Donegal man has scored 16 goals in all competitions this season but the time to think was unavailable here. The moment disappeared as tiki taka resumed.

Not that PAOK looked that sharp. Still mired in preseason, they seemed impatient in the final third, perhaps convinced that the chances would flow for the entire 90 minutes.

And then, out of nowhere, centre half Giannis Michailidis made a mistake. Kelly pounced and rolled a pass for Coote to finish.

One-nil Bohs. 23 minutes clocked. Suddenly, PAOK players were making errors, and it became apparent that the Finnish referee was not fond of his whistle. When Anderson Esiti floored Kelly with his hips, Keith Buckley stamped a path into the midfield contest.

Buckley – who is Conor McGregor’s first cousin – had already accepted the responsibility of keeping tabs on Shinji Kagawa. The former Manchester United playmaker was hauled off after an hour having done little to enhance his reputation.

By then the booming sound of Bohs bodies blocking PAOK shots, mainly from Néslon Oliveira, were reverberating around the stadium. Robert Cornwall must be covered in lumps. The centre half was a colossus.

Criticising Keith Long’s flawless tactical approach in that first 45 minutes seems so cruel, but Tierney did waste a break with Kelly in front of him and Buckley bursting forward, by lofting an easy cross into Alexandros Paschalakis’s gloves. Devoy also flashed a low shot wide.

The PAOK players, now hunting the ball with naked aggression, would have self-combusted if Bohs led 2-0 at the turn.

When Coote rifled home his second, six minutes into the second half, the dream state transformed into reality. This was the sweetest of goals for multiple reasons. Kelly appeared to get the last touch before Anthony Breslin’s corner ignored the clump of heads inside the box, instead picking out the Scotsman who let fly.

In response the Bohemians found their voice again, The Auld Triangle daring the Greeks to punish jingle jangle legs. Talbot and Breslin took their yellow cards.

It had been coming, so when Nélson Oliveira out leaped two Bohs defenders, to make it 2-1 with 12 minutes remaining, the fear was that an already jaded resistance would collapse.

Not on this night. Courage repaid, Bohs finished the stronger.

The task still borders on the impossible. On Thursday week the Toumba will fill to 85 percent of its 29,000 capacity. These vaccinated ultras will have their say. That may prove liberating.