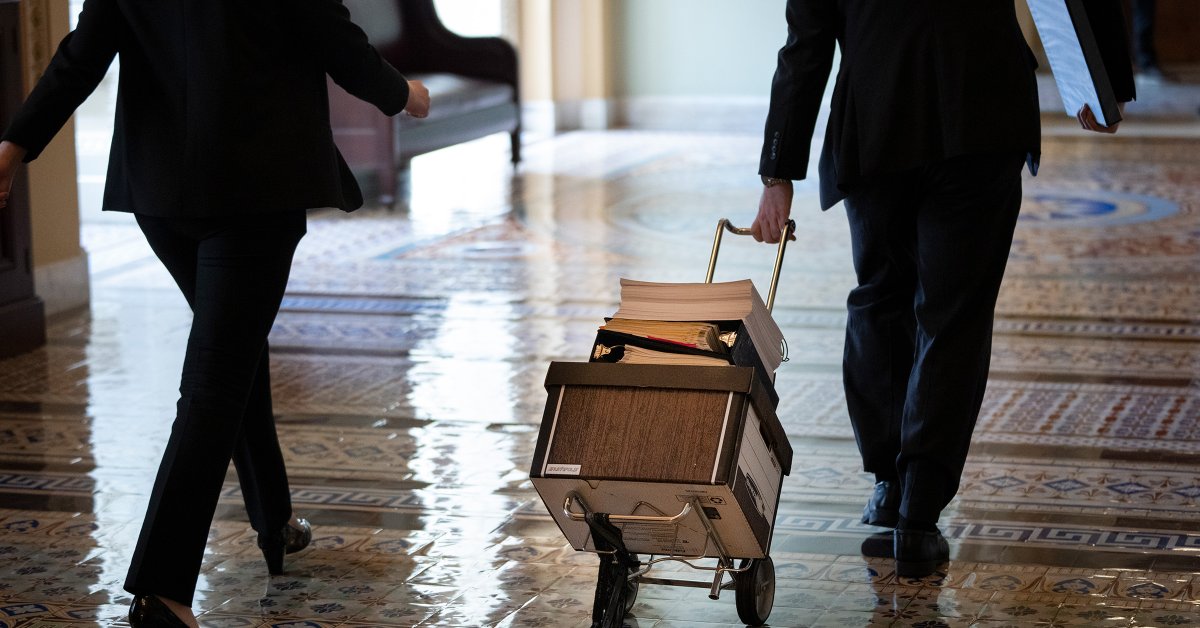 This article is part of the The DC Brief, TIME’s politics newsletter. Sign up here to get stories like this sent to your inbox every weekday.

Amid the 2,702-page bipartisan infrastructure plan that could get a vote by the week’s end is a series of safety requirements for the vehicles set to travel on all those new and improved roads. The feds are set to make it more difficult to get behind the wheel drunk, requiring automakers to install technology in new cars to prevent drunk driving that could take the form of passive monitors for drivers’ breath, eye scans to check focus or even infrared touch tests on ignition buttons.

The mandate could eliminate as many as one-third of traffic-related deaths in the United States that involve impaired drivers. By the government’s own estimate, drunk driving accounts for one death every 52 minutes. Congress’ proposal is a major public-health move that basically says lawmakers are fine paying for the new roadways, but in exchange they want some safeguards that those new lanes won’t be packed with loaded drivers.

One Insurance Institute for Highway Safety study last year estimated such a drunk-driving screening could save 9,000 lives and eliminate as many as a million arrests every year. The insurance industry, in other words, would be very, very happy not picking up the tab for these deadly and avoidable crashes and deaths.

The safety provisions in the framework don’t stop at in-car breathalyzers. On top of the anti-impaired–driver tech, the spending plan also requires rear guards for semi-trucks to protect passenger vehicles who may rear-end them, an in-car reminder every time the engine stops for drivers to check their back seats lest they forget their kids in a hot car and a study about whether federal crash-test dummies accurately measure the impacts on women, the old and the young.

For those outside of Washington, the inclusion of the new car safety requirements may seem far afield from the infrastructure deal’s stated goal of repairing roads and bridges, getting high-speed Internet to rural communities and strengthening the electrical grid. But giant pieces of legislation like this often provide homes for unrelated nuggets that lawmakers have been trying to find a runway for years. For instance, fixes to Obamacare in 2010 carried a wholly unrelated tweak to student loans, the REAL ID requirements for drivers’ licenses got tacked onto a supplemental spending plan in 2005 and the annual mega-spending bill typically carries a ban on federal Medicaid dollars being used to pay for abortions.

And the car safety measures aren’t the only potentially extraneous provisions tucked in the half-billion of new spending. A $140 million a Rare Earth Demonstration Facility to highlight mining’s fruits, a new clearinghouse for researchers to have access to the full spectrum of marijuana products on the market and a potentially embarrassing-to-President Joe Biden report on the number of jobs lost over 10 years because he canceled a permit for the $9 billion Keystone XL pipeline. None of these were likely to get sufficient support as standalone measures but when tucked into a massive bill that has something for everyone, they’re simply the real—or political—costs of a win.

In the case of the breathalyzer or its equivalent, Rep. Debbie Dingell has been pushing for years to set in motion requirements for automakers to add screenings for impaired drivers. (Coming from the Democrat who represents Detroit’s suburbs, the bipartisan infrastructure bill may be the most automaker-friendly option available to them.) The idea for tech-based screenings had its own backers in the Senate, namely Republican Sen. Rick Scott of Florida and Democratic Sen. Tom Udall of New Mexico who are among the strongest voices against drunk driving in Washington.

Some states already require drivers with drunk-driving convictions to use this technology before they get behind the wheel. The universal use of it fundamentally adds another layer of government checks on daily life, but in exchange, Americans receive some measure of assurance that those sharing the road aren’t drunk. (This, of course, does nothing to eliminate distracted driving, which kills more than 3,000 people annually.)

Getting it to Biden’s desk is only half of the fight, of course. If approved, the manufacturers of the widespread anti-drunk-driving tech would be selected by the U.S. Department of Transportation within the next three years, and automakers would have another two years to start using it on new vehicles. The provision also says that if Department of Transportation bureaucrats can’t agree on the specifics of the new regulations governing the technology within 10 years, they will have to explain to Congress why not.

In other words, Congress is giving the DOT an off-ramp should automakers decide the systems are simply unworkable or too costly. The U.S. Supreme Court has previously said a President doesn’t have the power for a line-item veto in a bill but the slow-walk of an administrative state can do the dirty work. But it doesn’t seem very likely that Congress would start down this path if it weren’t convinced there’s at least some viable tech that meets its mandate. It’s not as if Republicans working on this bill want to be branded part of the so-called Nanny State.

You know who else can keep up the pressure? Lobbyists for the groups who stand to make money on this provision. And there are plenty. Ride-share platforms like Uber, insurance firms and tech companies of all stripes could see their profits grow as it becomes all but impossible to get behind the wheel after a few drinks. Even on actions that make good sense on policy, the political money is often what pushes things over the finish line.

Make sense of what matters in Washington. Sign up for the daily D.C. Brief newsletter.

Get our Politics Newsletter. The headlines out of Washington never seem to slow. Subscribe to The D.C. Brief to make sense of what matters most.