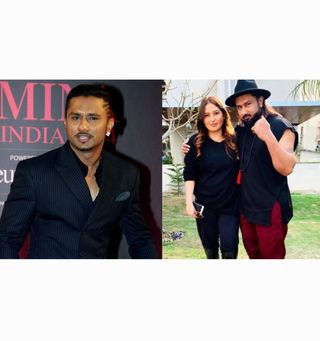 Rapper-singer Yo Yo Honey Singh is now hitting headlines for all the wrong reasons.

The 38-year-old musician has landed into legal trouble as his wife allegedly accused him of domestic violence.

According to the latest India Today report, Honey Singh’s wife Shalini Talwar has reportedly filed a case of domestic violence, sexual violence, mental harassment, and financial fraud against him today (August 3) in Delhi’s Tis Hazari court under the ‘Protection of Women from Domestic Violence Act’.

Shalini has also named mother-in-law Bhupinder Kaur, her father-in-law Sarabjit Singh and singer’s sister Sneha Singh in her complaint, as per News 18.

As News 18reported, an excerpt from the complaint reportedly reads, “The Respondents (Honey Singh and others) also criminally intimidated the applicant (wife), causing her extreme duress and torture.”

“The Applicant (Wife), aged 38 years, is filing the instant petition under section 12 of the Protection of Women from Domestic Violence Act, 2005 (PWDV Act 2005) against the Respondents, seeking protection orders and other reliefs against the atrocities committed by the Respondents.”

“The applicant has been subjected to numerous incidents of physical abuse, verbal, mental abuse and emotional abuse, at the hands of the Respondents,” it further read.

The report also suggests that Shalini supposedly enlisted multiple instances where Honey Singh’s behavior, after his career took off, became “rude, brash, aggressive, contemptuous and disrespectful” towards her. She also stated that Singh has cheated on her, and became addicted to alcohol and drugs. She alleged that the physical abuse started during their honeymoon in 2011 in Mauritius.

According to reports, the court has issued a notice to Honey Singh seeking a response by August 28, 2021, and also passed interim orders restraining him from disposing of any assets that he jointly owns with Shalini.