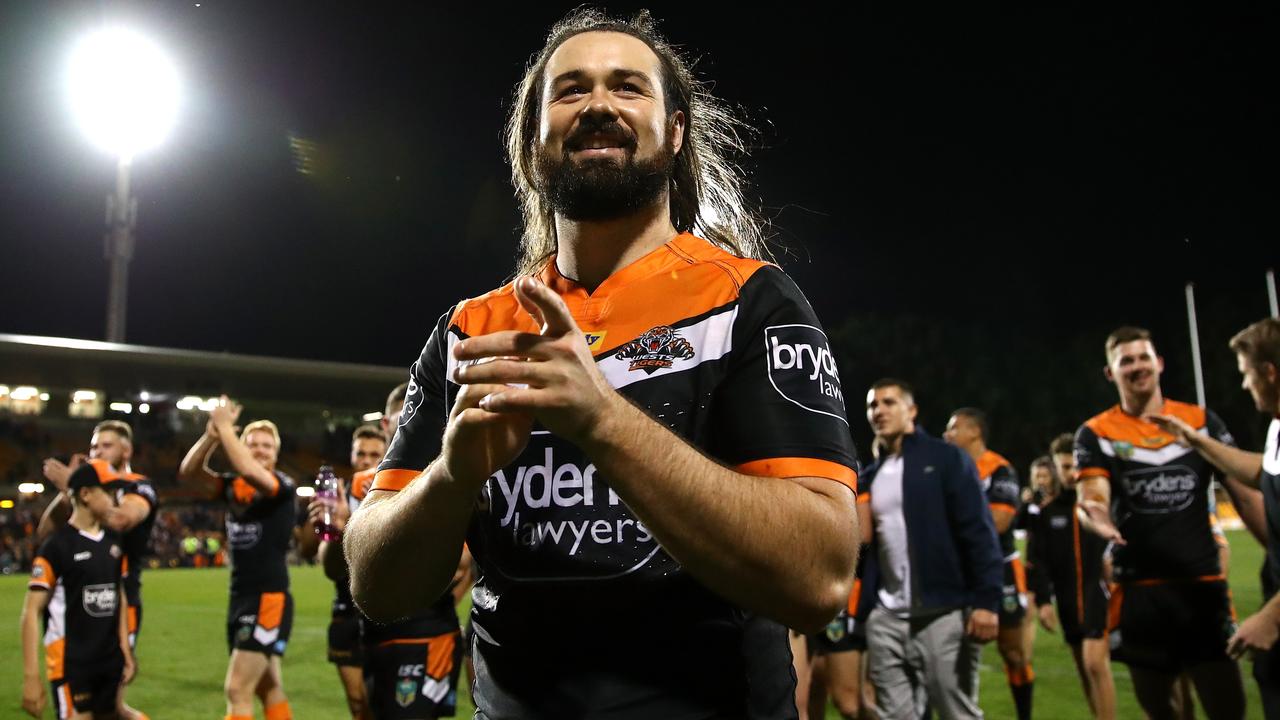 Unwanted Sharks prop Aaron Woods is open to a fairytale return to the club where he made his name the Wests Tigers as his future remains uncertain with just five games left this season.

Off-contract in 2021, Woods was told he is not in the Sharks plans beyond this season and while he is unsure of his future in 2022 and beyond, Woods would not say no if the Tigers came knocking.

“Mate no idea, obviously some stuff happened and pretty much every club that needs a player I get mentioned at the moment,” Woods said when asked where his contract situation is up to.

“It has been good that the deadline is over now so I don’t have to worry about my name getting mentioned every day in the media about being linked to certain clubs.

“I’m more focused on what happens at Cronulla. If it happens at the end of the season I don’t care. I don’t mind waiting. I just want to focus on what we have got going at Cronulla.”

However Woods admitted he would consider a move to his junior club the Tigers, who he played the first 146 of his 228 NRL games to date for from 2011 to 2017.

“Yeah definitely, you never say no to anything,” Woods said.

“It is obviously all right being in a hotel. You get to speak to a couple of the boys. We have the Dragons and Tigers boys here as well.

“So you get to speak to them and ask them a few questions about what is happening at the club.

“It has just been good being around. Being a local junior of the club, you never say no.

“It was a club I loved playing for when I was there so it is quite appealing.”

Woods’ lack of certainty over his future is a little perplexing given he is still only 30 and there are not many players on the market with over 200 games of experience plus 14 Origin and 17 Tests to his name.

However Woods is not worried about finding a club beyond this year and is happy to wait until Cronulla’s season comes to an end, hopefully deep in the finals.

The veteran prop admitted to rushing his contract decisions in the past and wants to make sure he makes the right move for his family in what is likely his last contract.

“Not at all,” Woods said when asked if he is concerned about his lack of offers on the table.

“It is probably up to me as well. I haven’t wanted to rush a decision.

“I remember the last time I went through everything. You look back on things you’ve done and ways you have handled your situations.

Get all the latest NRL news, highlights and analysis delivered straight to your inbox with Fox Sports Sportmail. Sign up now!!!

“I probably look at myself and say I probably rushed my decision last time.

“I’m a realist I am coming to the back end of my career. I’m probably not one on the market that they want to get straight away.

“The decision has got to be good based around my family as well. Probably last time I had other sources involved in making that decision where as now it is just solely on my family and what makes me happy.

“I don’t see any point in rushing it. The club has been really good to me here. The coach Josh Hannay has been unreal. He has never put any pressure on me.

“As long as my main focus is on the Cronulla Sharks then you worry about that other stuff when you get outside the inner sanctum here, then he is happy and that’s what I’ve done.”