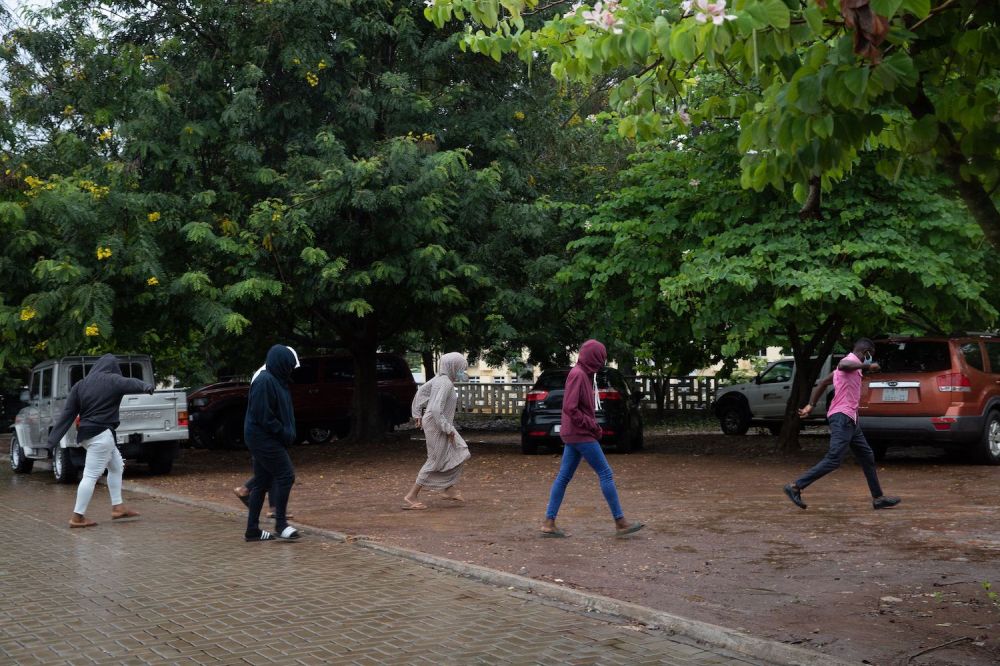 The highlights this week: A sweeping new law could jail LGBT Ghanaians and their allies, a crackdown on Tanzania’s opposition signals a return to the past, and the African novels longlisted for the Booker Prize.

If you would like to receive Africa Brief in your inbox every Tuesday, please sign up here.

This week, Ghana’s Parliament discusses the Promotion of Proper Human Sexual Rights and Ghanaian Family Values Bill, a sweeping law that could criminalize the country’s LGBT community and its allies. While the bill has garnered support in the largely conservative country, it raises questions about the progressive image Ghana has presented to the international community.

“A homophobe’s dream.” The bill would go much further than Ghana’s existing laws, making it not only illegal to be part of the LGBT community but also going after anyone who advocates for LGBT rights. The law carries prison terms of up to five years for Ghanaians who identify as queer, gay, lesbian, bisexual, transgender, transsexual, pansexual, or nonbinary and their allies. What’s more, the law advocates for so-called conversion therapy, a harmful and discredited practice that claims to change a person’s sexual orientation or gender identity.

“This bill is a homophobe’s dream law,” Danny Bediako from the LGBT group Rightify Ghana told the Thomson Reuters Foundation. “The community is shocked at how wide-ranging it is. People are even scared to go out now, and some members say they will leave the country if the bill is passed into law. Even those who want to help us will be afraid.”

Activists and journalists who have seen a leaked copy of the bill were shocked by its crude language and its stripping away of any rights for Ghana’s LGBT community. It also seeks to criminalize any funding of organizations or messaging that could be seen as promoting gay or transgender rights.

Conservative uproar. Until now, Ghana has had a mixed record on LGBT rights. While “unnatural carnal knowledge” and same-sex relationships have been criminalized since 1960, the law itself was unevenly implemented, Human Rights Watch found in a 2018 report. Still, Ghana’s LGBT community regularly faces harassment and physical and psychological abuse.

The opening of a LGBT support center in Accra in February, however, galvanized Ghana’s conservative politicians across the political spectrum. The center opening was attended by European and Australian diplomats, causing outrage at international support for Ghana’s LGBT community. Police raided the offices of LGBT+ Rights Ghana, the group that set up the center, and soon it was closed for fear over the safety of staff after a barrage of threats and abuse.

The center prompted Ghanaian lawmakers including Information Minister Kojo Oppong Nkrumah to push for “legislation in the interest of public morality.” But it was the recently appointed minister of gender, children, and social protection, Sarah Adwoa Safo, who took a harsher stance, telling Parliament in February, “Our laws are clear on such practice. It makes it criminal.”

Ghanaian lawmakers have openly clashed with international diplomats as they push for the law. Another parliamentarian and sponsor of the bill, Sam George, blamed the United States for promoting so-called progressive propaganda and took on Seb Dance of the U.K. Labour Party on Twitter.

The matter has united Ghanaian politicians across the aisle with the backing of religious leaders: Members of the National Democratic Congress and New Patriotic Party are sponsoring the bill, while Muslim and Christian groups—both evangelical and Orthodox—support the new bill. After it was read out in Parliament on Monday, it will now be considered by the constitutional, legal, and parliamentary affairs committee.

LGBT rights groups have tried to raise awareness of the dangers of the bill, using social media to present alternative viewpoints, starting petitions, and holding virtual town hall meetings. The odds, however, are stacked against them. Constrained at home, groups such as Rightify Ghana and LGBT+ Rights Ghana have also tried to raise international awareness to pressure Ghana.

In solidarity with Ghana’s embattled LGBT community, the U.S. Embassy in Accra hoisted a Pride Flag, further infuriating George and other MPs. If Ghana passes the bill, it may invite measures in line with the White House’s February memorandum on LGBT rights around the world or echoing U.S. sanctions against Uganda due to its homophobic laws in 2014. That could cut into Ghana’s tourist revenue and its ambitions of becoming a globally recognized tech hub.

A distraction. Ghana has been celebrated as a beacon of progressive democracy on the continent. This year, when Twitter announced that Ghana would host its Africa headquarters, it did so in praise of the country’s freedoms. Ghana has particularly marketed itself to African Americans as a haven of cultural freedom.

Critics say the focus on the bill distracts from Ghanaian lawmakers’ inability to create proper oversight to end the poor governance that still hampers the country’s developmental ambitions—an issue that has been the subject of growing youth protests in recent weeks. When the #FixTheCountry hashtag briefly turned into public protests over the stagnant economy, bloated government, and lack of basic services, Ghanaian politicians responded by denouncing the young demonstrators rather than addressing their grievances.

Ghanaian politicians seeking to curry favor with the country’s conservatives have historically used homophobic rhetoric under the guise of protecting so-called family values. This bill marks a formalization of that rhetoric that could have life-or-death consequences for LGBT Ghanaians, as was the case in neighboring Nigeria.

“Homophobic laws do not preserve family values either,” Chibuihe Obi Achimba writes in Foreign Policy of his own experience when Nigeria imposed similar laws. “It feels particularly bothersome, shameful even, that in a year marked by the impact of a significant pandemic, politicians in Africa are plotting ways to make the lives of their people more miserable instead of proffering solutions to the continent’s hydra-headed challenges.”

Stalled aid in Ethiopia. USAID Administrator Samantha Power is the latest U.S. official dispatched to Ethiopia to urge Prime Minister Abiy Ahmed’s government to avoid a catastrophic humanitarian crisis in the Tigray region. Power is visiting Ethiopia and Sudan from July 31 to Aug. 4, at a time when the United Nations World Food Program warned the Tigray region would run out of food.

Power joins U.N. humanitarian chief Martin Griffiths, who is already in the country, to try to broker a deal with Amhara fighters to allow aid to enter Tigray.

Aid trucks are confined to a single route to reach the area, but aid groups blame a government blockade and fighting in the Afar region for slowing aid to a trickle. Abiy’s government in turn blames the Tigray Liberation People’s Front, which issued conditions for a cease-fire calling for a transitional government. In the meantime, the U.N. children’s agency warns that 100,000 children face malnutrition while they wait for aid to arrive. 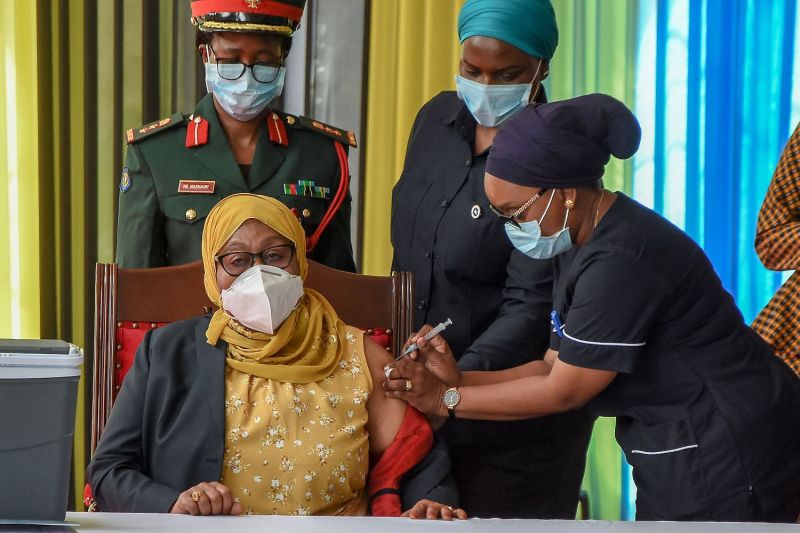 Tanzania’s familiar opposition crackdown. When President Samia Suluhu Hassan received a COVID-19 vaccine on national television last week, it marked a clear break from the policies of her predecessor John Magufuli, who denied the dangers of the disease and whose sudden death in March was shrouded in rumors that he had succumbed to COVID-19.

But Suluhu Hassan was in step with Magufuli when police arrested the leader of Chadema, the main opposition party, on July 22. Freeman Mbowe was rounded up in a nighttime raid with 11 of his supporters as they were preparing to hold a press conference calling for constitutional reforms in Tanzania. Mbowe remains in detention and faces terrorism charges, in a development that harks back to Magufuli’s crackdown on critics as his regime inched closer to authoritarianism before his death in March.

Last February, a French court fined the 50-year-old heir apparent 30 million euros ($32.9 million) and handed down a suspended sentence. It followed a 2017 case in which Switzerland seized and auctioned off his fleet of 25 luxury cars and his yacht, while the United States seized assets worth $70 million, including a Malibu mansion, in 2011.

In France, as in Switzerland and the United States, the proceeds of the seized goods are to be returned to the people of Equatorial Guinea, likely through aid projects. Still, the Obiangs remain defiant: Teodorin also faces sanctions from the United Kingdom, where his father’s government shuttered Equatorial Guinea’s embassy in London last week over similar sanctions.

Vaccine donations to Africa. Over the next month, African countries will receive 25 million COVID-19 vaccines, mainly from the United States. The doses, mostly Pfizer and Johnson & Johnson vaccines, are part of a pledge by U.S. President Joe Biden to share 80 million doses with poorer countries around the world.

The donations, which have begun arriving in Burkina Faso, South Africa, and 49 other countries, are a welcome answer to the calls for vaccine sharing. Still, the donations distract from the multilateral calls from developing countries for the waiving of intellectual property rights on vaccine patents, which would allow facilities in Africa, Asia, and elsewhere to produce their own vaccines.

Prayer over vaccines in South Africa. Almost half of South Africans surveyed by the pan-African group Afrobarometer said they believed prayer was more effective than a vaccine in preventing COVID-19 infection. In a sample of 1,600 South African adults, more than half said they were unlikely to get a vaccine, while less than a third said they trusted the government to ensure the safety of the vaccines.

Galgut, who has been shortlisted twice before, is recognized this year for The Promise, the intergenerational story of a white South African family struggling with issues around identity and the promises of freedom. Jennings’s An Island wrestles with questions of land, friendship, and the meaning of home when a young refugee washes up on an island inhabited only by a solitary lighthouse keeper.

The Fortune Men by the Hargeisa-born, London-based author Nadifa Mohamed is set in 1952 in a cosmopolitan Cardiff, where a Somali shopkeeper learns the limitations of justice. Last year, the Ethiopian American novelist Maaza Mengiste and the Zimbabwean author Tsitsi Dangarembga were shortlisted for the 50,000 pound ($69,000) prize.

The shortlist will be announced on Sept. 14 and the winner on Nov. 3.

Nigeria’s postfeminist fashion is only for the wealthy. In the last decade, fashion has become an expression of feminism in Nigeria—a transnational signifier for empowered women with the means and freedom to express themselves. Yet, as this conversation in Africa Is a Country between Simidele Dosekun, the author of Fashioning Postfeminism, and the academic Grace Adeniyi-Ogunyankin shows, this empowerment is still the preserve of wealthy Nigerian women and remains aspirational for working-class women.

Pan-Africanism in a Time of Pandemic. Looking back at Africa’s post-independence era, when solidarity conferences helped shaped a unified vision for the continent’s development, Mary Serumaga laments in the Elephant that conferences these days are generally “aid conferences” organized by donors, eroding Africa’s policy independence. Even when Africans attend and speak, the agenda is still largely set by rich countries and Bretton Woods institutions, reducing the African point of view to what she calls the “residual wretched.”