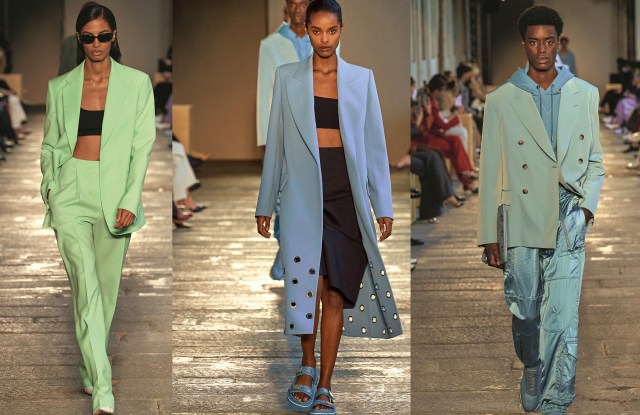 Hugo Boss returned to growth in the second quarter, but shy of pre-pandemic sales levels.

Revenues rocketed 133 percent to 629 million euros in the three-month period. However, that figure was still below Q2 sales of 675 million euros in 2019, the last “normal” business year before the COVID-19 pandemic hit.

In the first half, the marquee German brand was able to rack up revenues of 1.12 billion euros, an improvement of 39 percent on the numbers from pandemic year 2020. In the first six months of 2019, the company made 1.34 billion euros in sales.

In a statement accompanying the results, the company’s new chief executive officer Daniel Grieder trumpeted Hugo Boss’ “great potential,” saying that “we are well prepared to further drive our business recovery also in the second half of the year.”

Grieder is to present his five-year strategy to investors and media later today.

Hugo Boss grew in all of its territories compared to 2020, when retailers’ doors were closed across Europe, North America and Asia on a rolling basis, as infections ebbed and surged. The company said that only 20 percent of its retail stores were closed at any one time between April and June of this year.

Over the first half of the year, Hugo Boss added 21 new freestanding stores to its network, including its first flagship in Tokyo’s Ginza shopping district, but also closed 18 others.

In the brand’s all-important home market of Europe, sales dipped 4 percent to 385 million euros over Q2. While business remained static in France and Germany, sales in the United Kingdom offered a bright spot, growing 7 percent on a two-year stack basis, the company said.

In the Asia-Pacific region, sales were driven by mainland China, an area the company has been targeting for several seasons now. Although the region overall ended with a 3 percent decrease in sales when compared to pre-pandemic levels over two years, business in China grew 33 percent compared to 2019 levels. Hugo Boss made 104 million euros in total in the Asia-Pacific region.

In the Americas, sales surged 416 percent in the quarter to 123 million euros. Despite the huge change from last year, the numbers didn’t compare as well to 2019 when the company made 139 million euros in this market over Q2. This meant a decrease of 5 percent for sales in the Americas on a two-year basis.

As office employees worked from home and large events were cancelled, it was logical that the pandemic would have a detrimental impact on Hugo Boss’ core business of formal wear and suiting. Over the year, the company pivoted to more casual iterations and this was reflected in a rise in sales of the less formal Hugo line, even compared to 2019. Hugo sales over this quarter totaled 87 million euros.

Although the company said that its more formal line, Boss, did benefit from “pent-up demand for occasion wear and business wear” over Q2, sales for this line did not return to pre-pandemic levels. These totaled 541 million euros over Q2 this year, compared to 587 million euros in 2019.

Hugo Boss made modest forecasts for the rest of the year, predicting the brand would end the year with sales up between 30 and 35 percent compared to 2020 and EBIT somewhere between 125 million and 175 million euros. If this is achieved, the German brand would still end this year with sales totals and an EBIT far lower than in 2019.