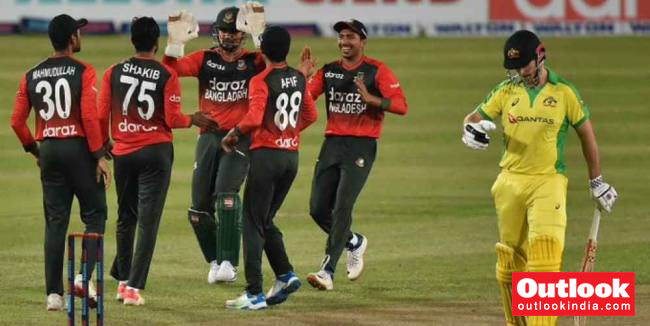 Left-arm spinner Nasum Ahmed claimed a career-best 4-19 as Bangladesh successfully defended a moderate 131-7 and beat Australia by 23 runs in the first of their five Twenty20s on Tuesday. (More Cricket News)

Australia was bowled out for 108 in 20 overs, it’s lowest total against Bangladesh in the shortest format.

Failing to deal with the spinners cost Australia.

Mitchell Marsh, who struck three half-centuries in five matches against the West Indies, was the only Australian to sustain any resistance. He made a run-a-ball 45 before being sixth man out.

The combination of Nasum, Shakib and Mahedi reduced Australia to 11-3 in the third over.

Mahedi broke through with the first ball to dismiss Alex Carey, Nasum got Josh Philippe stumped for 9, and Shakib accounted for Moises Henriques before Marsh got going.

With Shakib and Mahedi denying Australia a flow of runs, Nasum ripped through the middle order in a gem of spin bowling.

Marsh kept the visitors’ hopes alive with calculated aggression, and his confidence grew after hitting Shakib for six. Marsh was undone in Nasum’s last over when he went for a slog-sweep, and Australia’s chances effectively went with him.

Made to bat first, Shakib top-scored for Bangladesh with 36 off 33, and opener Mohammad Naim struck a 29-ball 30, clobbering two fours and as many sixes. Afif Hossain added an unbeaten 23 off 16.

Naim flicked Australia speedster Mitchell Starc for a six over midwicket with a cracking shot in the second ball of the innings.

Starc’s new ball partner, Josh Hazlewood, broke through with the wicket of Soumya Sarkar on 2, and Naim was removed by legspinner Adam Zampa.

Shakib and captain Mahmudullah played with caution but failed to rotate the scoreboard rapidly.

Hazlewood (3-24) broke the partnership, dismissing Mahmudullah for 20 with a knuckle ball.

Hazlewood also took the crucial wicket of Shakib when he appeared set to pace the scoreboard.

Starc got a couple of tailenders but Afif Hossain held up one end to help the side go past 130.

The second match is on Wednesday. (AP)