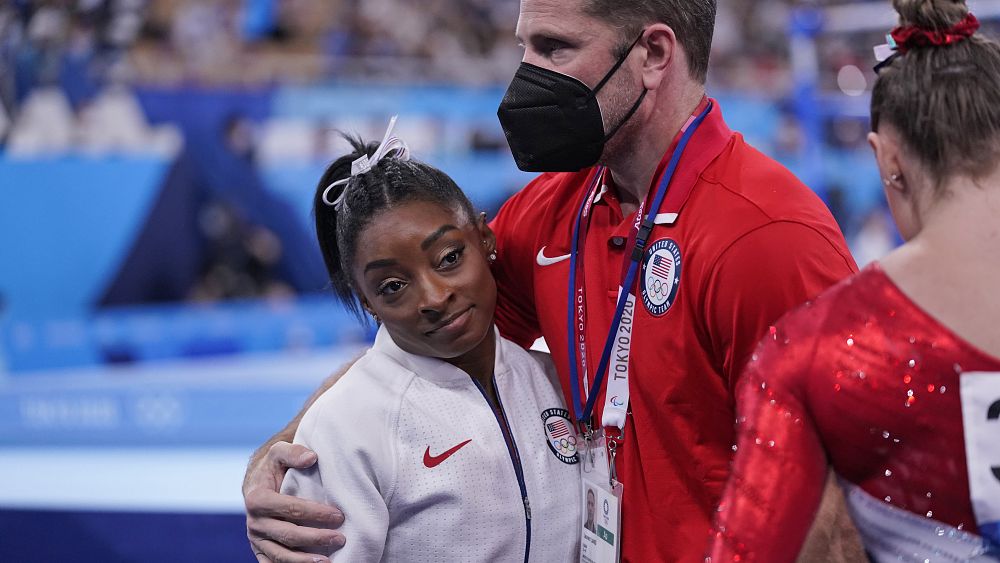 2016 Olympic gymnastics champion Simone Biles will return to competition in the balance beam final on Tuesday, a little over a week after stepping away from the meet to focus on her mental health.

“We are so excited to confirm that you will see two US athletes in the balance beam final tomorrow — Suni Lee AND Simone Biles!! Can’t wait to watch you both!” USA Gymnastics said in a statement.

The 24-year-old Biles won bronze on beam in Rio de Janeiro five years ago and qualified for the eight-woman final at the Ariake Gymnastics Centre on the first weekend of the Games.

She removed herself from the team final on July 27 after a shaky performance on vault during the first rotation.

She watched from the sidelines as her three American teammates completed the meet without her; the US took silver behind the team known as the Russian Olympic Committee.

The six-time Olympic medalist later said she was dealing with issues surrounding air awareness, referred to as “the twisties” in her sport.

From athletics to badminton, here is a recap of what else is happening today in Tokyo.

Soufiane el-Bakkali of Morocco won the gold medal in 8 minutes and 8.90 seconds, ending more than 40 years of Kenyan Olympic dominance and earning himself his first major title.

Kenya had won nine straight Olympic golds in the 3,000 steeplechase since 1980. Kenya’s Conseslus Kipruto, the leading star of the steeplechase, didn’t defend his Olympic title in Tokyo after failing to make the Kenyan team at the national trials.

Miltiadis Tentoglou of Greece has edged Cuba’s Juan Miguel Echevarria for the men’s long jump gold medal with a winning jump on the last attempt.

Tentoglou’s 8.41 metres in the last round equalled Echevarria’s best mark but he won on a countback because he had the better of the next-best jumps.

Echevarria, jumping last, lost rhythm in his run-up and stopped before the board, kneeled on the ground and hit the runway with his hands.

Sifan Hassan of the Netherlands started her bid to win three medals at the Tokyo Games by earning gold in the 5,000 metres.

Hassan pulled away with about 250 metres to go and cruised to the win in a time of 14 minutes, 36.79 seconds. She beat Hellen Obiri of Kenya by nearly two seconds. Gudaf Tsegay of Ethiopia was third.

Earlier in the day, the 28-year-old Hassan had a scare when she fell on the final lap in the opening round of the 1,500. She picked herself up, caught the pack and won her heat to advance. She’s also entered in the 10,000 metres.

That kept the United States out of the win column at the Olympic track meet for yet another session.

Puerto Rico, a US territory that competes under its own flag at the Olympics, has one more track gold medal than the deepest team at the Games, as the meet approaches its halfway point.

Discus thrower Valarie Allman won the first track and field gold medal for the United States at the Tokyo Games.

Shin Jeahwan of South Korea has won the gold in men’s vault in a tiebreaker with the Russian Olympic Committee’s Denis Abliazin.

Both men averaged 14.783 on their two vaults. Jeahwan claimed the top spot because he had the single highest vault score. The 14.833 he received for his second vault was higher than Abliazin’s top score of 14.800.

The 21-year-old from Arizona bounced back from a frightening stumble during the vault final on Sunday to claim the top spot on floor with a score of 14.366. The medal is the fifth claimed by the U.S. women’s gymnastics team in Tokyo even with star Simone Biles sitting out four finals to focus on her mental health.

Italian Vanessa Ferrari, fourth at both the 2008 and 2016 Olympics, claimed silver. The 30-year-old’s dramatic performance drew a roar from the various federations inside the Ariake Gymnastics Centre.

Angelina Melnikova of the team representing the Russian Olympic Committee and Mai Murakami of Japan tied for bronze with a score of 14.166.

The win was an upset of sorts for Liu, who finished fourth in Rio de Janeiro.

Jean Quiquampoix of France has earned the gold medal that eluded him five years ago in Rio, matching an Olympic record to win men’s 25-metre rapid-fire pistol at the Tokyo Games.

Quiquampoix left no doubt at Asaka Shooting Range, hitting 34 of 40 shots to beat Cuba’s Leuris Pupo by five shots. The 25-year-old member of the French armed forces matches the Olympic record Pupo set while winning gold at the 2012 London Games.

Gray was the No. 1 seed and Rotter-Focken was No. 2. The two are long-time friends who have competed since their teenage years.

Britain has won its record fourth Olympic gold medal in team eventing — its first gold in the event since 1972.

The Aussies narrowly edged France for second — the French had a final score of 101.50.

The Chinese women’s cycling sprint team of Bao Shanju and Zhong Tianshi beat the German duo of Lea Sophie Friedrich and Emma Hinze in the finals to win the gold medal.

In the race for bronze, Daria Shmeleva and Anastasiia Voinova, representing the Russia Olympic Committee, beat Laurine van Riessen and Shanne Braspennincx of the Netherlands.

Germany qualified first in the women’s team pursuit at the Tokyo Olympics, shattering Britain’s five-year-old record with a time of 4:07.307 on the first day of track cycling at the Izu Velodrome.

That means the Germans will face Italy and Britain will face the US in the medal rounds Tuesday. The winning teams will race for gold.

The unseeded Indonesians won the first game 21-19 and the second 21-15 against an overwhelmingly favoured Chinese team.

Emotions ran high in the match, with both teams screaming after won points and several times disputing their opponent’s requests to change shuttles. At one point, Polii ran off the court after breaking her racket, got a new one, and joined the point in progress. Indonesia won the point.

Axelsen, who won bronze at the 2016 Rio Games, was aggressive from the start, taking the first game 21-15, and then overwhelming Chen in the second 21-12.

Chen had been trying to become the second Chinese man in a row to win back-to-back Olympics in the sport.

Wang Zhouyu has won China’s sixth weightlifting gold medal of the Tokyo Olympics with a commanding victory in the 87-kg category.

Tamara Salazar won the silver for Ecuador with a total 263kg. She is Ecuador’s second-ever female medalist, one day after teammate Neisi Dajomes became the first with a gold in the 76kg event.

Crismery Santana took the bronze with 256kg for the Dominican Republic.

Emily Campbell became the first British woman to win an Olympic weightlifting medal with silver on a total 283kg while Sarah Robles of the United States repeated her bronze from 2016 with 282kg.

April Ross and Alix Klineman have advanced to the quarterfinals of the Olympic beach volleyball tournament.

After taking the first set, Ross and Klineman lost the first four points in the second. Cuba’s Lidy Echeverria and Leila Martinez led 9-7 when Echeverria was slow to get up after a collision at the net. The Americans took the point, and went on to win the second set as well.