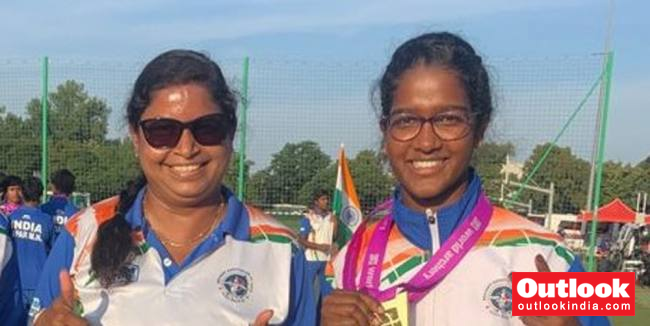 Reigning under-18 world champion Komalika Bari made a perfect transition to the under-21 age group, winning the junior title in the Archery Youth World Championships in Wroclaw on Sunday to become the second Indian after Deepika Kumari to achieve the feat. (More Sports News)

Komalika ended with two gold medals including one with Parth Salunkhe in junior mixed team as India returned with a record haul of eight gold, two silver and five bronze from the tournament.

Overall, the recurve archers on Sunday won three gold in the junior (under-21) and two in the cadet (under-18) section, where Bishal Changmai also bagged two gold medals.

India also bagged three bronze medals in the women’s team, individual and men’s individual events for a perfect show in the cadet section.

Their gargantuan medal haul, however, came in absence of the Asian heavyweights Korea and China who have skipped the meet.

India’s previous best show in the tournament was in the last edition at Madrid 2019 where they bagged two gold and one bronze medal.

Exactly 10 years after Deepika completed the only other Indian double in Legnica, which is just one hour away from this venue in Poland, the Jamshedpur-born Tata Archery Academy archer emulated the feat of her senior teammate.

World number one Deepika is the only other Indian to win successive cadet and junior titles (Ogden 2009 and Legnica 2011).

“We are on the right track for Paris Olympics. It was a fitting tribute to the nation on the 75th Independence day,” Dronacharaya Awardee team coach Sanjeeva Singh told PTI.

Komalika missed out on a third medal as the women’s team lost to Ukraine 5-1 in the bronze playoff.

Earlier, the men’s team defeated their French rivals 5-3, while the mixed pair followed suit with a 6-2 win over Japan to continue their winning run.

For Tamnna, the mixed pair gold was her second medal as she had in the morning won a bronze in the team event.

Prior to Wroclaw, Indian archers have won a total of 26 medals (6 gold, 9 silver and 11 bronze) at the Youth World Archery Championships/Junior World (old name), while 15 only came from this meet.