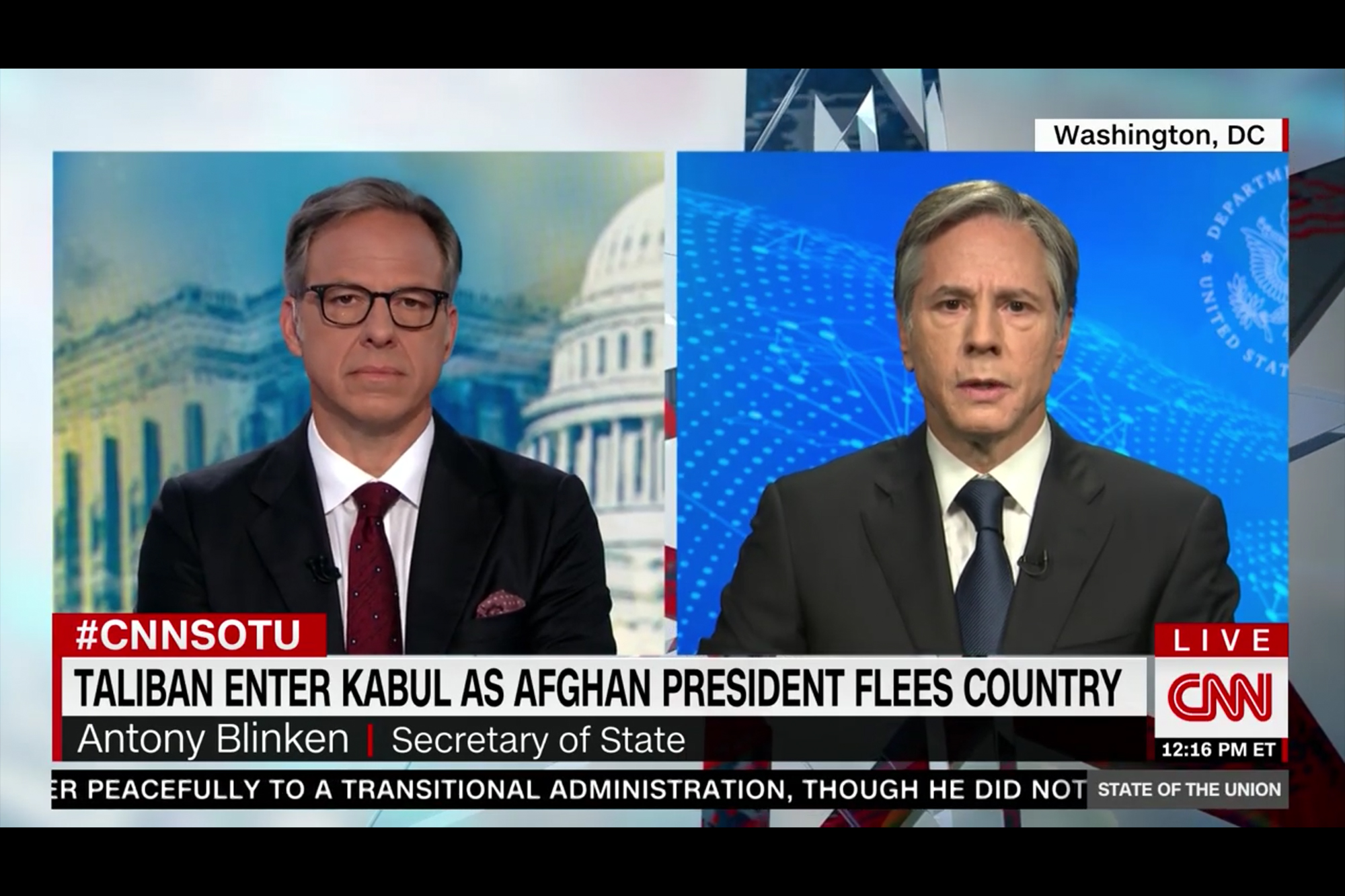 Jake Tapper questioned Biden Secretary of State Antony Blinken over the collapse of the Afghan government following the withdrawal of all U.S. troops from the country, asking how the president—who insisted the government would not fall—could “get this so wrong.”

Blinken responded that the U.S. has accomplished its goals in the nation. “We were in Afghanistan for one overriding purpose, to deal with the folks who attacked us on 9/11,” Blinken said, citing the assassination of Osama bin Laden in 2011 and diminished threat from al Qaeda.

But Tapper pushed back, saying that “the issue here is not just the withdrawal of U.S. forces. It’s how they were withdrawn, the rapidity, the hastiness.”

Tapper then quoted analysis from former Obama ambassador to Afghanistan, Ryan Crocker, who said that the withdrawal was “a handover to the Taliban” that left the Afghan people “hung… out to dry.” Crocker concluded, “I’m left with some grave questions in my mind about Biden’s ability to lead our nation as commander in chief, to have read this so wrong, or, even worse, to have understood what was likely to happen and not care.”

Tapper questioned, “Does President Biden not bear the blame for this disastrous exit from Afghanistan?”

Blinken replied, “We have said all along, including the president, that the Taliban was at its greatest position of strength at any time since 2001 when it was last in charge of [Afghanistan]. That is the Taliban that we inherited. And so we saw that they are very much capable of going on the offensive and beginning to take back the country.”

He continued, “But, at the same time, we had invested, over four administrations, billions of dollars, along with the international community, in the Afghan security and defense forces. Building a modern military with sophisticated equipment, 300,000 forces strong, with an air force that the Taliban didn’t have. And the fact of the matter is, we have seen that that force has been unable to defend the country. And that has happened more quickly than we anticipated.”

Secretary of State Antony Blinken defends the Biden administration’s decision to pull US forces out of Afghanistan: “The idea that the status quo could have been maintained by keeping our forces there, I think, is simply wrong.” #CNNSOTU https://t.co/5uk1k2vMbY pic.twitter.com/qlX6LU7BTB

President Biden also justified the decision to withdraw in a statement issued Saturday. In it, the president said that additional years of U.S. troops in the country would not necessarily lead to a different outcome. “One more year, or five more years, of U.S. military presence would not have made a difference if the Afghan military cannot or will not hold its own country,” the president said. “An endless American presence in the middle of another country’s civil conflict was not acceptable to me.”

Tapper objected to Biden and Blinken’s arguments that the only options were to leave the way we did or stay in the country interminably. And he pressed Blinken on the administration’s decision Saturday to deploy additional troops “to make sure we can have an orderly and safe drawdown of US personnel and other allied personnel and an orderly and safe evacuation of Afghans who helped our troops during our mission and those at special risk from the Taliban advance.”

“You keep changing the subject to whether we should be there forever, and I’m not talking about that,” Tapper said. “I’m talking about whether or not this exit was done properly, taking out all the service members before those Americans and those Afghan translators could get out. That is what I’m talking about. And then you have to send people back in… That’s the definition of ‘Oh, we shouldn’t have taken those troops out because now we have to send twice as many back in.’ ”

Blinked responded that the decision to send thousands of troops back “shows… the president was prepared for every contingency as this moved forward.”

“We had those forces on hand,” he said. “And they were able to deploy very quickly, again, to make sure that we could move out safely and securely as the situation the ground changed.”

Those troops are now helping to evacuate all personnel from the U.S. embassy in Kabul within the next 72 hours, representing an acceleration of the original plans. And they will also help evacuate Afghan translators who have assisted American troops during the war.

Tapper then told Blinken that his show has been discussing “for months” the need to evacuate interpreters, many of whom could suffer extreme consequences if the Taliban captured them.

“Thousands of these folks are now trapped in their homes,” Tapper said. “They cannot even try to get to Kabul. It’s not safe. I know two lieutenants, veterans who are like setting up a GoFundMe to save their translators from COP Keating.”

Blinken replied that the interagency task force charged with assisting translators “has been going for many, many weeks now.”

Tapper next asked Blinken whether this evacuation resembles the “hasty” U.S. evacuation from Vietnam.

“Biden is intent on avoiding a Saigon moment,” Tapper said. “But with this troop surge to airlift Americans out of Afghanistan, aren’t we already in the midst of a Saigon moment?”

But Blinken pivoted back to his earlier answer, saying that the U.S. reached its goals in the country. “Remember, this is not Saigon,” Blinken said. “We went to Afghanistan 20 years ago with one mission. And that mission was to deal with the folks who attacked us on 9/11. And we have succeeded in that mission. The objective that we set, bringing those who attacked us to justice, making sure that they couldn’t attack us again from Afghanistan, we have succeeded in that mission.”

But as of Sunday morning, the country was on the brink of falling to the Taliban. Afghan President Ashraf Ghani left the country as Taliban insurgents invaded the nation’s capital. And many other major cities are now under Taliban control. The Taliban is reportedly expecting a complete transfer of power.