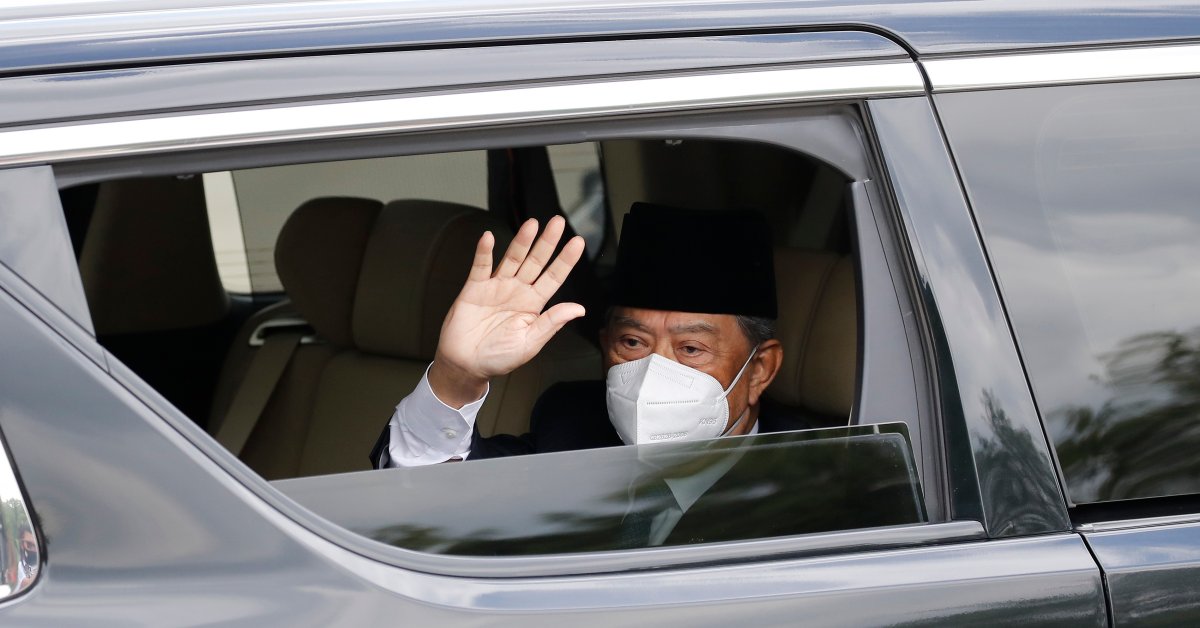 Science Minister Khairy Jamaluddin wrote on Instagram that “the Cabinet has tendered our resignation” to the king, shortly after Muhyiddin left the palace after meeting the monarch. Deputy Sports Minister Wan Ahmad Fayhsal Wan Ahmad Kamal also thanked Muhyiddin for his service and leadership in a Facebook message.

Muhyidddin’s departure will plunge the country into a fresh crisis amid a worsening COVID-19 pandemic. Political leaders have already begun to jostle for the top post, with his deputy Ismail Sabri rallying support to succeed Muhyiddin and keep the government intact.

His resignation comes on the back of mounting public anger over what was widely perceived as his government’s poor handling of the pandemic. Malaysia has one of the world’s highest infection rates and deaths per capita, with daily cases breaching 20,000 this month despite a seven-month state of emergency and a lockdown since June to tackle the crisis.

Local media said the national police chief, the Election Commission chairman and the attorney-general were also summoned to the palace Monday before Muhyiddin arrived. Muhyiddin, who chaired a Cabinet meeting at his office earlier Monday, waved at reporters at the palace gate and left 40 minutes later. Muhyiddin is expected to hold a news conference later.

“Muhyiddin has been ruling on borrowed time. His poor governance, focus on survival politics and unwillingness to acknowledge his failings have led to his undoing,” said Bridget Welsh of Malaysia’s University of Nottingham, an expert in Malaysian politics.

But his departure has also put Malaysia in unchartered waters. “The focus now is on Malaysia having a peaceful transition to a new government that can manage the crisis,” she said.

Muhyiddin’s government had had a razor-thin majority and dodged leadership tests in Parliament from the start. It finally fell when over a dozen lawmakers from the biggest party in his alliance pulled their support for his government. Two ministers from the United Malays National Organization also resigned from the Cabinet before Monday’s actions.

Under Malaysia’s constitution, the prime minister must resign if he loses majority support and the king can appoint a new leader who he believes has the confidence of Parliament.

Muhyiddin initially insisted he still has majority support and would prove this in Parliament next month. But in a U-turn Friday, the premier sought opposition backing to shore up his government. He promised to call general elections by next July. He also offered concessions including proposals to limit the prime minister’s tenure, bolster checks and balances and a senior minister role to the opposition leader, but his plea was rejected by all parties.

The king can decide on a new leader, but currently, no one coalition can claim a majority. A three-party alliance, which is the biggest opposition bloc, has nominated its leader Anwar Ibrahim as a candidate for prime minister. But the bloc has under 90 lawmakers, short of the 111 needed for a simple majority. That’s also less than the 100 lawmakers believed to be backing Muhyiddin.

Other contenders include Deputy Prime Minister Ismail who is from UMNO, but it’s unclear if a deal can be struck and if the king will accept it. Some opposition lawmakers also opposed such a deal, saying the whole Cabinet must resign for the government’s failings.

Local media said another possible candidate was Razaleigh Hamzah, an 84-year-old prince who was a former finance minister. Razaleigh, who is an UMNO lawmaker, is seen as a neutral candidate that could unite the warring factions in UMNO.

Meanwhile, former Prime Minister Mahathir Mohamad, 96, has called for a national recovery council to be formed and led by professionals to resolve the country’s economic and health crises.

Muhyiddin took power in March 2020 after initiating the collapse of Mahathir’s reformist government that won 2018 elections. He pulled his Bersatu party out to join hands with the UMNO-led coalition that had led Malaysia since independence from Britain in 1957 but was ousted in 2018 over a multibillion-dollar financial scandal. Mahathir abruptly resigned to protest Bersatu’s plan to work with the former government.

Muhyiddin’s government is unstable as UMNO has been unhappy with playing second fiddle to his smaller party. Muhyiddin halted Parliament for months last year to shore up support. He again suspended Parliament since January and ruled by ordinance without legislative approval under a state of coronavirus emergency that ended Aug. 1.

The Coronavirus Brief. Everything you need to know about the global spread of COVID-19