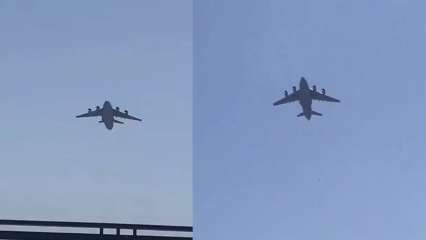 With the Taliban entering Kabul and toppling the Afghanistan government, people are rushing to leave the country for whatever it takes. Several videos are emerging out of the war-torn country showing a stampede-like situation at the airport where people are elbowing and shoving each other to climb into an airplane set to fly out of the Kabul Airport.

One such video is being widely shared on social media which shows people falling off the aircraft as it takes off from the Kabul airport.

The shocking video shows two persons, who were clinging to the airplane wheel in a desperate attempt to leave the country, falling from the sky as the aircraft took off.

Video shows two people, who were clinging to the airplane wheel, falling from sky as the aircraft takes off. There is no end to the tragedy happening in #Afghanishtan.pic.twitter.com/TTgApeO6yh

News agency Aśvaka reported that three men were clinging to different parts of the C-17 aircraft and they later fell to their death.

“One of the locals confirmed this and said that the fall of these people made a loud and terrifying noise,”Asvaka News said in a tweet.

Exclusive- A clear video (from other angle) of men falling from C-17. They were Clinging to some parts of the plane that took off from Kabul airport today. #Talibans #Afghanistan #Afghanishtan pic.twitter.com/CMNW5ngqrK

Another video was shared by Zee News Editor-in-Chief Sudheer Chaudhary people jostling to climb into an aircraft parked at the airport. The aircraft can is seen surrounded by hundreds of people fighting to get inside through the only ladder connected to the front door.

Latest pictures from Kabul Airport. People are on their own now while the world watches in silence. Only sane advise to Afghan people…RUN pic.twitter.com/RQGw28jFYx

Similar videos have emerged showing people walking around the tarmac. In the capital city of Kabul, long traffic jams have been reported, showing that people are leaving no stone unturned in their attempt to leave the country.

On Sunday, the Taliban captured the capital Kabul. President Ashraf Ghani fled Afghanistan as the government surrendered. Today, hundreds were seen attempting to flee the country from the Hamid Karzai International Airport in Kabul on board one of the last flights flying out.