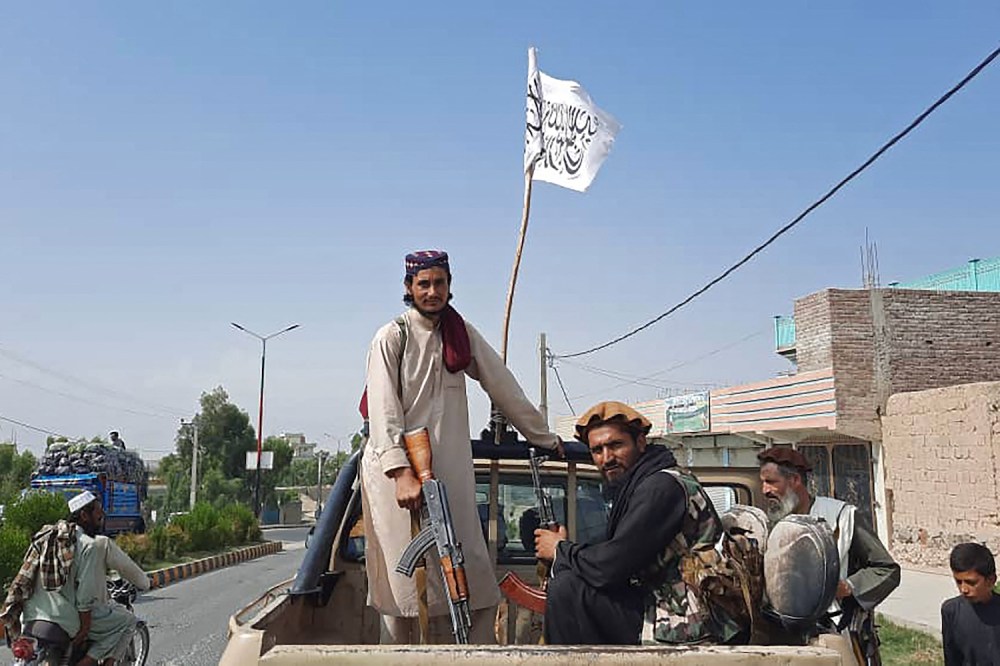 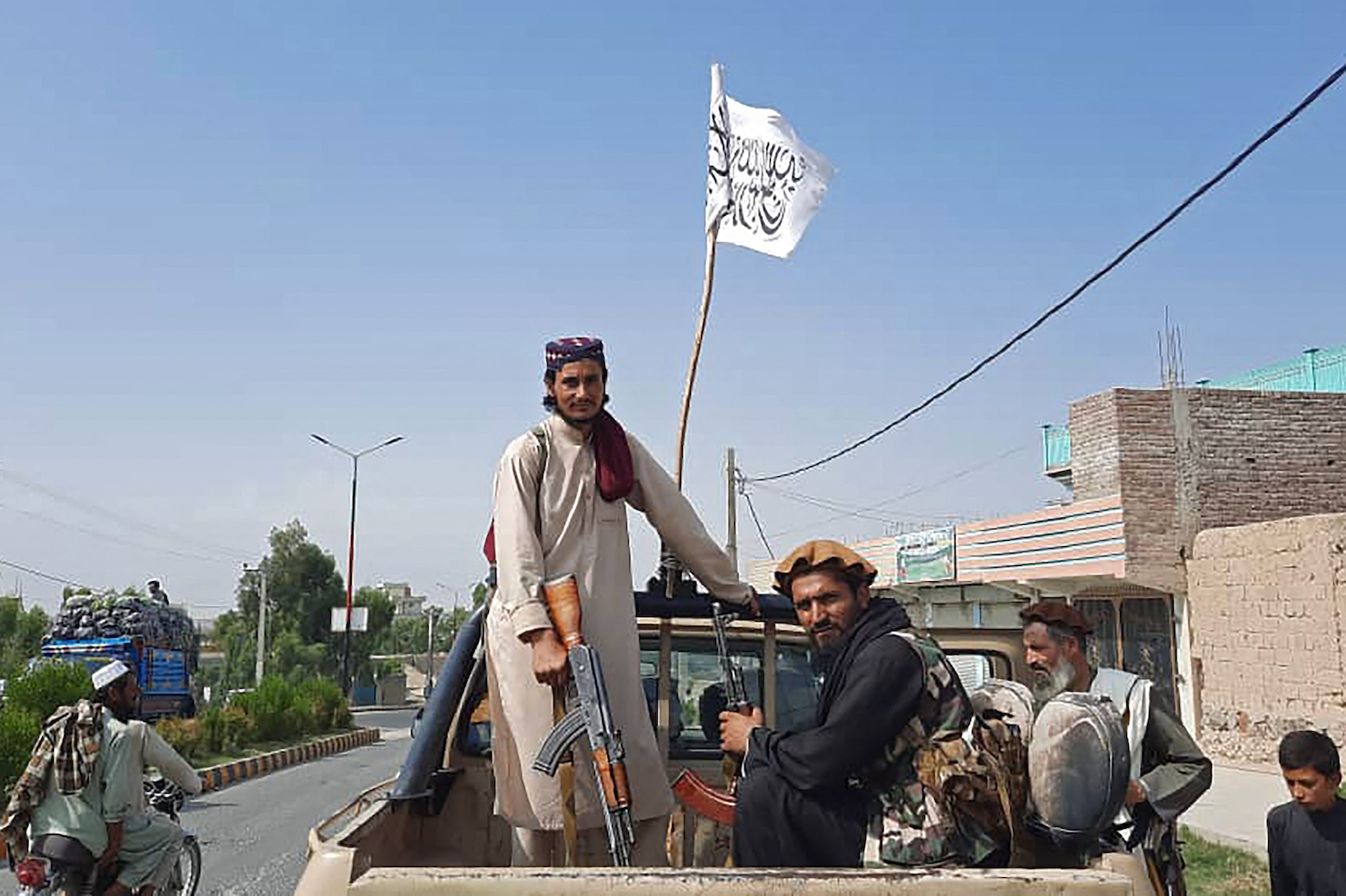 Less than two weeks after the Taliban seized its first provincial capital, the Afghan government is no more. The Islamist group has now retaken Kabul, President Ashraf Ghani has fled, and Western powers are scrambling to evacuate their embassy staff.

Even as U.S. Secretary of State Antony Blinken protested: “This is manifestly not Saigon,” on ABC on Sunday, thousands sought refuge at Kabul’s international airport in scenes that struck some observers as reminiscent of the fall of South Vietnam in 1975 as crowds fled toward departing aircraft.

One thousand more U.S. troops are now being deployed to Afghanistan to speed the exit mission, bringing total U.S. military numbers to 6,000 in the country. There were reports of five deaths amid gunfire at the airport on Monday morning, possibly due to a stampede, as desperate Afghans sought to board airplanes by climbing baggage chutes.

Ghani gone. While Ghani has fled—with some reports placing him in Uzbekistan or Tajikistan—his predecessor Hamid Karzai has stayed, as has Ghani’s one-time rival Abdullah Abdullah, with both remaining leaders offering to help facilitate a peaceful transition—presumably to complete Taliban control.

Taliban spokesman Mohammad Naeem told Al Jazeera that the “war is over” and that the makeup of its new government would be announced soon. Seeking to assuage concerns that the country would once again become a haven for terrorist groups like al Qaeda, Naeem said the group would “not allow anyone to use our lands to target anyone, and we do not want to harm others.”

Nation building no more. As U.S. officials wake up to a new reality for Afghanistan, the concept of U.S.-led nation building is in tatters, as Afghan National Security Forces funded to the tune of more than $80 billion offered little resistance to the Taliban’s takeover. Questions must also be asked of the U.S. intelligence community, whose June estimate of an Afghan government collapse within six to twelve months of U.S. withdrawal now seems generous, if not outright naive.

Some U.S. government agencies—like the Special Inspector General for Afghanistan Reconstruction (SIGAR), which has been ringing alarm bells over incompetence and corruption for years—found their warnings ignored.

The political cost. U.S. President Joe Biden, who as recently as July 8 deemed it “highly unlikely” that Taliban forces would overrun Afghan government forces, is expected to give a national address on Afghanistan early this week.

If the issue is to turn into an August political mud fight in Washington, it’s not clear how many Americans will be moved by the spectacle. A July poll by the Chicago Council on World Affairs found 70 percent of those surveyed supported Biden’s plans for withdrawal. Opinions are more split by party, with 56 percent of Republicans supporting withdrawal versus 77 percent of Democrats and 73 percent of independents.

The rationale. Speaking to NBC on Sunday, Blinken was at pains to point out that the Biden administration felt its hands were tied by a May 1 withdrawal deadline agreed with the Taliban by the previous administration: “If the president had decided to stay, all gloves would have been off. We would have been back at war with the Taliban attacking our forces. The offensive you have seen throughout the country almost certainly would have proceeded. … And I would be on your show right now explaining why we were sending tens of thousands of forces back into Afghanistan to restart a war that we need to end.”

New rulers. As Americans indulge in recriminations, Afghans face a new day and new rulers. Lynne O’Donnell, reporting for Foreign Policy from Kabul, observed a city where women are staying behind closed doors, bracing for life under the Taliban, and where government employees scramble to leave before they become targets. “Just trying to get out,” one Afghan government worker told O’Donnell. “All I can do is work on it, but who knows if anyone will be able to leave or just be forced here to wait for their own death.”

Haiti’s earthquake. At least 1,300 people have been killed and countless others have been injured in Haiti after a 7.2 magnitude earthquake struck the southwest of the country on Saturday. The disaster comes as Haiti braces for Tropical Storm Grace, which is expected to make landfall today. As humanitarian organizations rush to provide relief, local gangs have declared a temporary truce to speed the flow of aid to affected areas.

U.S.-South Korea drills. The United States and South Korea begin annual joint military drills today, a move likely to spark more discontent in North Korea, which has warned of a “serious security crisis” if the exercises go ahead. South Korean military officials have said that the 10-day exercise will mostly consist of computer-simulated training with minimal personnel and no live drills.

South Korea’s Joint Chiefs of Staff said the decision to hold relatively low-key drills was taken in consideration of the COVID-19 pandemic as well as “to support diplomatic efforts to denuclearize and foster lasting peace on the Korean peninsula.” North Korea has already signaled its displeasure with the drills by refusing to answer routine calls from South Korea after reconnecting a hotline in July.

Zambia’s next president. Opposition candidate Hakainde Hichilema was declared Zambia’s new president-elect by electoral authorities on Sunday following a decisive win with approximately 60 percent of the vote in the country’s Aug. 12 election.

His opponent, incumbent President Edgar Lungu has cried foul, calling the elections “not free and fair” saying election agents from his Patriotic Front party were chased from polling stations and that election violence in other provinces made the whole election a “nullity.” Hichilema, who lost to Lungu in the 2016 presidential election, has called Lungu’s statements the “desperate final act of an outgoing administration.” Zambia’s electoral commission has yet to respond to Lungu’s allegations.

Canada’s election. Canadian Prime Minister Justin Trudeau has officially announced an early parliamentary election for Sept. 20, two years before his term expires, as he attempts to seek a mandate for an $80 billion COVID-19 recovery plan. As campaigning begins, polls put Trudeau’s Liberal party in the lead but still short of an outright majority. Trudeau has been criticized by Conservative leader Erin O’Toole for holding the election while the country is still fighting its COVID-19 epidemic, accusing the prime minister of playing “political games.”

Modi’s infrastructure plan. India Indian Prime Minister Narendra Modi promised a $1.35 trillion infrastructure plan during an Independence Day speech on Sunday, pledging job opportunities for “hundreds of thousands” and a move toward cleaner energy sources in the world’s third largest carbon emitter. The specifics of the plan, dubbed “Gati Shakti,” have yet to be announced. In his speech, Modi also aimed for Indian energy independence by 2047, in part by making India a hydrogen fuel center.

Ebola in Ivory Coast. Ebola has appeared in Ivory Coast for the first time in 25 years after a Guinean woman was diagnosed with the virus on Saturday. The discovery has raised concerns over whether the woman had contracted the virus while in Guinea, which declared an end to an Ebola outbreak in June with the help of a recently developed vaccine. The World Health Organization has said it will investigate whether the two outbreaks are connected.

A Serbian cave-dwelling hermit has urged his compatriots to embrace COVID-19 vaccines as the country’s vaccination rate lags following a promising start. Panta Petrovic, who withdrew from society 20 years ago and now lives on the Stara Planina mountain in southern Serbia, heard about the global pandemic on a scavenging visit to the local town and promptly received his shots once they became available.

“It (the virus) does not pick. It will come here, to my cave, too,” Petrovic told AFP. Petrovic said he “doesn’t understand the fuss” surrounding vaccine hesitancy and wants to get a third shot in a drive that starts Tuesday.

After an initial vaccination drive that matched the fast pace of the United Kingdom’s, inoculation rates have slowed; an estimated 41 percent of Serbia’s population is now fully vaccinated.