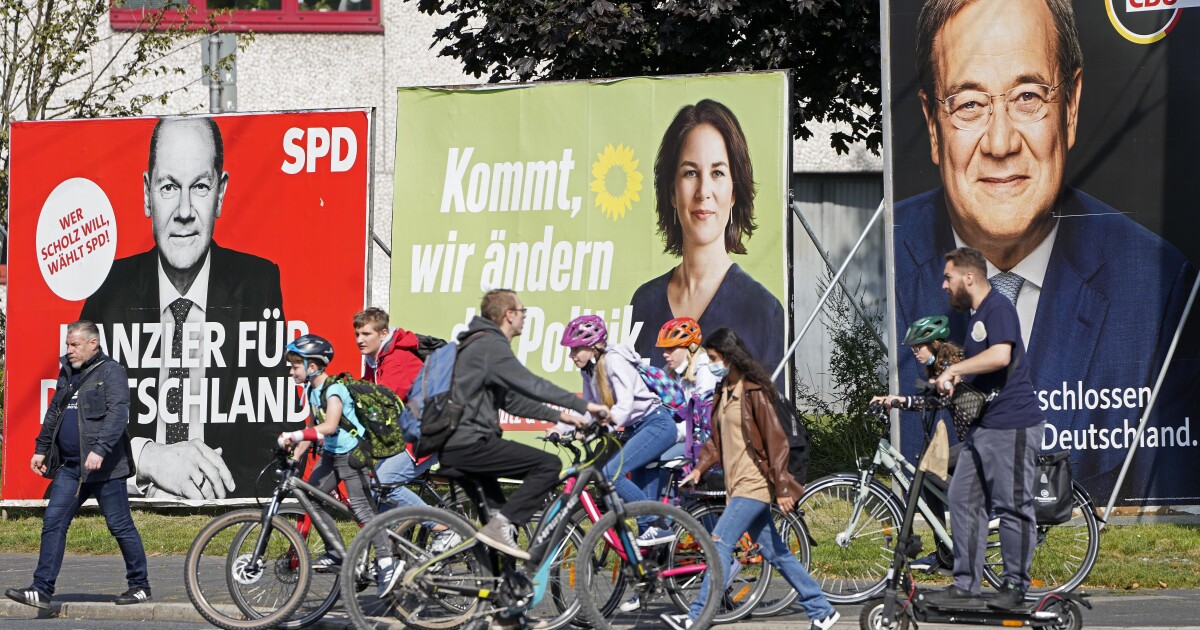 German voters were choosing a new parliament Sunday in an election that will determine who succeeds Chancellor Angela Merkel after her 16 years at the helm of Europe’s biggest economy.

Recent surveys show the Social Democrats marginally ahead. The environmentalist Greens, with candidate Annalena Baerbock, are making their first run for the chancellery, and polls put them several points behind in third place.

The Social Democrats have been boosted by Scholz’s relative popularity after a long poll slump, and by his rivals’ troubled campaigns. Baerbock suffered from early gaffes and Laschet, the governor of North Rhine-Westphalia state, has struggled to motivate his party’s traditional base.

About 60.4 million people in the nation of 83 million are eligible to elect the new Bundestag, or lower house of parliament, which will elect the next head of government.

No party is expected to come anywhere near an outright majority. Polls show support for all of them below 30%.

Such a result could mean that many governing coalitions are mathematically possible, and trigger weeks or months of haggling to form a new government. Until it is in place, Merkel will remain in office on a caretaker basis.

This election “will decide Germany’s direction in the coming years, and so it will come down to every vote,” Laschet said in Aachen, on Germany’s western border.

Scholz voted in Potsdam, just outside Berlin, saying he hopes voters “will make possible … a very strong result for the Social Democrats, and that citizens will give me the mandate to become the next chancellor of Germany.”

Also voting in Potsdam, Baerbock said her party is “hoping for a few more votes” than polls have predicted “so that we can achieve a real new departure in this country.”

Merkel has won plaudits for steering Germany through several major crises. Her successor will have to tend the recovery from the pandemic, which Germany so far has weathered relatively well thanks to large rescue programs that have incurred new debt.

Laschet insists there should be no tax increases as Germany pulls out of the pandemic. Scholz and Baerbock favor tax hikes for the richest Germans, and also back an increase in the minimum wage.

Germany’s leading parties have significant differences in their proposals for tackling climate change. Laschet’s Union bloc is pinning its hopes on technological solutions and a market-driven approach, while the Greens want to ramp up carbon prices and end the use of coal earlier than planned. Scholz has emphasized the need to protect jobs as Germany transitions to greener energy.

Foreign policy hasn’t featured much in the campaign, though the Greens favor a tougher stance toward China and Russia.

“I really thought hard about which candidate I want as next chancellor — until this morning I hadn’t made up my mind. None of the three really convinced me,” Bergmann added. “All seem fine as human beings, but I’m not sure they can do a good job as next chancellor.”

In the capital’s Kreuzberg district, a traditional leftwing stronghold, Jan Kemper, a 41-year-old manager at an online bank, said climate change and Germany’s slow pace of digitalization were among his main concerns. He praised Merkel’s crisis management style, but said key issues were left unattended.

“Previously, elections set the course for the next two to four years,” he said. “Now decisions have to be made that will affect the next generations.”

During the campaign, Laschet and other Union leaders claimed that Scholz and the Greens would form a coalition with the opposition Left Party, which opposes NATO and German military deployments abroad. Whether such a partnership is realistic is questionable, given foreign policy and other differences between the parties, but that line of attack may help turn out conservative voters.

Scholz has said he’d like a two-party coalition with the Greens, but that looks very optimistic. Absent a majority for that, his first choice would likely be an alliance with the Greens and the pro-business Free Democrats.

A coalition with those two parties is also Laschet’s likeliest route to power. The Greens favor an alliance with the Social Democrats, while the Free Democrats prefer one with the Union.

The result may also allow a repeat of the outgoing “grand coalition” of the traditional big parties, the Union and Social Democrats, under either Scholz or Laschet.

The far-right Alternative for Germany party is polling a little below the 12.6% it won to enter parliament in 2017, but won’t feature in any new government this time either. All other parties say they won’t work with it.

The Bundestag has at least 598 seats, but Germany’s complex voting system means it can be much larger. The outgoing parliament had a record 709 lawmakers; the new one is widely expected to be even bigger.

Also Sunday, voters in Berlin and in Mecklenburg-Western Pomerania in northeastern Germany — both states currently led by the Social Democrats — are electing new state legislatures.