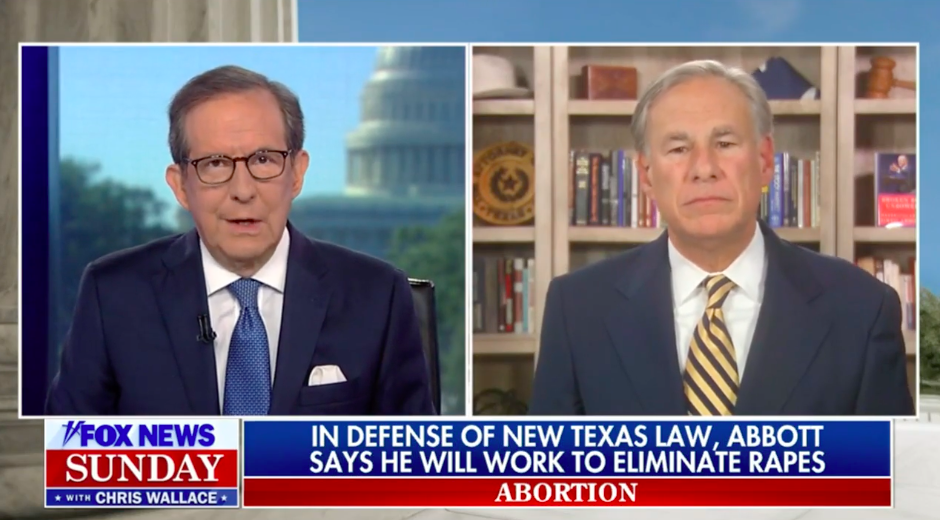 Texas Republican Gov. Greg Abbott had no answer Sunday when asked what victims of rape or incest should do under the state’s ultra-restrictive abortion law.

Headed to the often GOP-friendly confines of Fox News Sunday, Abbott ran into a buzzsaw in the form of Chris Wallace, who repeatedly pressed the governor on whether he would sign legislation granting an exception to those victims. Wallace noted that Abbott’s answer in the past has been a pledge to get tougher on people who commit rapes, but questioned whether that’s a “reasonable” approach: “Is it reasonable to say to somebody who was the victim of rape and might not understand that they are pregnant … until six weeks [later], ‘Well, don’t worry about it because we are going to eliminate rape as a problem in the state of Texas?’”

CHRIS WALLACE: Is it reasonable to say to a rape victim who might not know they’re pregnant until 6 weeks, ‘don’t worry about it, because we’re going to eliminate rape’?

GREG ABBOTT: The goal is to protect the lives of every child with a heartbeat pic.twitter.com/o7rJ5G6JZF

The governor also attempted to make a point about the death penalty before Wallace pressed again for a definitive answer, asking if he would support a bill to restore exceptions for rape and incest. “Well, we’ve got to go back, Chris, to what the reason was why the law was passed in the first place,” he said, “and the goal is to protect the lives of every child with a heartbeat.”

The law, which took effect in September after the Supreme Court refused to hear a challenge to it, effectively bans abortion in the state at six weeks of pregnancy — before many women even know they are pregnant. The law has survived in court because rather than using the legislature to ban a law, it has basically created a legal bounty system, allowing individuals to sue anyone involved in providing an abortion after six weeks. Potential lawsuit targets include everyone from medical professionals to those who as much as give an abortion-seeker a ride to a clinic.

Before concluding the interview, Wallace tried once more to get the Republican governor to pledge to support a bill carving out exceptions for rape and incest, as one GOP legislator in his state has proposed. But again, Abbott declined to answer, asserting that such a scenario is “a hypothetical that’s not going to happen because that bill is not going to reach my desk.”