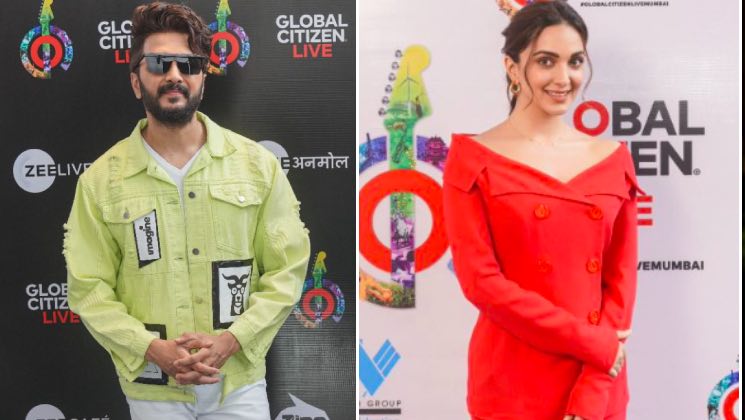 The Global Citizen LIVE 2021 has definitely created momentum on social media. Fans across the globe are seen attending and contributing to the live concert. Actor Priyanka Chopra who was hosting the event in Paris recently concluded it in the country. The Global Citizen Live concert will now take place in India as well where stars like Amit Trivedi, Ajay-Atul, Badshah and Tanishk Bagchi will give a banging performance, along with appearances by Sachin Tendulkar, Madhuri Dixit and Varun Dhawan.

For the outing, Kiara who is currently heaping praises for her role in the recently released film, Shershaah, also starring Sidharth Malhotra, was seen putting her best fashion foot forward. She was seen wearing a red hot ensemble. Wearing an off-shoulder blazer jacket and matching trousers, Kiara’s power dressing has impressed us. She let her two strands fall lightly on her cheeks, dewy makeup and gold earrings, Kiara looked beautiful.

Whereas the Houseful actor was seen showcasing his quirky side. Wearing a light green denim jacket along with a white t-shirt and white pants, Deshmukh looked cool and casual. He teamed his look with black converse and black sunnies.

Also read: Everything you need to know about the Global Citizen Festival in Mumbai and around the globe