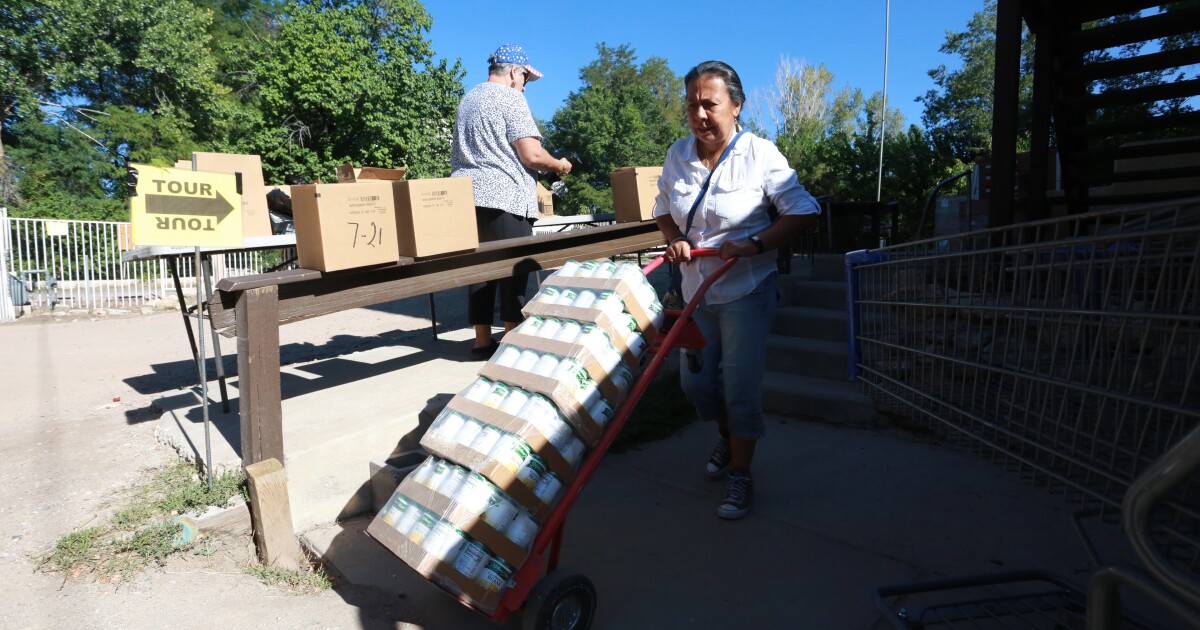 Many Americans struggling to feed their families over the past pandemic year say they have had difficulty figuring out how to get help and had trouble finding healthy foods they can afford.

A poll from Impact Genome and the Associated Press-NORC Center for Public Affairs Research finds 23% of Americans say they have not been able to get enough to eat or the kinds of foods they want. Most of those facing food challenges enrolled in a government or nonprofit food assistance program in the past year, but 58% still had difficulty accessing at least one service.

And 21% of adults facing challenges meeting their food needs were unable to access any assistance at all. The most common challenge to those in need was a basic lack of awareness of eligibility for both government and nonprofit services.

The poll results paint an overall picture of a country where hundreds of thousands of households found themselves suddenly plunged into food insecurity due to the economic disruption of the COVID-19 pandemic. They often found themselves navigating the intimidating bureaucracy of government assistance programs and with limited knowledge of local food banks or other charitable options available.

Black and Latino Americans, Americans living below the federal poverty line and younger adults are especially likely to face food challenges, according to the poll.

Americans who have a hard time affording food also feel less confident than others about their ability to get healthy food. Just 27% say they are “very” or “extremely” confident, compared with 87% of those who do not face food challenges.

For homemaker Acacia Barraza in Los Lunas, a rural town outside Albuquerque, the challenge has been to find a steady supply of fresh fruits and vegetables for her 2-year-old son while staying inside the family budget.

Barraza, 34, quit her job as a waitress before the pandemic when her son was born. She considered going back to work, but on-and-off child care shortages as the pandemic took hold made that impossible, she said. The family lives off her husband’s salary as a mechanic while receiving assistance from SNAP — the government program commonly known as food stamps.

Despite the government help, Barraza said she still scrambles to find affordable sources of fresh vegetables, actively scouring local markets for bargains such as a bag of fresh spinach for $2.99.

“If we don’t always have vegetables, he’s going to not want to eat them in the future. And then I worry that he’s not going to get enough vitamins from vegetables in the future or now for his growing body. So it’s really hard. It’s just really hard,” she said.

Even those who didn’t lose income during the pandemic find themselves stretching their food dollars at the end of the month. Trelecia Mornes of Fort Worth, Texas, works, as a telephone customer service representative, so she was able to work from home without interruption.

She makes too much money to qualify for SNAP, but not enough to easily feed the family.

She decided to do distance learning with her three children home because of fears about COVID-19 outbreaks in the schools, so that removed school lunches from the equation. Her work responsibilities prevent her from picking up free lunches offered by the school district. She takes care of her disabled brother, who lives with them and does receive SNAP benefits. But Mornes said that $284 a month “lasts about a week and a half.”

They try to eat healthy, but budget considerations sometimes lead her to prioritize cost and longevity with “canned soups, maybe noodles — things that last and aren’t so expensive,” she said.

Radha Muthiah, president of the Capital Area Food Bank in Washington, said the struggles reflected in the poll are evidence of a new phenomenon brought by the pandemic: Families with no experience with food insecurity are suddenly in need, without knowledge of charitable options or experience navigating government assistance programs.

“It’s all new to them,” she said. “Many individuals and families — especially those experiencing food insecurity for the first time — are unaware of their full range of options.”

Many are leery of engaging directly with government programs such as SNAP and WIC — the parallel government food-assistance program that helps mothers and children. Muthiah said that reluctance often stems from either frustration with the paperwork or, among immigrant communities, fear of endangering their immigration status or green card applications.

Part of the issue is simply habit, Muthiah said, but a much larger problem is the lack of proper grocery stores in in poorer parts of many cities.

“Sometimes they are the only quick efficient option for many people to get food,” she said. “But they don’t get the full range of what they need from a convenience store and that leads to a lot of negative health outcomes.”

The poll shows half of Americans facing food challenges say extra money to help pay for food or bills is necessary for meeting their food needs.

Fewer consider reliable transportation or enough free food to last a few days, such as in emergency food packages, or free prepared meals at a soup kitchen or school to be necessary resources for meeting their food needs, though majorities say these would be helpful.

Gerald Ortiz of Espańola, N.M., bought a 2019 Chevy pickup truck before the pandemic, then lost the office job he had held for 20 years. Now he scrambles to make the $600 monthly payment and gets by through charity and by simply eating less. His unemployment payments ended this month.

“I make sure my truck payment is done,” said Ortiz, as he sat in a line of about 30 cars waiting to pick up food from a charitable organization, Barrios Unidos, in nearby Chimayó. “After that I, I, just eat like once a day,” he said, pointing to his stomach. “That’s why you see me I’m so thin now.”

He’s applying for multiple jobs and surviving on charity and whatever produce he can grow in his backyard — chili peppers, onions, cucumbers and watermelons.

“It’s been depressing. It’s been, like, stressful and I get anxiety,” he said. “Like, I can’t wait to get a job. I don’t care what it is right now.”