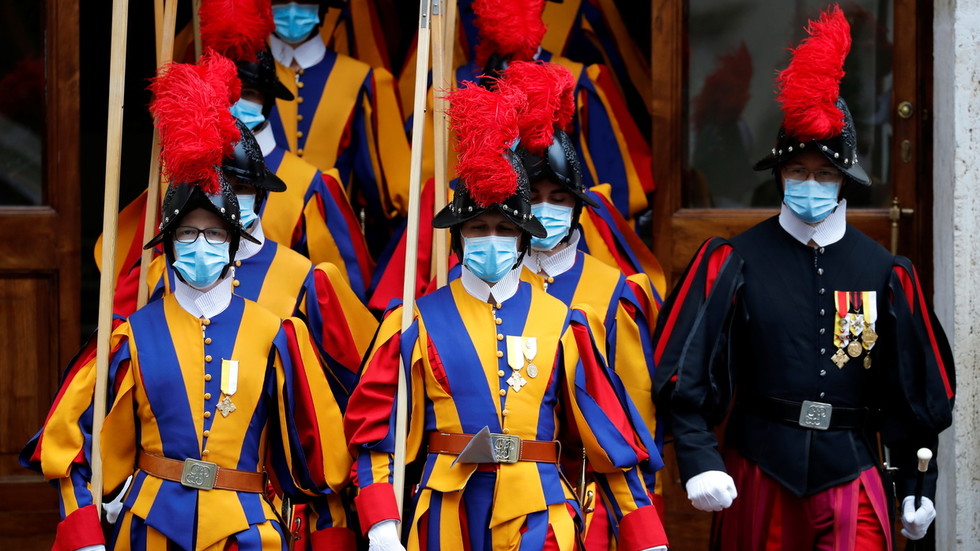 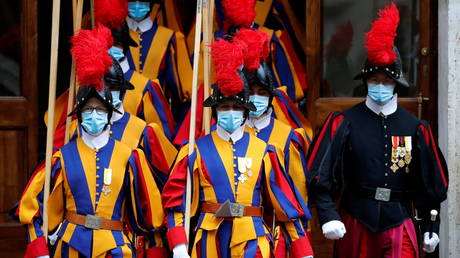 Three Swiss Guards have resigned ‘voluntarily’ from the ceremonial Vatican force, while several others have been suspended, after the Holy See ordered the troops to get vaccinated against Covid-19 without any religious exemptions.

While other Vatican staff and visitors have an option to undergo regular Covid-19 tests to maintain their Green Pass status, all Swiss Guards had been ordered to get a jab “to protect their health and that of the others they come into contact with as part of their service,” the unit’s official Lt. Urs Breitenmoser told AP.

Three members of the Guard have chosen not to adhere to that request, voluntarily leaving the corps.

Besides the three guardsmen sent back to Switzerland, at least three others were suspended from active duty after they agreed to vaccinate but have yet to receive their jabs. Swiss Guard is a small 135-strong all-male corps of Swiss soldiers, serving as a ceremonial unit, known for their tricolor Renaissance-style uniforms, as well as pontiff’s personal bodyguards.

Also on rt.com
Vatican hails vaccinations as ‘one of the greatest achievements’ of modern science in push against vaccine skepticism

Since October 1, all residents, employees and visitors must provide a valid health certificate – the so-called Green Pass used in Italy and other EU states – to enter the city state grounds. There are no religious exemptions, except for those specifically invited to attend mass “for the time strictly necessary for the rite.”

Those who oppose vaccination on religious grounds have often cited the use of cells from fetuses aborted decades ago in the development of immunizations, including in those aimed to combat Covid-19. The Congregation for the Doctrine of the Faith – the oldest among the nine congregations of the Roman Curia – declared last year that, so long as no other option is available, it is morally acceptable to receive such vaccines.

And while the Pontifical Academy for Life, the official bioethics academy of the Catholic Church, has argued there is a “moral responsibility” to vaccinate, it did not go so far as to mandate the jab for all Catholics. The decision was left with Pope Francis, who previously denounced any apprehension about vaccines as “suicidal denial,” and more recently stated that getting a Covid jab that is “authorized by the respective authorities” is an “act of love.”