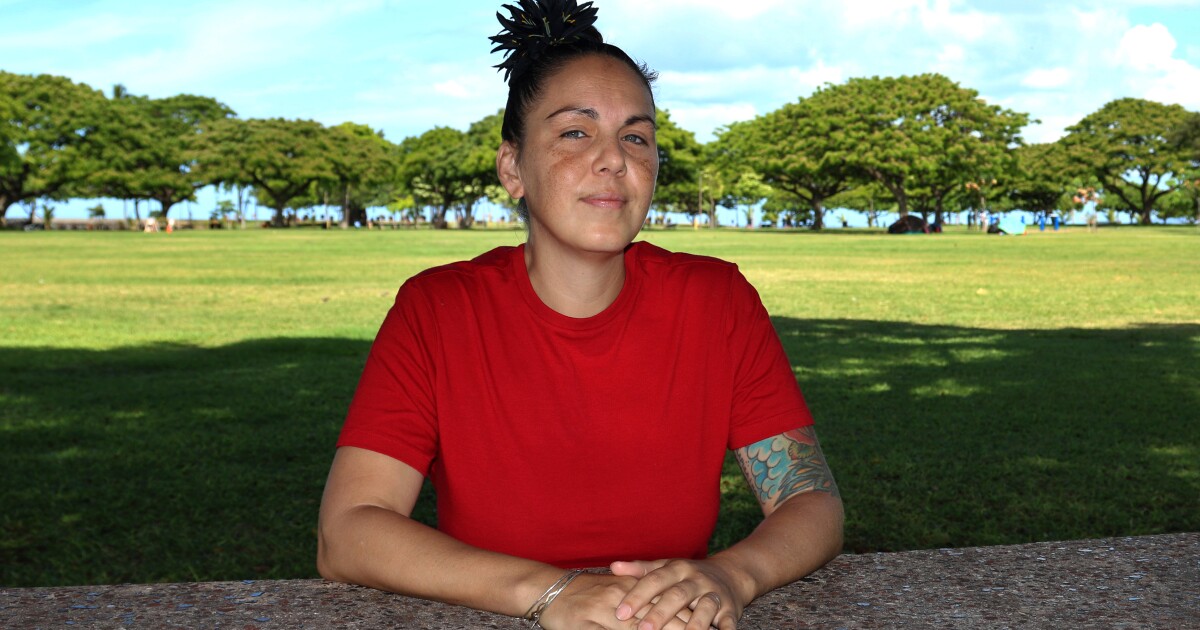 At first, he was just a boyfriend. He gave Ashley Maha’a gifts and attention. But then he gave her drugs and became controlling and abusive. He would punish her for breaking ambiguous, undefined “rules,” only to later say he was sorry and shower her with flowers and lavish presents.

After a while, he led the Honolulu high school senior — a 17-year-old minor — into Hawaii’s commercial sex industry.

“I shouldn’t be here with everything that was going on. I should be dead. And the majority of the people who are in my situation are missing or dead,” said Maha’a, who is Native Hawaiian.

Maha’a escaped that world years ago and is now a married mother of four. But it’s on her mind as she joins a new task force studying the issue of missing and murdered Native Hawaiian women and girls. She reminds herself of her plight every day so she can fight for others similarly trapped and vulnerable.

The panel, created by the state House this year, aims to gather data and identify the reasons behind the problem. As of now, few figures exist, but those that do suggest Native Hawaiians are disproportionately represented among the state’s sex trafficking victims.

Its work comes amid renewed calls for people to pay more attention to missing and killed Indigenous women and girls and other people of color after the recent disappearance of Gabby Petito, a white woman, triggered widespread national media coverage and extensive searches by law enforcement. Petito’s body was later found in Wyoming.

Several states formed similar panels after a groundbreaking report by the Urban Indian Health Institute found that of more than 5,700 cases of missing and slain Indigenous girls in dozens of U.S. cities in 2016, only 116 were logged in a Justice Department database.

Wyoming’s task force determined 710 Indigenous people disappeared there between 2011 and September 2020 and that Indigenous people made up 21% of homicide victims even though they are only 3% of the population. In Minnesota, a task force led to the creation of a dedicated office to provide ongoing attention and leadership on the issue.

The Urban Indian Health Institute’s report didn’t include data on the state of Hawaii because the organization is funded by the Indian Health Service, a U.S. agency that serves Native Americans and Alaska Natives but not Native Hawaiians. The Seattle institute didn’t have the resources to extend the study to the islands, Director Abigail Echo-Hawk said.

It’s not the first time Native Hawaiians have been sidelined in the broader national conversation. The federal government’s efforts to tackle the problem of missing and murdered Indigenous women often focus on Native Americans and Alaska Natives — in part because it has authority over major crimes on most tribal lands, and Native Hawaiians don’t have such lands in the same sense as many other U.S. Indigenous communities. An Interior Department spokesman said it instead works to support and collaborate with state programs in the islands.

Yet Hawaii faces many of the same challenges as other states, including a lack of data on missing and murdered Indigenous women. The precise number of nationwide cases is unknown because many have gone unreported or have not been well-documented or tracked.

Public and private agencies don’t always collect statistics on race. And Native Hawaiians are grouped with other Pacific Islanders in some data, making it impossible to identify the degree to which Hawaii’s Indigenous people are affected. About 20% of the state’s population is Native Hawaiian.

Representatives from the Hawaii State Commission on the State of Women and the Office of Hawaiian Affairs, a semiautonomous state agency directed by Native Hawaiians, are leading the task force. The panel also includes members from state agencies, county police departments and private organizations.

Khara Jabola-Carolus, executive director of the commission and co-chair of the task force, suspects its work will show Hawaii’s large tourism industry and military presence fuel sex trafficking. Money to be made from these sectors gives people an incentive to take girls and women from their families, she said.

“It’s not like someone is kidnapped off the street. It’s that person is enticed and convinced to cut off their family if they’re a child, or a teenager,” Jabola-Carolus said.

Maha’a said the extent of the commercial sex industry in Hawaii also is illustrated by the number of girls and women brought to the islands from other states.

“I’ve met so many people on the mainland, and so, so, so many of them have told me that when they were being trafficked nationally, they would be flown here for a period of time and work here when things were slow, because the demand is so high,” Maha’a said.

Advocates say a number of systemic issues contribute to the problem. Native Hawaiians have the highest poverty rate — 15.5% — of any of the five largest racial groups in Hawaii, which is also one of country’s the most expensive places to rent or own property.

The history of colonization has torn Native Hawaiians from their land, language and culture, similar to Indigenous communities in other states.

Rosemond Pettigrew, board president of Pouhana ‘O Na Wahine, a grass-roots collective of Native Hawaiian women advocating against domestic and sexual violence, said land is considered family, and not being connected to it severs Native Hawaiians from their past.

“When you separate yourself from what you know or what you believe, and you’re no longer on land, then you’re left where you don’t know where you come from and who you are, and your identity becomes lost,” she said.

Echo-Hawk, of the Urban Indian Health Institute, said Hawaii’s task force is “monumental” and necessary to understanding the full scope of the problem.

She suspects some of its biggest obstacles will be in getting cooperation from law enforcement agencies and not having dedicated funding. Lawmakers didn’t allocate any money to the panel, so its members are relying on existing resources to do their research. The most successful state task forces had funding, Echo-Hawk said.

It will be important for the task force to recognize the problems are rooted in government policies, said Paula Julian, senior policy specialist with the Montana-based National Indigenous Women’s Resource Center. The solutions for Native Hawaiians, meanwhile, must come from Native Hawaiians, she said.

Pettigrew said she’d like to see resources put into prevention. For example, Hawaii’s public schools could teach students about healthy relationships, starting as early as elementary grades. Lessons could address dating once students get to middle and high schools.

State Rep. Stacelynn Eli, a Native Hawaiian and a Democrat who sponsored the resolution creating the task force, said she has friends and classmates who were trafficked. She doesn’t want her nieces to face the same thing because no one knew enough to take action.

“We are surviving, and I would like to see our people get to a point where we are thriving. And I think we won’t get to that point until we know for sure that we are protecting our Native women and children and holding those who try to harm them accountable,” she said.

The panel is expected to produce reports for the Legislature by the end of 2022 and 2023.