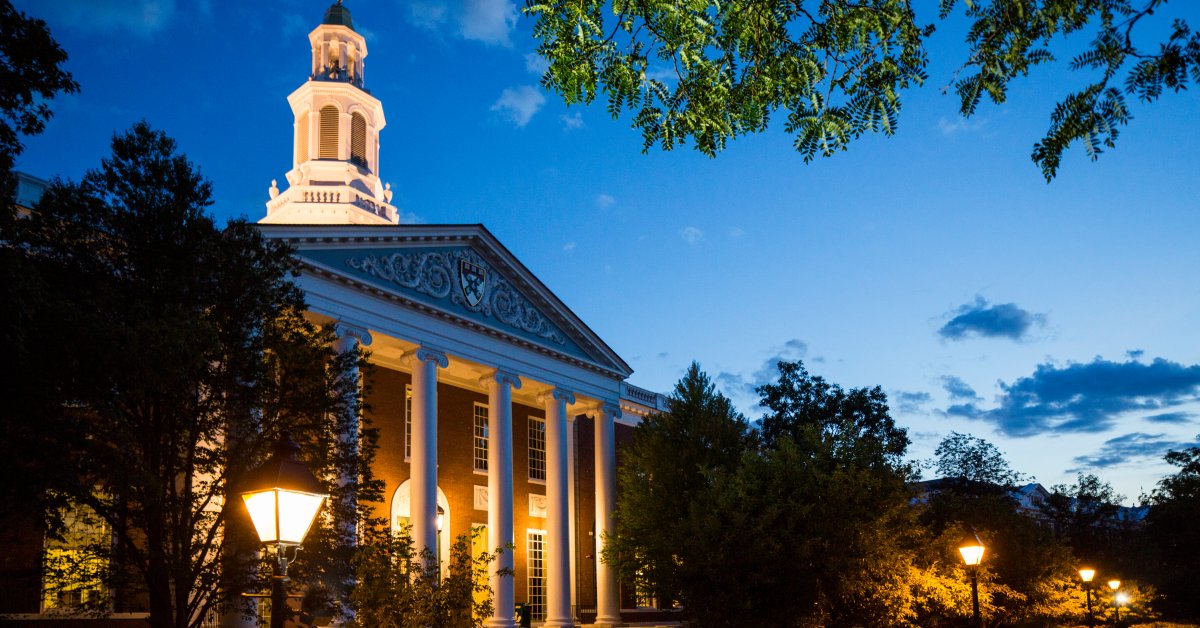 Tima Bansal begins every new course with a cautionary statistic for her business school students. A 2008 study found that MBA candidates enter business school with more community-oriented values, but graduate with more selfish ones. “They come in caring about the world, and they leave caring more about themselves. Why?” she says.

Bansal, a professor at Ivey Business School in London, Ontario, thinks she knows the answer. “At the heart of every single course that we teach is this orientation toward profit or leadership or themselves,” says Bansal, one of a growing number of academics who want to change that. MBA programs, they say, can no longer justify teaching future business leaders to maximize profits at the expense of the planet. The way Bansal and others see it, the world would be a better place if more businesses played an active role in tackling social and environmental challenges, from climate change to global poverty. And if the leadership ranks of major companies don’t adjust the way they do business, they warn, their fixation on making money and rewarding shareholders will exacerbate inequality and climate disasters.
[time-brightcove not-tgx=”true”]

“We have a crisis on our hands, and business schools need to act,” Bansal says.

<strong>“We have a crisis on our hands, and business schools need to act.”</strong>The world’s major corporations stand at a crossroads. Many Boomer and Generation X executives have grudgingly come to the realization in recent years that they can no longer straddle the fence or remain silent on thorny social and political issues. To attract and retain the best and brightest Millennial and Gen Z employees, companies are facing pressure to express their opinions and take action on critical matters, including racial injustice, climate change and income inequality. A majority of college students (68%) say companies should take public stances on social issues. Another 16% said they wouldn’t work for a company that did not, according to a recent Axios/Generation Lab poll. Another survey, by Washington State University’s Carson College of Business, found that 70% of Gen Z employees want to work for a company whose values align with their own, and 83% want to work for a company that has a positive impact on the world.

That demand is reflected in the young people seeking business graduate degrees. At Boston University’s Questrom School of Business, the number of students in the Social Impact MBA program has nearly doubled in the last decade, growing from 79 in 2011 to 155 in 2021. Since leaders at the University of Vermont ripped up the 1970s-era MBA format and redesigned it around sustainability—the term used to describe businesses that are environmentally and socially conscious—the program has grown from 20 students in 2014 to 47 in 2021. They’re considering expanding the program to 70 or 80 students after receiving a record number of applications last year.

Companies are also facing pressure from consumers who increasingly want to buy eco-friendly, ethical products from businesses that share their values. Nearly 80% of consumers say it’s important that brands are sustainable and environmentally responsible, according to a 2020 study by IBM and the National Retail Federation, which polled consumers in 28 countries. A majority (57%) of those consumers say they’re willing to change their shopping habits in order to reduce the negative impact on the environment.

For the first time this semester, Presidio Graduate School in San Francisco offered MBA students an eight-week elective course on promoting anti-racism in the workforce, adding to courses on leading inclusive organizations, prioritizing social justice in supply chains and exploring renewable energy systems. Liz Leiba—an adjunct professor teaching the course, which covers the advantages and challenges of building a diverse workplace and how to identify discrimination and bias—thinks it should be required for all students. “Diversity sometimes has been an afterthought,” she says. “Marketing is not an afterthought. Sales is not an afterthought.”

Read more: What Happened When Facebook Shut Down the Team That Put People Ahead of Profits

The movement amounts to a fight for the hearts and minds of tomorrow’s business leaders by changing how MBA students are educated. “Can we possibly justify teaching students to go out and profit their investors by depleting society and the rest of the planet?’ It’s just not a viable ethical position,” says Tom Lyon, faculty director of the Erb Institute for Global Sustainable Enterprise at the University of Michigan’s Ross School of Business.

But change has been slow. Universities are large, traditional institutions that tend to stick with what they know, and many major business schools have not overhauled tried-and-true programs, instead offering one-off courses on sustainability or ethics.

<strong>“We can’t do business as usual. We have to do new business.”</strong>Maggie Winslow, the academic dean at Presidio, which aims to include sustainability and social justice in every business course, says when she offered to help the dean of another business school start a sustainability curriculum, she was told “that’s just a fad.”

Lyon has struggled to get concepts such as sustainability and corporate political responsibility fully integrated into the core curriculum and notes that there hasn’t been a critical mass of students or donors demanding that change. “It’s like the MBA core is the inner sanctum of the religion of business schools. And every area feels like, ‘I have my sacred concepts I must teach, and I cannot make room for these sort of nice, but superfluous ideas,’” Lyon says.

And many of the business schools that have been leading the charge on this front are not among the country’s top-ranked MBA programs, suggesting that the most competitive business schools are hesitant to disrupt a time-tested curriculum.

But as the world experiences the devastating effects of climate change and the country confronts centuries of racial injustice, many professors argue that change has never been more urgent. “It’s an all-hands-on-deck kind of moment,” Lyon says. “We’re close to a point of turning the planet into a place that is much less inhabitable than it’s been for the last millennium.”

Dartmouth founded the first graduate school of management in 1900 with the Tuck School of Business, and Harvard launched the world’s first MBA program in 1908. The MBA has since grown to be the most popular postgraduate degree in the country, making up 24% of all master’s degrees earned in the 2018-19 school year, according to the National Center for Education Statistics.

But the world has changed dramatically since the MBA first became a rite of passage for business leaders, raising questions about whether courses in marketing, microeconomics and finance are a sufficient foundation for business leadership. MBA applications surged as the pandemic caused economic challenges and mass unemployment, but business schools had been contending with several years of declining applications before that.

“Business schools are still operating out of a 50-year-old paradigm. And I think that’s the fundamental problem,” Lyon says. “All the businessman had to do was just maximize profits, play within the rules, and everything was fine. And the problem is, our rules need to be changed. The system isn’t really working anymore.”

Climate change is expected to cost the global economy as much as $23 trillion by 2050, according to a 2021 report by the insurance company Swiss Re. And a reckoning over racial injustice has intensified calls for corporations to do more to promote equity and and diversity.

The demand is coming from corporations too. In June, the accounting firm PricewaterhouseCoopers announced it would invest $12 billion over five years to create 100,000 new jobs, many with an environmental, social, and governance (ESG) focus.

Read more: Wildfires Are Getting Worse, So Why Is the U.S. Still Using Wood to Build Homes?

“Student demand is increasing. You can see employers are seeking graduates with these skills and knowledge. There’s demand from society for business schools to positively contribute to tackling some of these grand societal challenges,” says Caroline Flammer, co-faculty director of Questrom’s social impact program. She teaches a course called Social Impact: Business, Society, and the Natural Environment, which she thinks should be required for any MBA student. “In my view, the Social Impact MBA program should be the MBA program.”

<strong>“Student demand is increasing. You can see employers are seeking graduates with these skills and knowledge.”</strong> At Michigan, Lyon teaches a course on the economics of sustainability to undergraduates and a course on energy markets and energy politics to graduate students. He’s working on building a task force on corporate political responsibility, aiming to confront the way companies too often “focus on their own short term profits at the expense of the larger society.” He would like to see the concepts of ethics, sustainability and political responsibility fully integrated throughout all MBA courses, not just tacked on as a single course.

That’s how Sanjay Sharma, dean of the University of Vermont’s Grossman School of Business, redesigned the school’s MBA program, with sustainability embedded in every subject. Students learn about impact investing, carbon pricing and analyzing social and environmental risks. They explore all case studies through a lens of environmental and social justice impacts.

Sustainability has been part of the core curriculum at Ivey, in Ontario, since 2003. When Bansal first began integrating business sustainability into strategy, finance and marketing courses—teaching students to take a long-term view and to consider social and environmental impacts in business decisions—she confronted the perception that environmental issues didn’t belong in business education. Now, she hears from students who say they “desperately need more” of these classes.

She thinks MBA programs need to do a better job of preparing students to solve today’s global challenges. “You have to have corporations that build products that solve not just their own profits, but products that actually make the world better,” she says. “That requires a different type of thinking.”

Sharma knows that MBA programs like his, built entirely around sustainability, are still niche. Top-ranked business schools with powerful brands don’t seem eager to upend successful programs that are still attracting thousands of applicants willing to spend as much as $200,000 for their degrees and producing highly employable graduates.

“Business moves faster than academia,” Sharma says. but he thinks all business schools will be forced to adapt eventually. “If organizations demand it and if society demands it, then it’ll start happening faster.”

He and his peers are confronting a lingering stigma that courses on sustainability or social justice are nice, but not essential. “I wish I could say the vast majority of Ross students were beating down the doors for ethics and sustainability. And, you know, they’re not,” Lyon says. “The real drivers are student demand and donors. So if students start saying, ‘We have to have this material,’ schools will change.”

For university leaders, there’s nothing simple about revamping decades-old curricula or persuading tenured faculty to change their courses. But the global realities of climate instability and resource shortages could force their hand.