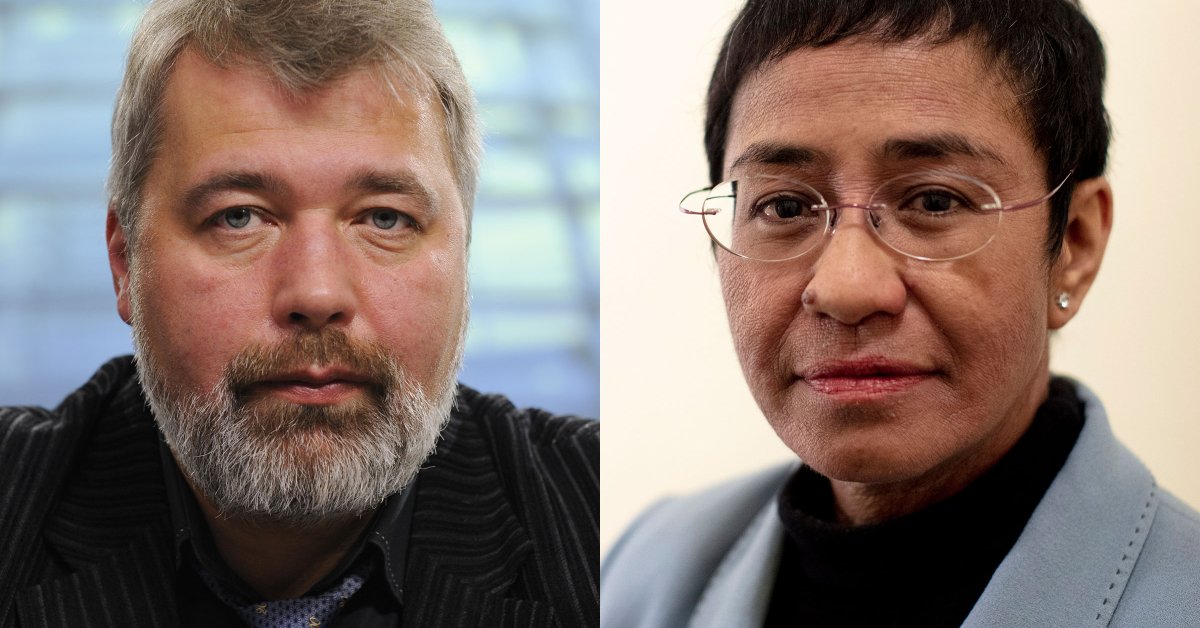 The 2021 Nobel Peace Prize has been awarded to two fighters for a free press: Maria Ressa of the Philippines and Dmitry Muratov of Russia. The Norwegian Nobel Committee cited their fight for freedom of expression, stressing that it is vital in promoting peace.

“Free, independent and fact-based journalism serves to protect against abuse of power, lies and war propaganda,” said Berit Reiss-Andersen, chair of the committee.

The fact that the Nobel committee honored two journalists — Ressa, the CEO of Filipino news site Rappler, and Muratov, the former editor of independent Russian newspaper Novaya Gazeta — seems intended to underscore the necessity of freedom of expression to functioning democracies, in a year marked by increased weaponization of social media and attacks on journalists pursuing truth. According to Reporters Without Borders (RSF) 2021 World Press Freedom Index, the situation for press freedom is “difficult or very serious” in 73% of the 180 countries it evaluates, and “good or satisfactory” in only 27%.
[time-brightcove not-tgx=”true”]

Earlier this year, literary and human rights organization PEN America warned that repressive governments are ramping up efforts to censor, surveil, and punish dissenters under the guise of “digital sovereignty.” Examples include the Indian government forcing Twitter and Facebook in April to remove posts critical of its handling of the COVID-19 pandemic, and the Nigerian government banning Twitter in June after the platform removed a post from President Muhammadu Buhari which critics say revived civil war sentiments.

In a phone interview, Director of International Campaigns for Reporters Without Borders, Rebecca Vincent, said she thought the Committee’s decision to award journalists fighting for press freedoms was “strategic.”

“The global situation for press freedom is more challenging than ever before,” she said. “The Committee recognized what we at Reporters Without Borders believe, which is that safeguarding of free expression is a precondition for democracy and lasting peace.”

Press freedom under threat in Philippines and Russia

The Philippines ranks 138 out of 180 countries in the RSF’s global index. Since winning the presidency in 2016, Rodrigo Duterte has moved the country further towards authoritarianism, imposing policies of fear and repression.

He immediately made known his intention to stifle free expression in an open threat to journalists: “Just because you’re a journalist, you are not exempted from assassination if you’re a son of a bitch,” he said. “Freedom of expression cannot help you if you have done something wrong.” Four journalists were killed in 2020, and reporters critical of Duterte’s bloodthirsty “war on drugs” have been pressured, harassed and intimidated. At the height of the pandemic in summer 2020, the Philippine Congress refused to renew the franchise of the country’s biggest TV network, ABS-CBN.

Read more: ‘What Will You Sacrifice for the Truth?’ Maria Ressa Discusses Disinformation and Social Platforms With Prince Harry and Renée DiResta

Facebook has become the battleground for public disinformation campaigns. In the Philippines, Facebook’s “Free Basics” program allows mobile phone users to access the platform and the internet for free, making the social media giant the go-to source for news in the country—78% of the country’s population use Facebook. Duterte’s regime has taken advantage of this, using state-controlled fake accounts to spread untruths and harass vocal critics.

Russia ranks even lower down the RSF Index: 150 out of 180 countries. Over the past decade, the Kremlin has sought to control online information by censoring or removing content and blocking mobile Internet access. In 2019, Russia introduced controversial technology to limit traffic to Twitter and a year later passed a law to increase fines on internet platforms for failing to remove information the state considers unsuitable.

Since prominent Kremlin critic Alexei Navalny—who was one of oddsmakers’ favorites to win the Peace Prize—was detained by authorities in January, journalists covering protests against his arrest have been subjected to harassment, fines and even violence. The Kremlin is aiming towards a “sovereign internet,” whereby media or information which challenges the regime is banned and dissenting journalists are branded “foreign agents.” State-controlled media feeds propaganda to Russian civilians and trumped up charges are used to imprison reporters and bloggers.

What to know about Maria Ressa and Dmitry Muratov

Maria Ressa was named TIME’s Person of the Year 2018 as part of The Guardians and the War on Truth, a group of journalists fighting for press freedoms around the world. The Filipino-American was a CNN bureau chief before setting up an online news outlet, Rappler, with three other women in 2012.

Read More: Time Person of the Year 2018: The Guardians and the War on Truth

Rappler became known for accurate, challenging reporting chronicling Duterte’s “war on drugs” and extrajudicial killings that have left over 12,000 dead. Duterte’s government refuses to accredit Rappler to cover it and is attempting to silence the platform using what RSF calls “judicial harassment.” Both the site and its founder face multiple criminal charges, including cyber libel—if found guilty, Ressa faces up to six years in prison.

In 2016, after months of studying data and traffic on the platform, Ressa’s team uncovered a network of state-controlled fake accounts spreading fake news on Facebook. She unsuccessfully attempted to lobby the social media giant into action to regulate the content, and herself became the victim of a vicious harassment campaign on the platform, with government supporting accounts threatening violence and spreading the hashtag, #UnfollowRappler.

The other joint winner of this year’s Nobel Peace Prize, Dmitry Duratov is one of the founders of the independent Russian newspaper Novaya Gazeta in 1993. “Novaya Gazeta is the most independent newspaper in Russia today, with a fundamentally critical attitude towards power,” the Nobel committee said.

The newspaper’s critical stance towards the Putin regime has made its reporters targets of the Kremlin—six of its reporters have been killed in the paper’s nearly two decade history. One of the assassinated reporters, Anna Politkovskaya, was killed 15 years ago yesterday. She gained international recognition for her coverage of Chechnya and the North Caucasus.

Muratov is the first Russian to win the Nobel peace prize since Soviet leader Mikhail Gorbachev in 1990, who himself helped set up Novaya Gazeta with the prize money.

How the world reacted to their win

In a post on Rappler’s Facebook page following her Nobel win, Ressa repeated her career-long mantra for journalists in the Philippines to “hold the line.” In another interview, she said that the Committee’s choice to recognize journalists under siege was proof that “a world without facts means a world without truth and without trust”.

Muratov dedicated his award to the six murdered journalists whose pictures hang in Novaya Gazeta’s Moscow office. “We will use this award to fight for Russian journalism, which they’re now trying to repress,” he told Podyom, a Russian news website.

Human rights lawyer Amal Clooney, a member of Ressa’s legal team, said, “I am so proud of my client and friend. She has sacrificed her own freedom for the rights of journalists all over the world. I hope the Philippine authorities will now stop persecuting her and other journalists, and that this prize helps to protect the press around the world.”

I'm so thrilled that journalist @MariaRessa has been awarded the Nobel Peace Prize.

If you’re new to her work, listen to our conversation from February about how she’s taken on the Duterte regime and disinformation on Facebook—armed only with the truth. https://t.co/b2GIAPSqp6

Vincent of RSF hopes that winning the Nobel Peace Prize will afford the two journalists some level of protection. “The international community is very much watching what’s happening, and know there would be consequences if anything happened to these journalists.”