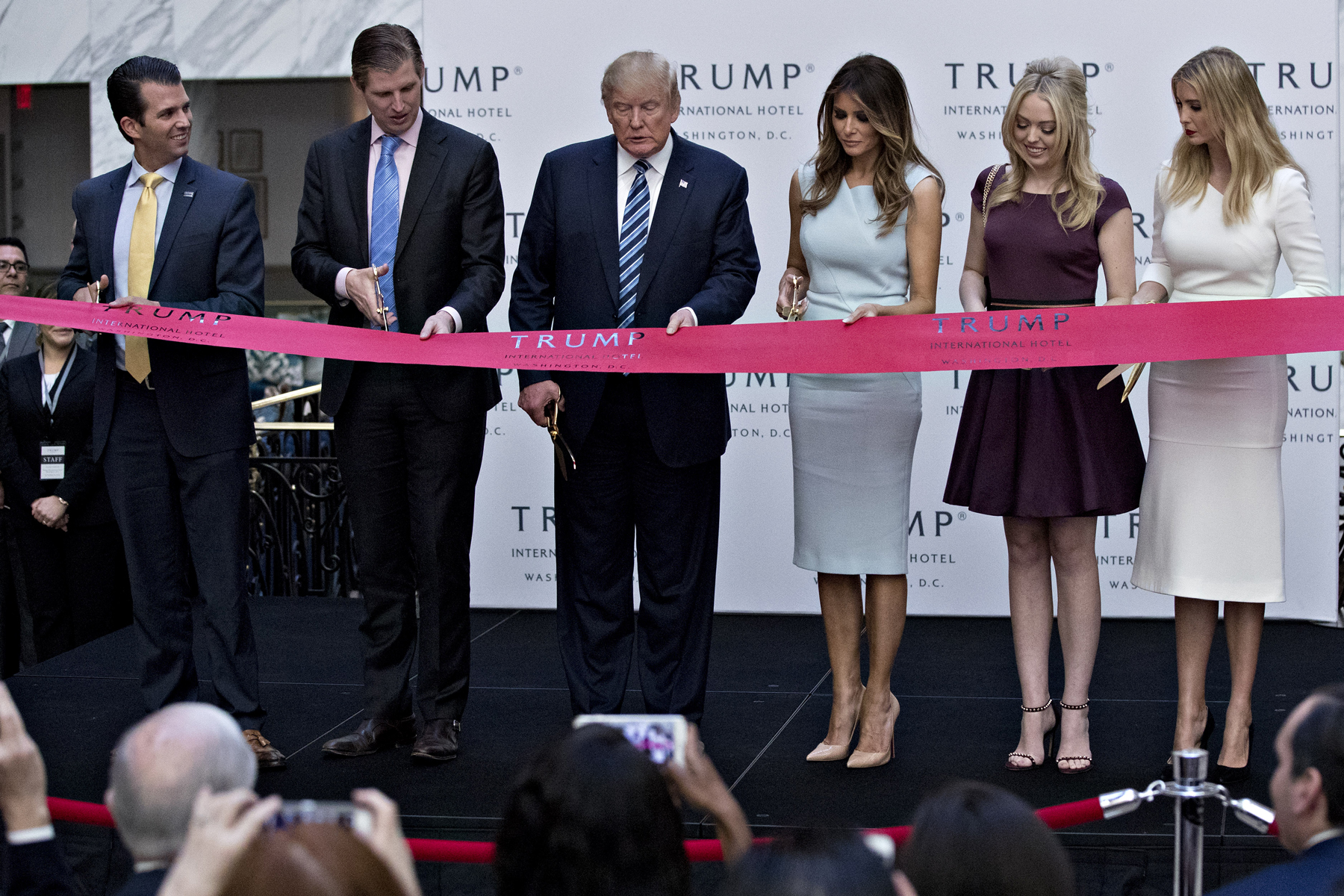 WASHINGTON — On the day he took office, Donald Trump was the most ethically challenged and financially conflicted president in modern history. He refused to divest from his private business holdings, which meant that foreign dignitaries, corporate CEOs, and others who spent money at Trump’s hotels and resorts were, in effect, putting money in his pocket and allowing Trump to leverage his public office into private profits. The maze of LLCs and holding companies under Trump’s control made it close to impossible to know the truth about the vast financial dealings of the commander-in-chief.

Explosive new findings released by Congress confirm the fears of legal experts who warned that Trump’s business dealings were an ethical minefield for a sitting president. Those findings focus on the crown jewel of Trump’s real-estate empire — his Washington, D.C., luxury hotel.

A 27-page letter published by two top Democrats on the House oversight committee says that Trump misled the public about the finances of his D.C. hotel, disclosing the hotel’s revenues without revealing that it had in fact incurred net losses of over $70 million. The congressional report also says that Trump renegotiated a $170-million loan with Deutsche Bank to delay his payments by six years — a favorable deal he also didn’t fully disclose to the public.

The new congressional report draws on hundreds of pages of new documents obtained from the government agency that oversaw the lease of the Trump D.C. hotel. Those documents reveal that foreign governments spent $3.7 million at Trump’s D.C. hotel between 2017 and 2020 — a sum, according to the oversight committee, that would be enough to pay for nearly 7,500 nights at the hotel based on publicly available room rates. These foreign payments raise questions about whether Trump repeatedly violated a key anti-corruption provision in the Constitution.

“This new evidence raises many questions that require further investigation and action by the Committee,” Reps. Carolyn Maloney (D-N.Y.) and Gerry Connolly (D-Va.) write in the letter.

Spokespeople for Trump and for the Trump Organization didn’t immediately respond to requests for comment on the oversight committee’s findings.

The Trump International Hotel Washington opened its doors in September 2016, a few months before candidate Trump won that year’s presidential election. The hotel soon turned into a glittering clubhouse for aides and advisers to the new president: Walk in on a weekday evening and you might see Donald Trump Jr. and former campaign chief Brad Parscale lounging by the bar, Treasury Secretary Steven Mnuchin hustling through the lobby, or Rudy Giuliani holding court at BLT Prime, where Trump had his own table.

The Trump hotel in D.C. was also a magnet for domestic and foreign interests looking to curry favor with the Trump administration. The CEO of T-Mobile, John Legere, would stride through the hotel in his signature hot-pink company T-shirt; according to a congressional investigation, Legere and other company officials spent $195,000 on hotel rooms and other expenses there since T-Mobile asked the administration to approve a massive $26-billion merger with Sprint. The hotel was also a hotspot for foreign governments, which rented ballrooms to host parties and in doing so put money into the president’s coffers.

There was no precedent for a sitting president owning a luxury hotel down the street from the White House, and Trump took few real steps to separate his financial interests from those of the hotel. The hotel, then, became the perfect vehicle for funneling money to Trump and winning his favor in the process. As one government-procurement told me in 2017, a foreign government hoping to win over Trump could reserve a ballroom at the hotel and not even bother with hosting the event. “It’s a win-win,” the expert, Steven Schooner, said. “If you use the space, you’re entertaining people on the president’s property, and if you don’t, you’ve basically just funneled the money to the president and the president’s family.”

Yet even with such an easy way to get money into Trump’s hands, the Trump Organization struggled to turn the D.C. hotel into a profit-making machine. Throughout his presidency, Trump stated in his yearly personal financial disclosures that the Trump D.C. hotel was earning quite a lot of money for him and his family — more than $156 million in income spanning 2017 to 2020. But according to the new congressional findings, the financial health of the hotel was quite dire.

According to the House oversight committee’s new report, Trump’s audited financial statements show that the property “sustained a net loss of $2.5 million to $22 million each year, for a total loss of more than $73 million from 2016 to 2020.” In other words, the hotel wasn’t raking in cash as it seemed from the outside; it was bleeding money. And according to the committee, this was true even before the Covid-19 pandemic crushed the hotel industry writ large. The Trump D.C. hotel’s financial condition was so precarious that a separate Trump legal entity loaned the hotel $27 million from 2017 to 2020. Most of that money ultimately wasn’t repaid, the committee found.

“Taken together, these documents show that far from being a successful investment, the Trump Hotel was a failing business saddled by debt that required bailouts from President Trump’s other businesses,” the oversight committee’s letter says. “In deciding to conceal the Trump Hotel’s true financial condition from federal ethics officials and the American public, President Trump hid conflicts of interest stemming not just from his ownership of the hotel but also from his roles as the hotel’s lender and the guarantor of its third-party loans.” 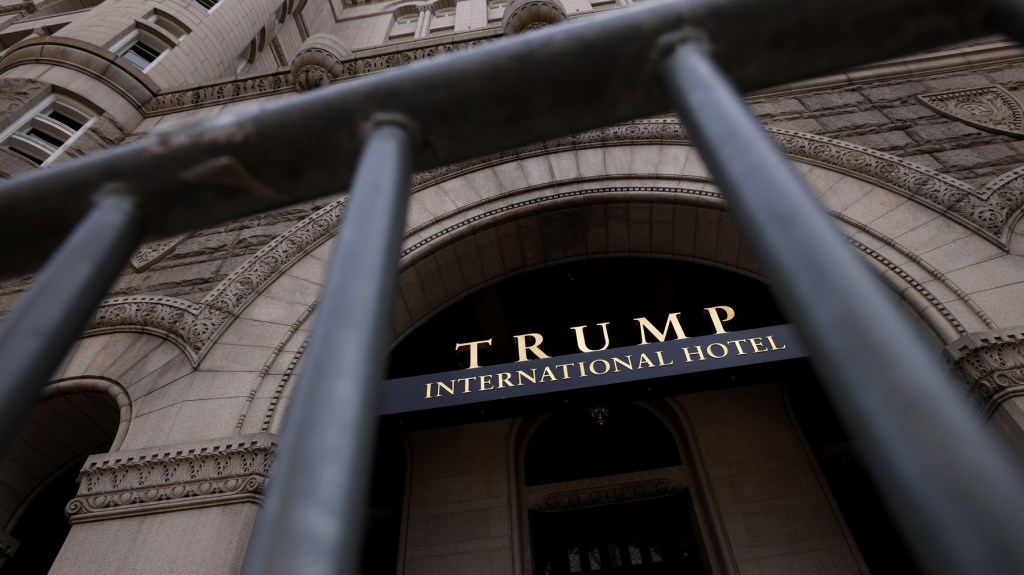 The Trump International Hotel is seen though security fencing on June 02, 2021 in Washington, DC.

The financial sketchiness uncovered by the oversight committee doesn’t stop there. According to the committee, one of Trump’s principal lenders, Deutsche Bank, agreed in 2018 to renegotiate a $170-million construction loan for the D.C. hotel. Under the new terms, Trump could defer principal payments on loan for six years. The deferral not only saved the hotel from having to spend millions of money on loan payments; it also took a great deal of pressure off of Trump himself, who had personally guaranteed the Deutsche loan, according to Congress.

There is one particular detail about Trump’s Deutsche loan that caught the oversight committee’s attention. According to the committee, the Trump hotel in D.C. drew $31 million from the Deutsche construction loan in August 2016 even though the hotel opened its doors just one month later. Congressional investigators said it was “not clear how this large sum of money was used during this period, or how it was accounted for on the hotel’s annual financial statements.” The oversight committee’s letter also says Trump didn’t publicly disclose the $31 million drawdown on this loan, and the documents obtained by the committee “do not fully account for how the funds were used.”

After years of raising the alarm about Trump’s many conflicts of interest, the oversight committee’s latest findings validate the concerns voiced by ethics and transparency advocates that Trump’s hotel could be used as a conduit for foreign money. While there has been ample reporting about foreign dignitaries spending money at the Trump D.C. hotel, the oversight committee’s findings offer potentially the fullest accounting of that foreign spending — more than $3.7 million from 2017 to 2019.

Using the average daily room rate for the hotel, that sum of money could purchase 7,433 nights. That translates to a stay of more than 20 years at Trump’s D.C. hotel.

Reps. Maloney and Connelly say in their report that they plan to continue investigating Trump’s D.C. hotel and how the General Services Administration handled the lease on that hotel. They’ve requested more documents related to Trump’s Deutsche Bank loan, foreign government spending, and the GSA’s lease with Trump, saying the additional information will help “address the unresolved ethics crisis left by former President Trump and prevent future presidents from profiting off the presidency.”