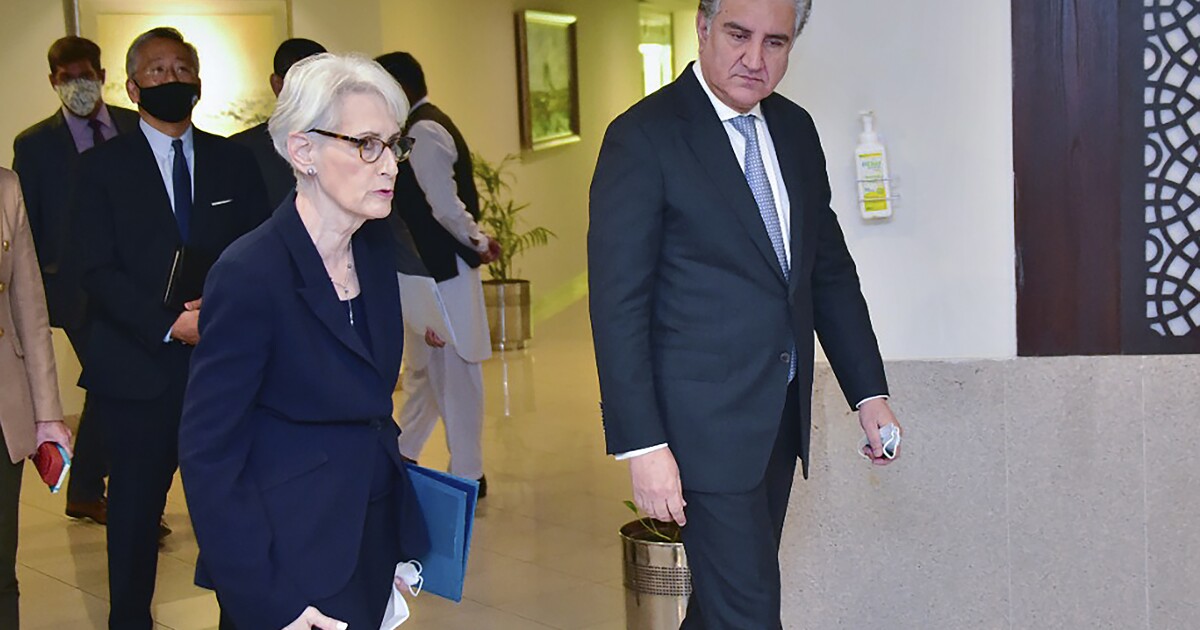 U.S. and Pakistani officials held difficult talks on Friday in Pakistan’s capital amid a worsening relationship between Washington and Islamabad as each searches for a way forward in a Taliban-ruled Afghanistan.

The meeting between Washington’s deputy secretary of State and Pakistan’s leaders came amid an array of unsettled issues. They include questions such as the level of future engagement with the Taliban in Afghanistan, and the ongoing evacuation of foreign nationals and Afghans who want to flee the country’s new Taliban rulers.

Another question on the agenda is who will provide funds to stave off a full economic meltdown and looming humanitarian crisis in Afghanistan. Since the Taliban takeover, billions of dollars in aid have been frozen. Nearly 80% of the former Afghan government’s budget was funded by international donors.

Even as it shies away from any unilateral formal recognition, Pakistan has been pressing for greater engagement with the all-male, all-Taliban Cabinet that the insurgents set up after they overran Afghanistan in mid-August, in the final weeks of the U.S. and NATO pullout from the country.

Pakistan has also urged Washington to release billions of dollars to the Taliban so that they can pay salaries of the many Afghan ministries and avoid an economic meltdown. The United Nations High Commissioner for Refugees has warned that such a crash could unleash a mass migration.

Washington, which spent almost two full years negotiating peace with the Taliban, is still smarting from its dramatic exit from Afghanistan after 20 years of war. Images of desperate Afghan men running alongside a departing American C-17, some falling to their death from the wheel well, have come to represent the mayhem of the U.S. withdrawal.

Still, the United States is quietly talking to some Taliban leaders and current Taliban Cabinet ministers to secure the evacuation of American nationals remaining in Afghanistan and others. At home, Republican senators are pressing for legislation that would sanction Afghanistan’s new rulers.

The legislation introduced late last month by 22 Republican senators also calls for sanctions on Pakistan for providing haven for the Taliban. That has raised hackles among Pakistan’s leaders, who have slammed Washington for what they say is unjust blaming of Pakistan for America’s losses in Afghanistan — especially after seeking and receiving Islamabad’s help in the protracted peace talks with the Taliban.

Pakistan has also opened doors to tens of thousands of evacuees from Afghanistan, providing temporary shelter for both foreigners and Afghans fleeing Taliban rule.

Little information has emerged from the meetings. A statement from Pakistan’s foreign ministry said “an inclusive and broad-based political structure reflecting the ethnic diversity of Afghan society was essential for Afghanistan’s stability and progress.”

That was a clear message to the Taliban: An acceptable Afghan government is one that includes representatives of all Afghan minorities.

The statement also had a message for the world, saying “the current situation required positive engagement of the international community, urgent provision of humanitarian assistance, release of Afghan financial resources, and measures to help build a sustainable economy to alleviate the sufferings of the Afghan people.”

The international community has repeatedly expressed concern over Taliban restrictions on access to education for girls and women, both at the high school and university level. It has warned against a return to the the harsh Taliban rule from the 1990s, when they first controlled Afghanistan and banned women from school, the workplace and public life.

Meanwhile, Afghanistan also featured prominently at a national security meeting Friday attended by Pakistan’s military leaders and Prime Minister Imran Khan. A statement warned that instability in Afghanistan would have “severe implications for Pakistan.” Khan ordered that a “special cell” be set up to coordinate humanitarian aid to Afghanistan and manage Pakistan’s border with its neighbor.

Sherman, who arrived Thursday for a two-day visit, also met with Pakistan’s Security Advisor Moeed Yusuf late on Thursday, to discuss “developments in Afghanistan and ways to advance cooperation across the bilateral relationship. ”

Pakistan walks a fine line as it seeks to establish a relationship with the U.S. in a changing region, where both Russia and China have increasing influence.

A strident opponent of the U.S.-led “war on terror,” Khan has assured Pakistanis that Washington would have no access to Pakistan’s territory for so-called over-the-horizon attacks on Afghanistan.

The Pentagon has warned that Afghanistan could be a threat in one to two years, mainly from the Islamic State group, which is a rival and enemy of the Taliban. Islamic State has ramped up attacks on the Taliban recently, including a bombing Sunday at a Kabul mosque where Taliban spokesman Zabihullah Mujahid attended a memorial service for his mother. Five civilians were killed in that attack.

On Friday, a massive explosion that targeted minority Shiite Muslims in the northern Afghan city of Kunduz left at least 46 dead, according to Taliban officials. Islamic State claimed responsibility.

But Pakistan faces fierce opposition among its 220-million-strong population to any accommodation to Washington for attacks on Afghanistan.

A Gallup Pakistan Poll released late Thursday showed that 55% of Pakistanis surveyed favored an Islamic government like the one operated by the Taliban in Afghanistan. The survey was conducted between Aug. 13 and Sept. 5 and polled 2,170 men and women in cities and in rural areas of Pakistan. It gave a margin of error between 2% and 3%.