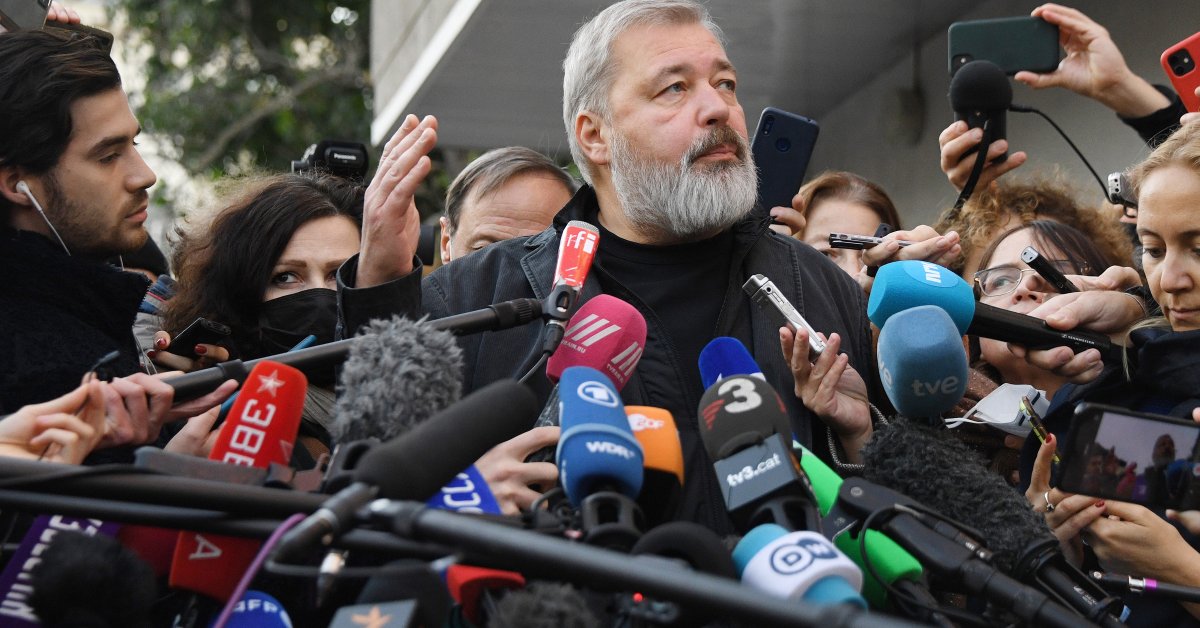 Russian journalist Dmitry Muratov was named alongside Maria Ressa as a Nobel Peace Prize winner on Friday in recognition of his efforts to defend freedom of expression.

Muratov has less of an international profile than Filipino journalist Ressa, who was one of the “Guardians” of the free press TIME named as Person of the Year in 2018, but journalists and critics of the Russian government have widely welcomed his selection.

Who is Dmitry Muratov?

Muratov is the founder and editor-in-chief of Novaya Gazeta, one of Russia’s last big newspapers to regularly criticize President Vladimir Putin, and which has reported extensively on government corruption in the country.
[time-brightcove not-tgx=”true”]

“The newspaper’s fact-based journalism and professional integrity have made it an important source of information on censurable aspects of Russian society rarely mentioned by other media,” the Nobel Committee said in a statement announcing the award Friday.

Muratov and his team were recognized for the personal risk they have taken to push back against Putin’s attacks on press freedom in Russia. Six of Novaya Gazeta’s journalists have been killed in the line of duty, according to the Committee to Protect Journalists. One, Anna Politkovskaya, was assassinated 15 years ago to the day on Thursday. Russia is ranked 150th out of 180 countries in Reporters Without Borders’ 2021 World Press Freedom Index.

“Despite the killings and threats, editor-in-chief Muratov has refused to abandon the newspaper’s independent policy,” the Nobel committee said. “He has consistently defended the right of journalists to write anything they want about whatever they want, as long as they comply with the professional and ethical standards of journalism.” Muratov dedicated his win to the murdered journalists on Friday.

How have Russian journalists reacted?

While Muratov’s recognition was widely welcomed, some warned that it would not be enough to protect journalists.

Ilya Azar, a special correspondent for Novaya Gazeta, told TIME he was proud of Muratov, his boss, for receiving the award. The newspaper “is making a great contribution in the fight for freedom of speech and human rights in Russia,” he said.

“But if somebody sees this Nobel prize to Muratov as a strong signal to Putin from the West to stop prosecutions in Russia, then they are wrong,” Azar added. “If that was the idea, then the Nobel Committee should have given the prize to Alexei Navalny, which is what many activists in Russia thought would be a powerful move.”

Navalny is Russia’s most prominent opposition leader and was the victim of an assassination attempt linked to the Kremlin in 2020. In February, he was sentenced to a lengthy jail term for supposedly violating his probation, in a move seen by most international observers as an act of state intimidation. He was one of the oddsmakers’ favorites to win the prestigious accolade.

Alexandrina Elagina, a Russian journalist who was attacked in 2016 by a group of masked men while reporting in the Caucasus area of Russia, echoed the sentiment. “It is a very difficult time to be an editor-in-chief [in Russia] today,” said Elagina, who is managing editor of the Russian-language news website Polit.ru. “Muratov deserves respect.”

“But many people in Russia believe Alexei Navalny deserves to have won,” she added.

At a news conference on Friday, Muratov even said that he would have voted for Navalny to win the prize, had he been on the committee that decides the award.

Read more: Alexey Navalny Is Succeeding Where Putin’s Other Opponents Have Failed. Why?

A Kremlin spokesperson congratulated Muratov for his win on Friday, calling him “brave,” in a comment denounced by some social media users as cynical given the government’s responsibility for the difficult climate for journalists.

Muratov said at the news conference he had asked Kremlin officials whether he would be declared a foreign agent now that he had won the prize—a reference to the Kremlin labelling 47 media outlets and about 10 journalists as foreign agents in a move criticized by press freedom observers worldwide.

Azar said while Muratov’s recognition by the Nobel Committee was well-deserved, it reminded him of the phrase “we are deeply concerned,” which he said is often used by Western politicians who frequently condemn the Kremlin but take no real action. “We often laugh about this phrase in Russia,” Azar said.