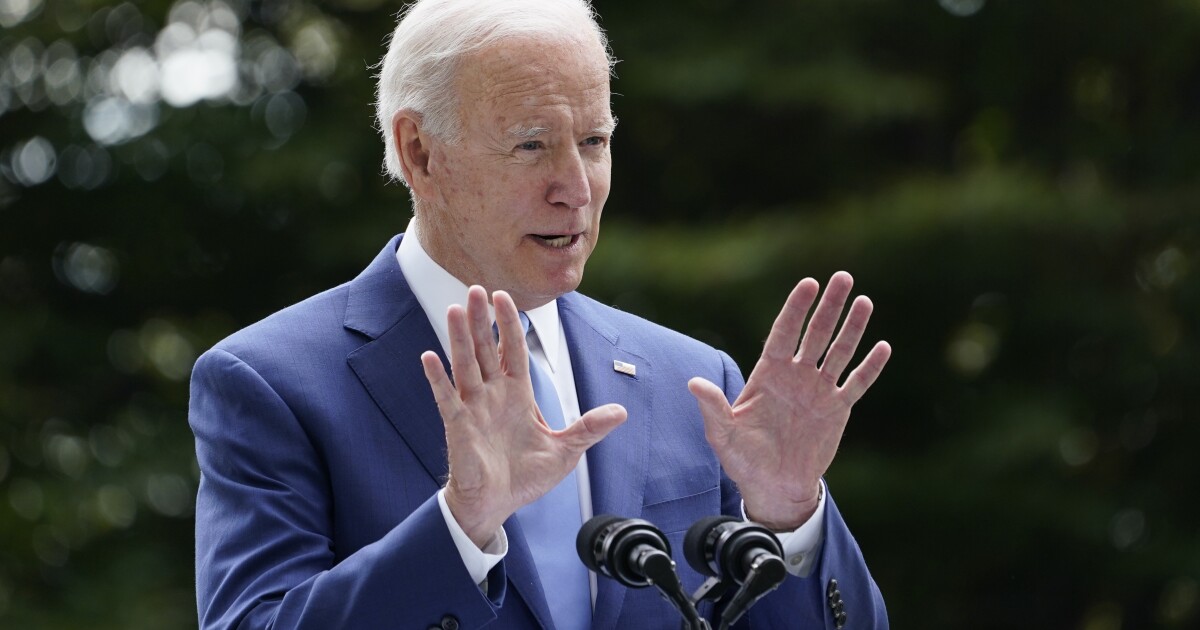 President Biden on Friday restored two sprawling national monuments in Utah, reversing a decision by President Trump that opened for mining and other development hundreds of thousands of acres of rugged lands sacred to Native Americans and home to ancient cliff dwellings and petroglyphs.

The Bears Ears and Grand Staircase-Escalante monuments in southern Utah encompass more than 3.2 million acres — an area nearly the size of Connecticut — and were created by Democratic administrations under a century-old law that allows presidents to protect sites considered historic, geographically or culturally important.

“This may be the easiest thing I’ve ever done so far as president — I mean it,” a smiling Biden said at a White House ceremony attended by Democratic lawmakers, tribal leaders and environmentalists.

Restoring the monuments’ boundaries and protections restores their integrity, upholds efforts to honor the federal trust responsibility to tribal nations and conserves the lands and waters for future generations, Biden said.

Bears Ears in particular was an important site to protect, Biden said, noting that the 1.3-million acre site is the first national monument to be established at the request of federally recognized tribes. It is “a place of healing … a place of reverence and a sacred homeland to hundreds of generations of native peoples,” Biden said.

Biden called Grand Staircase-Escalante “a place of unique and extraordinary geology” and noted that the 1.9-million acre site had been protected by presidential order for 21 years before Trump’s 2017 order slashed the monument’s size by nearly half. Trump cut Bears Ears by 85%, to just over 200,000 acres.

In a separate action, Biden also restored protections at a marine conservation area off the New England coast that has been used for commercial fishing under an order by Trump. A rules change approved by Trump allowed commercial fishing at the Northeast Canyons and Seamounts National Monument in the Atlantic Ocean, a nearly 5,000-square-mile area southeast of Cape Cod. Trump’s action was heralded by fishing industry groups but derided by environmentalists who pushed Biden and Interior Secretary Deb Haaland to restore protections against fishing.

“There’s nothing like it in the world,” Biden said of the marine monument, citing its “unique biodiversity” and “waters teeming with life, with underwater canyons as deep as parts of the Grand Canyon [and] underwater mountains as tall as the Appalachians. Marine scientists believe that this is a key to understanding life under the sea.”

Utah Gov. Spencer Cox and other Republicans expressed disappointment in Biden’s decision to restore the Utah monuments, where red rocks reveal petroglyphs and cliff dwellings and distinctive buttes bulge from a grassy valley. Trump invoked the century-old Antiquities Act to cut 2 million acres from the two monuments. Restrictions on mining and other energy production were a “massive land grab” that “should never have happened,” Trump said in revoking the protections.

Sen. Mitt Romney (R-Utah) said Biden had “squandered the opportunity to build consensus” and find a permanent solution for the monuments. “Yet again, Utah’s national monuments are being used as a political football between administrations,” Romney said.

Haaland, the first Native American to serve as a Cabinet secretary, said Biden’s actions were not just about national monuments.

“It’s about this administration centering the voices of Indigenous people and affirming the shared stewardship of this landscape with tribal nations,” she said at the White House. “The president’s action today writes a new chapter that embraces Indigenous knowledge, ensures tribal leadership has a seat at the table, and demonstrates that by working together we can build a brighter future for all of us.”

Rep. Raul M. Grijalva (D-Ariz.), chairman of the House Natural Resources Committee, said in a statement that Biden’s restoration of the monuments shows his dedication to “conserving our public lands and respecting the voices of Indigenous Peoples.”

Jennifer Rokala, executive director of the Center for Western Priorities, a conservation group, said she hopes Biden’s actions mark an initial step toward his goal of conserving at least 30% of U.S. lands and ocean by 2030.

Trump’s cuts attracted widespread news coverage and increased national attention to Bears Ears, Rokala and others noted. They called on the federal government to boost funding to manage the landscape and handle growing crowds at the two sites.

“In some ways the hard work is ahead of us now, as we turn our attention to planning, co-management and public education,” said Joe Neuhof, executive director of Friends of Cedar Mesa, a Utah conservation group.

Haaland, who visited Bears Ears in April, said Indian tribes have long “sung and spoken in unison to protect” Bears Ears, which she called a “sacred place” and “a living landscape.”

Bears Ears “is a place where you can stand in the doorway of a home where a family who lived thousands of years ago left behind a legacy of love and conservation for a place that sustained them for countless generations,” she said. “Stories of existence, celebration, survival and reverence are etched into the sandstone canyon walls. Sacred sites are dotted across the desert mesas.”

President Obama proclaimed Bears Ears a national monument in 2016, 20 years after President Clinton moved to protect Grand Staircase-Escalante. Bears Ears was the first site to receive the designation at the specific request of tribes.

“For us, the monument never went away,” said Shaun Chapoose, a coalition member and chairman of the Ute Indian Tribe Business Committee. “We will always return to these lands to manage and care for our sacred sites, waters and medicines.”

The Trump administration’s reductions to Bears Ears and Grand Staircase-Escalante paved the way for potential coal mining and oil and gas drilling on lands that were previously off-limits. However, activity was limited because of market forces.

“Anyone who likes fresh local swordfish, tuna, lobster and crabmeat should be very angry with the Harris-Biden Administration today,” Vanasse said in a statement.