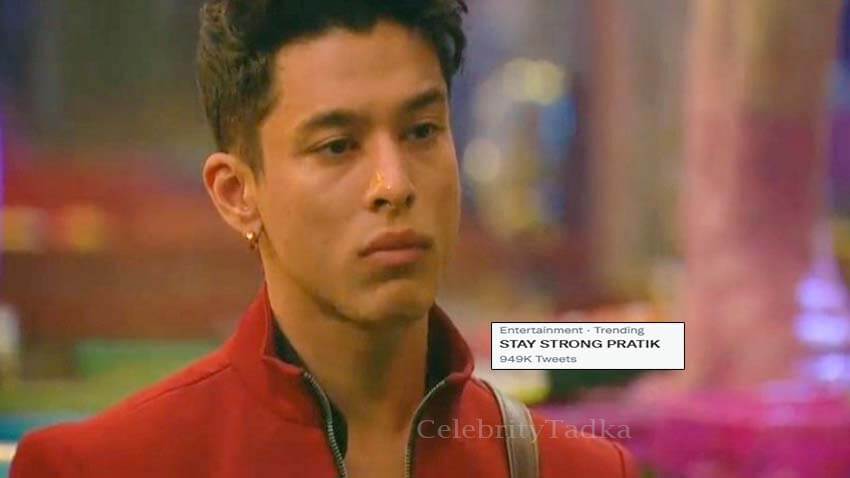 Bigg Boss 15 first weekend ka vaar hosted by Salman Khan is finally aired on television. The show has managed to grab lot of attention in the first week itself, from fights and drama to entertainment. There is one man who has emerged as the villain of the house in first week, it is Pratik Sehajpal. Pratik, who’s very opinionated and stubborn, has had huge fights with Karan Kundrra, Jay Bhanushali and Vishal Kotian in the house.

Yesterday, things got rather ugly when Pratik broke the bathroom lock while Vidhi Pandya was taking shower. Though he apologized to Vidhi, but housemates felt it was rather insincere. On Weekend Ka Vaar episode, host Salman Khan reprimanded Pratik Sehajpal for his behaviour. Salman even said that he is looking like a fool in front of the world. At the end of the episode, Pratik got emotional in the jungle area and Nishant tried to console him.

Pratik gained immense fan following with his stint in Bigg Boss OTT. Today since afternoon, his fans are trending “STAY STRONG PRATIK” on Twitter showing their support to him. His fans has crossed 950K tweets and will soon hit 1 Million tweets on Twitter.

Have a look at fans reactions:

Having a friend Who supports you without any judgement is real blessing.
This pic of #PratikSehajpal is just 💔
Glad that #NishantBhat is there with him and consoling him.
Stay Strong Pratik
Be Calm and Play the Game.💪#BB15 #BiggBoss15 #WeekendKaVaar pic.twitter.com/N6fPenaVEK

He had so many hopes before going to that show.
From first day he tried to give his best.

Today they finally broke him.

You know they say whatever happens happens for good maybe whatever happened happened for your good take it easy and just
STAY STRONG PRATIK
Learn from it Grow from it #PratikSehajpal pic.twitter.com/uquSJ2VqQc

And it’s 900k with 7th!!!
Fam I am so so so so proud that you all didn’t get influenced and stayed strong and intact!!
You amazing and he amazing!!