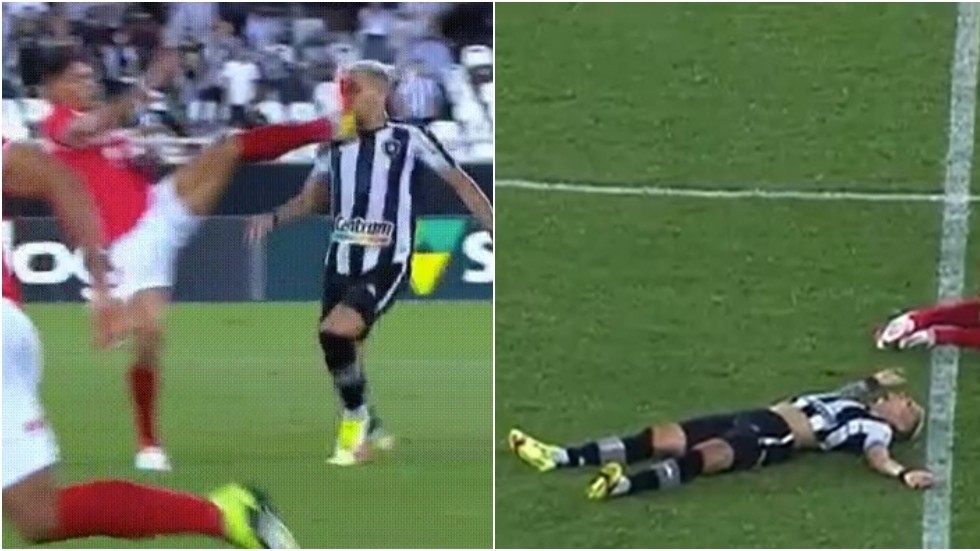 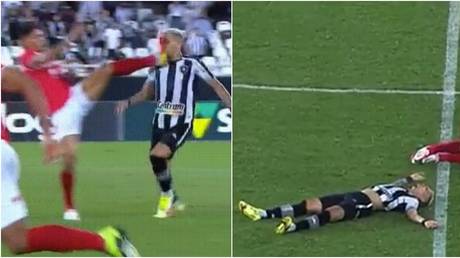 An incident in a Brazilian Serie B game on Friday night caused shock after a defender received a straight red card for a full-frontal karate kick on a member of the opposition that left the player writhing on the floor.

The developments unfolded in a second-tier fixture between Botafogo and CRB played at the former’s Estadio Olimpico Nilton Santos.

In the 31st minute, Rafael Navarro of the home team looked as though he might break through towards goal from his own half when intercepting a poorly-headed backward pass.

But João Caetano had other ideas.

Hardly even making an effort to meet the bouncing ball, he instead raised his leg and fired off the sort of face kick that seemed better suited to the UFC.

With Navarro rolling on the floor, a group of players rushed to gather round Caetano, who was also on the ground somehow attempting to win a foul.

Even Botafogo keeper Douglas Borges made the run from his own goal to around the halfway line to check on his teammate, who nearly had his head taken clean off.

And unsurprisingly, Caetano was sent for an early bath with a straight red card that ended his involvement in the fixture.

Though not everyone might have been tuning in to the game in the early hours of the morning for most foreign audiences, a clip of the kick soon went viral on the internet.

Caetano’s lunge was jokingly described as a “slightly mistimed tackle”, as it was balked that “the game’s gone soft” by him receiving his marching orders.

Would have been a yellow for the Botafogo player for simulation if in the Premier league!

“Would have been a yellow for the Botafogo player for simulation if [it was] in the Premier League!,” was another wisecrack.

“It’s not a high boot, he just has a low head!” said another onlooker, suggesting a possible excuse that could have been used by the offending party.

“May as well be a non-contact sport nowadays. It’s a good, honest challenge,” concluded a separate joker.

Navarro thankfully lived to tell the tale, and played the rest of the game until being brought off in the 83rd minute.

Sealing a 2-0 win, fallen Rio giants Botafogo remained in second in the Serie B table, three points behind leaders Coritiba, and are well in line for a return to the Brazilian top flight.