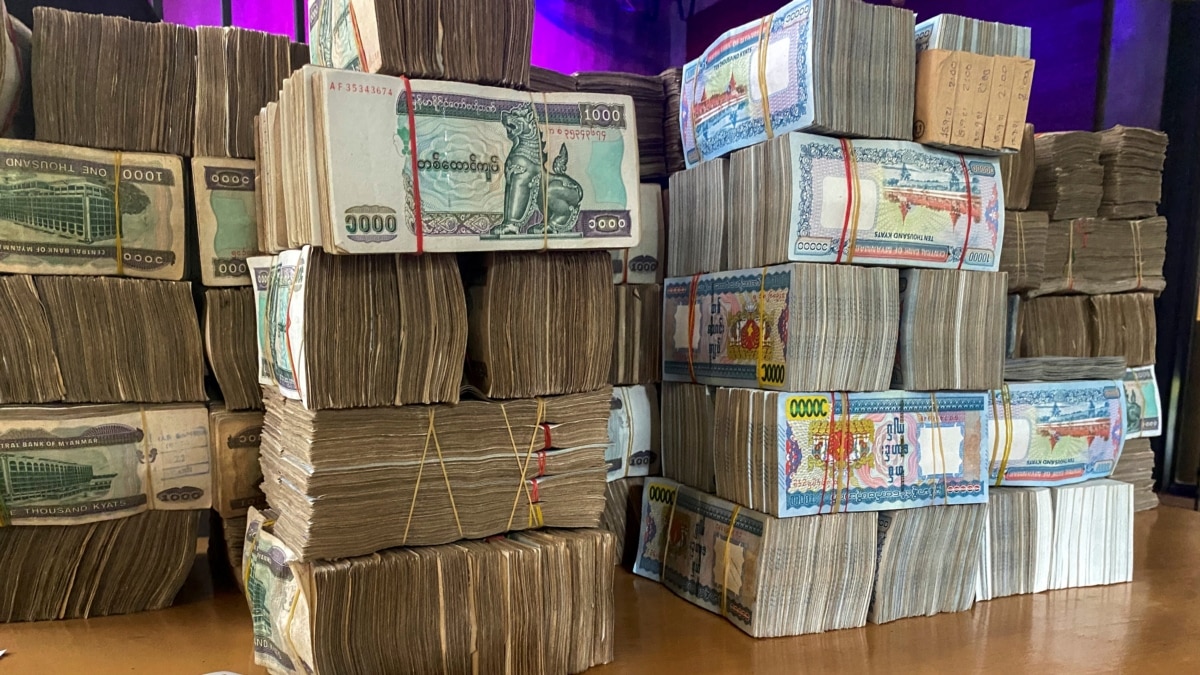 An unprecedented plunge in the value of Myanmar’s currency, the kyat, has driven up the prices of key imported commodities, placing basic commodities ranging from auto fuel to cooking oil beyond the reach of many ordinary citizens.

The dollar exchange rate showed particular volatility during the last week of September, when surging demand for the American currency pushed the rate to a record high of about 2,700 kyats to the dollar – almost double the rate before the Feb. 1 coup.

Since then, the prices of fuel and imported commodities, especially cooking oil, have risen by nearly 50%, prompting laments from local businessmen who spoke to VOA, including rice exporters and merchants, importers of cooking oil and grocery dealers.

Yangon taxi drivers have been particularly hard hit. Many have stopped driving because they cannot afford fuel and some tell VOA they will quit the business entirely if the price does not drop.

“It is the worst situation I have ever had in 40 years of driving a taxi,” said Al Doe, a 53-year-old taxi driver in Yangon’s North Dagon township. Before September, Al Doe earned 30,000 kyats per day and spent 6,000 kyats of that for fuel.

Before the coup, the price of a liter of gasoline or diesel fuel was around 700 kyats. Now, it has soared to over 1,500 kyats. But drivers said they cannot ask for more money from passengers, which leaves them unable to pay the cost of fuel and owner fees.

“Driving around in Yangon is also dangerous because of frequent bomb blasts. No one wants to work at risk without getting enough income,” said Min Wathan, a former journalist who turned to driving a taxi when he lost job after the coup.

Food distributors say the rise in the dollar exchange rate has boosted the cost of food imports by 20% to 50%. In particular, the price of cooking oil – sold by a Myanmar unit of measurement called the viss that is equal to about 1.6 kilograms – almost tripled within a few days.

“The cooking oil price was around 2,000 kyats per viss at 1,150 kyats per U.S. dollar. Now it has reached around 6,000 kyats. This is the first time in history of cooking oil sales that we have ever heard of such a high rise,” said Than Than Myint, a retailer and wholesaler in Pyawbwe township of Mandalay region.

Than Htay, a 52-year-old housewife in a township of Myanmar’s capital, told VOA there are five family members in her household. “My husband and eldest son are civil servants. The other three are unemployed. I don’t know how to manage to cover our expenses with a very low monthly income of 400,000 kyats as food and goods are doubling.”

“It is not easy to borrow money from others in this difficult time,” she added.

Nwe Yee Win, a 37-year-old labor activist, is a garment worker who lost her job because of the closure of her factory after the coup.

“Since I became jobless, I am very careful about spending money. I was shocked when I went to market yesterday [Oct. 3]. Everything is very expensive. It was 1,200 kyats for one viss of potatoes in September. Now it costs 2,000 kyats for one viss,” she said.

“I depend on my husband’s daily wages. His job has recently ended. We don’t have enough money even to pay for the house rent. We have already been seriously affected by pandemic and the coup. I have no idea how to avoid hunger under such terrible situation,” Nwe Yee Win said.

The kyat’s devaluation has distressed not only the urban population, but also farmers in rural areas, who represent 70% of the country’s population. Rising fertilizer prices are directly affecting farmers. The price of a bag of Pearl brand fertilizer rose from 65,000 kyats to 79,000 kyats in just a week.

“The rental price for harvesting machines will double because of the current gasoline price. We are disappointed with current situation,” said Kyi Myint, a farmer who grows rice and sesame on his 8 hectares of land in Magway’s Myaing township.

Despite spending more money for materials, equipment and harvesting, farmers are not guaranteed a good price for their crops, Kyi Myint added.

Junta spokesperson General Zaw Min Tun told a Sept. 30 press conference that “all efforts are being made to find the best solution” to the surging prices.

“We have a responsibility to deal with the rising dollar and gold prices in our time. We will try to deal with it the best way although it may not be perfect,” he said.

On Oct. 3, the junta’s central bank issued a directive that exporters will be allowed to keep export earnings in their foreign currency accounts for only 30 days.

“The move was only a short-term solution to the country’s foreign exchange problems,” a local businessman in Yangon who did not want to be named told VOA.