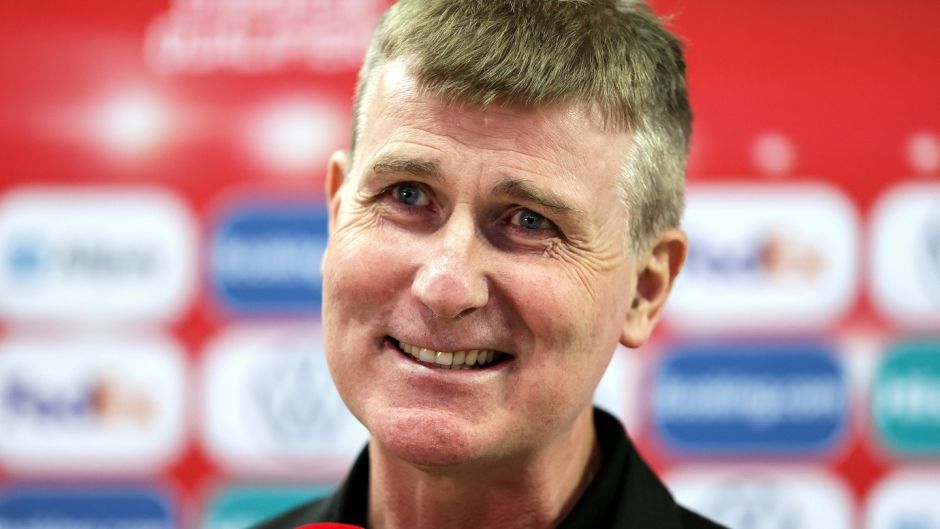 “The win was long overdue,” said Stephen Kenny, with the understatement of the century. “To have all our better players available more regularly is important to us.

“We have undergone a system change from March onwards and I think it suits the systems we have. The players are learning and improving all the time. Our attacking play, I mean.”

Jokes aside, and there are many, many puns about Callum Robinson’s pair of brilliant strikes, Kenny could speak about the Republic of Ireland’s first victory in his 17 matches at the helm, and first since the mighty Gibraltar were felled at the Aviva stadium in June 2019.

The narrative could hone in on the goal scorers, Robinson and Chiedozie Ogbene, being on the pitch together, and finally delivering for their country and their under fire manager.

“Yeah, that one is going to hurt for a while that I didn’t get a hat-trick in the end,” Robinson, the undisputed man of the match, told RTÉ, after two excellent finishes were ever so slightly sullied by a catalogue of near misses. “They were good saves from the ‘keeper. The main thing is that we’re on the plane on the way home with a big W.”

The chartered flight will have them waking up in Castleknock hotel on Sunday morning and with the FAI now certain to flog a few extra thousand tickets for Qatar’s visit to the Aviva on Tuesday.

Robinson was tempted to steal Ogbene’s late header, for Ireland’s third, but the West Brom striker sensibly hesitated as he may have been offside while denying his friend a first international goal.

“I thought I’d rob it off him to get my hat-trick! No, I’m really happy for him. He’s got so much energy, a good player in one v ones, he deserved that tonight and congratulations to him.”

That is the story of the night – real life, visible goal scorers and a dominant victory that matches last month’s performances against Portugal and Serbia.

“It’s a great result for us, for the manager and the nation,” said Ogbene, not missing out on a single soul. “As Stephen said, it’s an overdue result. All of us have made a lot of sacrifices, we have taken a lot of criticism and I feel like we deserve to be happy tonight. We need to maximise the occasion and enjoy it.

“When I scored my first goal it was overwhelming,” Ogbene continued of a header that will resonate with an entire generation of Irish kids following in the path of the Lagos born, Cork raised 24 year-old. “I made a lot of sacrifices. There is my family, my friends, but I owe it to the gaffer for believing in me.

“Anyone could have come on but for him to believe in me and bring me on it is a special night for me, my family and for the team.”

After all the chaos that has gone before, here is a night that Kenny can cherish or maybe just a night when he can relax. Another type of personality would be smug but the Dubliner is his usual self.

“It’s not often that Ireland come away from home in a qualifier and win 3-0, so it was brilliant to do that and the players deserve a lot of credit,” he said. “Overall, I thought the importance of a clean sheet, because we haven’t kept a clean sheet in the qualifiers, it was very important that we did that.”

Shane Duffy and Gavin Bazunu deserve the lion’s share of credit for that statistic.

“That’s the only defeat in the last seven games, bar the 97th minute defeat in Portugal,” Kenny reminded everyone. “We can see the improvement in the team. Listen, we should have won more games that we’ve drawn and it was important to win tonight.

“The spirit among the players, they were brilliant, a tremendous effort and they deserve huge credit.”