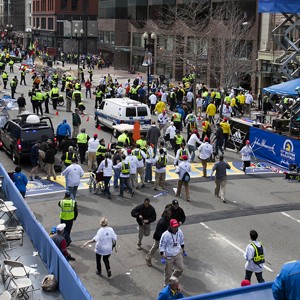 Monday’s running of the 125th Boston Marathon has posed that question to many athletes and spectators alike, who are accustomed to cheering on thousands along the 26.2-mile course on Patriot’s Day, a Massachusetts state holiday in April. More than 900 days have passed since the last in-person Boston Marathon was held, due to the global pandemic.

Monday’s field of 20,000 in-person runners will be intentionally smaller than the usual turnout but many international entrants have had to bow out due to travel restrictions triggered by the coronavirus.

Adidas, which extended its official sponsorship of the Boston Marathon last spring, is in its 32nd year as the official footwear and apparel supplier of the race. But other brands like Under Armour and New Balance are working overtime to reel in shoppers to their respective Copley Square area stores. Under Armour has hung a gigantic “Welcome Runners” banner at the entrance of its Prudential Center store and the entranceway is loaded up with marathon-inspired T-shirts and apparel. New Balance has also gotten in on the running-themed branding.

While hundreds of marathoners and their supporters toggled between picking up their bib numbers at the marathon expo at the John B. Hynes Convention Center and selfie-taking near the Boylston Street finish line, many stopped to shop at area retailers. Dozens lingered outside of Marathon Sports, where racks of clothing were placed on the sidewalk and the store’s doors were wide open. A few feet away is a memorial to the victims of the 2013 Boston Marathon bombing that killed three people and injured 260.

In an open-air Q&A Saturday afternoon, Meb Keflezighi spoke of the city’s resilience and how the “Boston Strong” mindset lives on. He recalled how after the bombing, he had vowed on the night of the 2013 Boston Marathon to compete in the 2014 event and he was focused on that goal for 365 days. On the morning of the 2014 race, he said he wanted to write the victims’ names on his shirt but knew that the “sponsors would be pissed.”
But in the end, Keflezighi inked their names on his shirt with a Sharpie pen, and was grateful that he had.

“It went viral.”
He also won the men’s race, making him the first American man to do so in 31 years.

The elite runner described the Boston Marathon as being like “the Olympics for everyday runners.” He and four other Boston Marathon champions will serve as grand marshals with eight frontline workers cruising along the course in two Boston Duck Boats.

A $110 lightweight zip-front royal blue and yellow Adidas “celebration” commemorative jacket with the Boston Athletic Association’s logo was by far the bestseller at Saturday’s “Fan Fest,” the first pre-race celebration in the event’s history, according to a salesperson. Testimony to that, scores of passersby were sporting the jackets. Pre-COVID, the marathon injected $200 million into the Greater Boston economy. But the item of choice for marathoners  this year is the bracelet that indicated vaccination and verification or a negative COVID-19 test.

In order to be able toe up to the starting line in Hopkinton, Mass., Monday morning, participants need to show verification for a World Health Organization-certified vaccine or take an on-site COVID-19 tests this weekend with white tent outposts set up for both right near the finish line.

B.A.A. officials stood guard near a series of glass cases showcasing such marathon memorabilia as the black bathing suit and nearly knee-length shorts that Bobbi Gibb wore after sneaking in to run the then all-male race in 1966. The all-cotton “Bowdoin” T-shirt that the 1983 women’s champion Joan Benoit Samuelson wore to represent her alma mater was also on view, as was gear worn by Katherine Switzer, the first female to officially run the race in 1967 (despite the race manager’s attempt to take her bib number and end her bid.)

While some may have been inspired by the Boston Marathon trophy that was on display Saturday for a limited time, or by a Lego version nearby, Keflezighi offered some words of caution about Monday’s 26.2-mile trek, encouraging participants not to go out too fast, explaining that the first half’s narrow streets and the cheering crowds can lead to a trying second half – speaking from personal experience. He also spoke of meeting a race participant at the 2013 expo, who informed him that it had taken her 22 years to qualify for the Boston Marathon. Sensing the practice-patience analogy fell a little flat, Keflezighi reminded them that running and marathoning can be painful, but rewarding too.