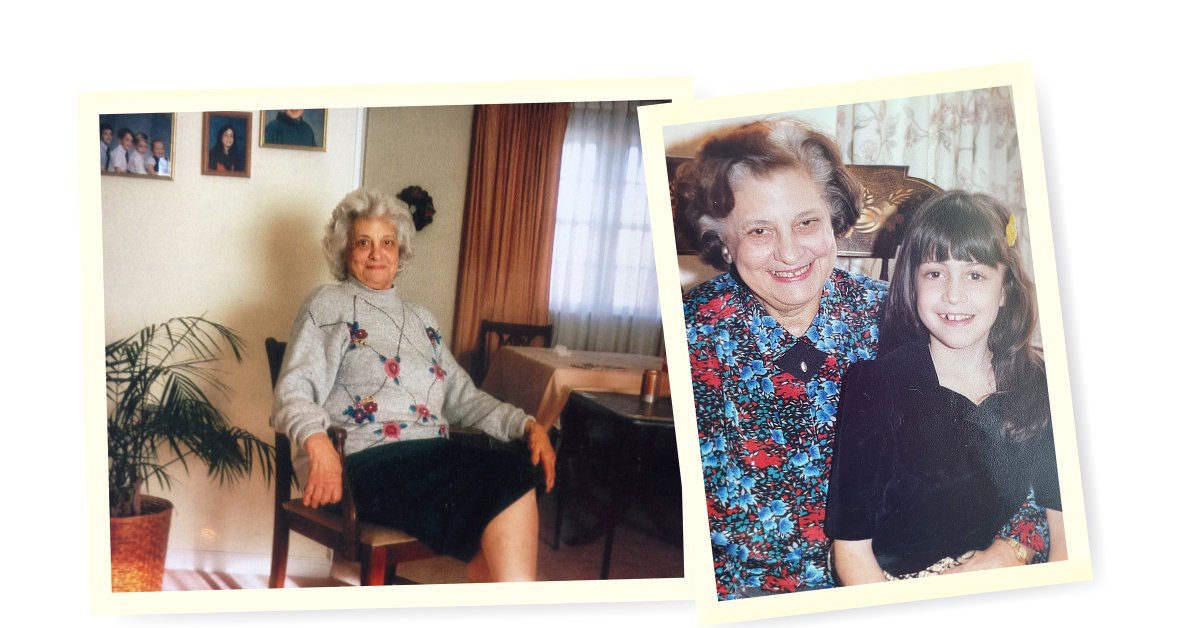 While working from the kitchen the other day, I saw a glimmer of bronze flit by so quick, if I didn’t already know what it was, I would have second-guessed seeing anything real at all. My miniature dachshund puppy, Betty, was at it again. When I caught her, I let out a screeching “Leave it!” She grinned back at me with pointy teeth, wilted pillow stuffing dangling from her snout. Pinned under her front paws was the pillow’s cover: a moldered, yellowed cloth with patchwork remains of a house and flowers.

This withered fabric was once the plush, sunny throw cushion I bought for my grandmother on a choir tour in Edinburgh when I was 15. I got it for her because it reminded me of her. As matriarch of my Italian-American family, she was the person we yearned to return to, her generousness of presence bright, soft and unconditional.
[time-brightcove not-tgx=”true”]

Gran was my surrogate parent when my own parents were teaching, sometimes both day and night. She was always there—when I broke and sprained bones at recess, when I tripped in the schoolyard and got a concussion, when my crushes didn’t like me back. It was unbearable to think I would someday live without her soundness of care, without her. And yet I somehow have, for the past 11 years.

Read More: Why You Need to Make a ‘When I Die’ File—Before It’s Too Late

A week after Gran died, I helped empty her apartment. I placed her jewelry case filled with costume pieces I’d played with and a few other keepsakes in a cardboard box. Then overcome with an urge to flee, I put the pillow in the box and left. I’ve kept it ever since, either pressed to my chest overnight or against my back when I’m working.

Recently I came across a new study about relics dating back more than 2,000 years. Between the walls of an Iron Age roundhouse, nail cleaners and bone spoons were discovered. In unearthed floors, grinding stones were found. Dr. Lindsay Büster, an archaeologist at University of York, argues that these objects are proof that, since prehistory, people have been doing what you and I do—ascribing emotional value to material things we associate with our departed loved ones.

I tried to recall moments that spurred the pillow’s metamorphosis. It was just a pillow in the weeks between buying and giving it to Gran, when it sat on my lap on bus rides from Inverness to Loch Ness to Loch Lomond and beyond. But on the morning I gave it to Gran, it became something else. For 13 years, Gran would start her day by placing in the position of greatest distinction on the bed: ahead of the ones she slept on. Grandchildren were not allowed to touch it, especially on spaghetti Sundays when our fingers were greasy, our clothes mottled with sauce. I do not remember when this emblem of Gran began to fall apart. But I know better than to blame my dog.

When someone you love dies, how do you find a foothold between holding on and letting go? Because of the pandemic, many of us have been reflecting on this question more than usual. I know people who have lost family and friends and brought home relics like I have: a sweatshirt, a hat, a brush webbed with hair. What they and the Iron Age souls who inhabited the roundhouse appear to do differently from me is leave these artifacts intact, on display or stored away. I, on the other hand, have been wearing out my shrines.

Read More: How a Pandemic Puppy Saved My Grieving Family

One of my favorite stories from childhood is “The Velveteen Rabbit,” in which a child loves a cherished object so much that it becomes real and he has to let it go. I’m learning that’s where I’m heading. I draped Gran’s costume jewelry on my neck and up my arms, even though a necklace snapped and a bracelet popped. I ran her hand mixer so hard that just one beater works. And while a part of me thought I was prolonging the life of the pillow by holding on to it so tightly, the wiser part of me knew I was hastening its decay.

Now when I look at what’s left of the pillow, I see what it has physically become: wisps of cotton ridden with mystery dirt, dog drool, skin cells, coffee stains, a splotch of red sauce (sorry, Gran), sweat, mold and dust. All the while, I’ve been turning it into tactile, huggable grief—grief I’ve held so hard and close, and by making the pillow less durable, I’ve transformed mourning into something endurable. As a result, the pillow slowly becomes less precious. The more I break it down, the more I release Gran’s tangible presence, reminding me there’s a different, infinite Gran I can keep, one impervious to touch.

What if we allow our objects of remembrance to live on with us until they live no more? What if they don’t outlast us, entrapped in our walls and our floors? What if you wear that sweatshirt incessantly the way a toddler wears a superhero outfit? What if you let it fade and fray?

Read More: I Thought I’d Get to See My Mother Again. Then the Pandemic Hit

When losing Gran was new, her objects became, for me, the person they belonged to. Now, as Gran transcends the pillow’s unraveling, I see how far I’ve come in what’s left of it.

The coastal blues continue to dull and the blossom pinks continue to mute, but not every step toward its demise looks like decay. Even though another ragged edge of a flower appears to vanish every time I check, the stems, now more pronounced, give the impression of growing because they lean toward each other. The house loses its roof. And on Betty’s latest rampage, she tears off the swathe of fabric marked with red sauce. She also devastates a corner so putrid-looking, it resembles Dijon mustard tie-dye. Without this piece, flowers suspend into a blotchy, discolored sky. They’ll probably go next, but when they do, I won’t be ruined.

Just the same, I will hold this pillow until I can hold it no more. And when it becomes nothing, the shape of my love will still hold.