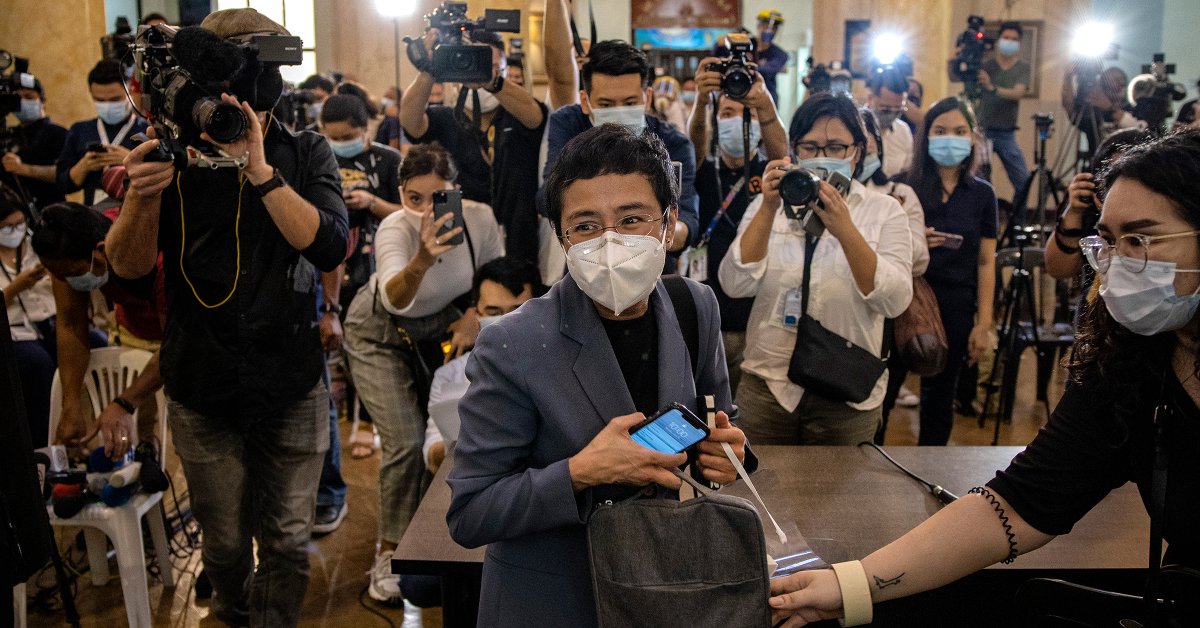 Journalists in the Philippines, one of the most dangerous countries in the world for reporters, celebrated the crusading Filipino journalist Maria Ressa after the Norwegian Nobel Committee awarded her its Peace Prize on Friday.

Ressa, CEO and co-founder of online news organization Rappler, became the first Filipino individual Nobel laureate. She and Russia’s Dmitry Muratov were selected among 329 candidates, with the selection committee saying that the two recipients represent journalists who stand up in the midst of “increasingly adverse conditions” against them.

Read more: ‘It Is a Battle for Facts.’ What Nobel Peace Prize Winner Maria Ressa Understands About Why She Was Chosen

In a statement, the National Union of Journalists of the Philippines (NUJP) lauded Ressa for upholding press freedom. “We hope this award will shine more light on those who put the spotlight on the truth at a time when basic freedoms and democracy are under attack,” the NUJP statement said.

The Foreign Correspondents Association of the Philippines said her win is a victory for press freedom advocates. “We hope that Ressa’s win drives international attention to the plight of the Philippines’ local media workers, and sends a signal that a free, unstifled and critical press is necessary for a healthy democracy,” it said in a tweeted statement.

The Foreign Correspondents Association of the Philippines congratulates journalist Maria Ressa on being the first Filipino to win a Nobel Peace Prize. Her win is a victory for press freedom advocates across the Philippines…

Lawmakers and government officials critical of Duterte have congratulated Ressa too. Vice President Leni Robredo, a key opposition figure who previously called Ressa’s conviction for online libel as “weaponizing law against media,” took to Twitter to congratulate the Nobel laureate. “This is a recognition and affirmation of your tireless efforts to hold the line for truth and accountability,” Robredo said.

Congratulations to @mariaressa for being awarded the 2021 Nobel Peace Prize! This is a recognition and affirmation of your tireless efforts to hold the line for truth and accountability. I applaud your courage. Mabuhay ka! pic.twitter.com/o5RQXoXdG6

The price of press freedom in the Philippines

The Philippines is a harsh battleground for the press. It ranks 138th out of 180 countries in the World Press Freedom Index by France-based organization Reporters Without Borders (RSF). The biggest massacre involving media workers in the world ever recorded by the Committee to Protect Journalists (CPJ) happened in the southern part of the Philippines in 2009. The 32 journalists who died there are among the 89 media-related killings tallied in the country since 1992.

This dire situation only worsened when Philippine President Rodrigo Duterte took office in 2016. The RSF named Duterte as one of the world’s “predators of press freedom,” especially since his administration has gone after local media outlets that covered his deadly drug war. Among these organizations is online news organization Rappler, which has Ressa at the helm.

She also fought against disinformation in a country where almost 97% of its Internet users are on Facebook. Duterte had used the platform to rally support for his war against illegal drugs in the Philippines, which has led to the controversial deaths of 12,000 Filipinos according to the Human Rights Watch. Ressa once said the spread of fake news has put democracies at risk, and urged lawmakers to clamp down on purveyors of disinformation while convincing journalists to do better reporting to stop it from spreading.

As Duterte spat verbal attacks at Rappler and Ressa, his government lodged a string of legal cases against them—ranging from breach of foreign ownership rules in the Philippines, to alleged tax violations. Critics have viewed these actions as harassment and political intimidation for Rappler’s critical coverage of the Duterte administration, which caused a chilling effect on media workers.

Ressa’s plight in a country that was once known for being a champion of press freedom in Asia caught international attention — including in 2018, when TIME named her among the “Guardians” of press freedom recognized as Person of the Year.

‘Inspiring momentum in the right direction’

The win came at an important time, says political observer Richard Heydarian. With Ressa amassing international support, Heydarian believes that the prize will give greater hope to government opposition ahead of the May 2022 presidential elections.


“I think now that we’re heading into a new election and there’s a hope of change, of good change, this Nobel Peace Prize will go some way in inspiring that momentum in the right direction,” Heydarian tells TIME.

But public sentiment might be different. Jonathan de Santos, NUJP’s chairperson, says Ressa’s win may not spur much change on the ground since Duterte’s satisfaction rating stayed above 70% in recent local polls—higher than previous Philippine leaders. He also has a history of verbally lashing out at international bodies that raise questions about his governance, like the International Criminal Court and the United Nations, so his allies are expected to do the same.

The Duterte government has previously claimed that cases filed against Ressa and Rappler are not related to press freedom, and de Santos believes it will continue to do so. But a Nobel Prize can help highlight how bad the situation is on the ground.

“Unfortunately, the prize will not make the cases that she is facing go away,” de Santos tells TIME. “But it could prompt more journalists in the Philippines and abroad to work together and protect each other from threats against press freedom and against the profession.”