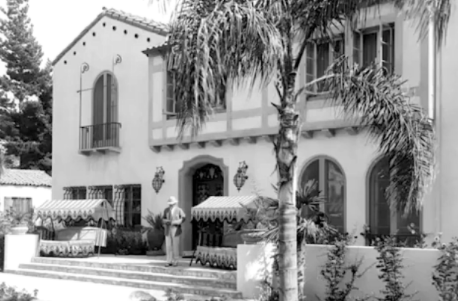 Alas, I never had the opportunity to visit the Garden of Allah. By the time I moved here 50 years ago, the Garden was gone and the Lytton Savings building stood on the lot on Sunset Blvd. between Crescent Heights and Havenhurst. I’ve always been fascinated by the legend of the Garden and wished I could have spent one night there, or at least crashed a party by the pool.

The Garden was famously owned by and named after silent film star Alla Nazimova, an exotic Russian import who allegedly had affairs with both of Rudolf Valentino’s wives. In 1919, the actress acquired the property at 8152 Sunset from real estate developer William Hay, who had built the estate in 1913. The palatial home stood on what must have been a secluded parcel of land several miles from the movie studios, making it ideal for keeping her get-togethers private.

Unfortunately, Nazimova’s career took a nose-dive in the 1920s, so she added 25 “villas” and a pool to the estate in hopes of turning it into an income-generating hotel. Even more unfortunately, the partners that had financed the expansion proved to be untrustworthy, and less than a year after the hotel opened in January 1927, the actress sold out her share of the property and made another try at Broadway. In 1930, the new owners officially named the hotel the Garden of Allah.

Maybe the fun was over for Nazimova but for the denizens of Hollywood, it was just starting. The Garden of Allah became the place for the famous and infamous to hide their escapades from the prying eyes of the public. Novelist F. Scott Fitzgerald, who had fallen on hard times after early success as a chronicler of the Roaring Twenties, resided at the Garden while toiling as a screenwriter to keep his wife Zelda in a private mental institution back east. Conveniently, his lady love, gossip columnist Sheilah Graham, lived on a nearby side street.

From the 30s into the 50s, a long list of luminaries called the Garden home while staying in Hollywood. Both Humphrey Bogart and Errol Flynn preferred Villa 8, while Greta Garbo, Ronald Reagan, and Frank Sinatra all checked in for short periods. The pool was a regular gathering spot for celebrity-studded parties, especially since the hotel was fortuitously located just outside the Los Angeles city limits and the jurisdiction of the LAPD. Even literary giants like Robert Benchley and Dorothy Parker, who had been lured west by movie studios offering big bucks for their writing talents, would let their hair down after a few drinks. Any party attended by the likes of John Barrymore, Tallulah Bankhead, John Carradine, and Ava Gardner had to have been wilder than anything happening on The Strip these days.

Good things don’t last forever and over the decades, the Garden fell into disrepair while newer, more luxe accommodations drew business away from the hotel. The curtain finally fell for the Garden of Allah in 1959, after new owner Bart Lytton purchased the property as the location for his latest bank. After a lavish farewell party and an auction to liquidate the furniture and fixtures, the buildings were razed and the 50s-style Lytton Savings bank took over the spot. All that remained of the legendary celebrity hangout was a detailed miniature version of the Garden in a kiosk behind the bank.

Later, a boring but convenient strip mall was added to the rear of the lot behind Lytton Savings. This mall had ample parking and hosted several fast-food joints including a McDonalds with the most treacherous drive-through in L.A. county. The walls were adorned with various colors of paint, a testament to drivers who failed to correctly estimate the narrowness of the passage. I could barely squeak through in my vintage Mustang but soon decided to play it safe by parking out front and going inside to grab my Big Mac and fries.

Another reason for parking at this mall was making a periodic trip to my dentist, a stunning German lady known at the “Bond Girl Dentist” for her big hair and habit of coming to work every day in full makeup. Good dentist, too – I still have my crowns from 20 years ago.

Now, except for the McDonalds’s drive-through, the site is vacant awaiting the arrival of a multi-story monstrosity guaranteed to snarl traffic on Laurel Canyon Blvd. all the way up to Studio City. The proposed monolith will have 203 residential units plus 57,300 square feet of retail and residential space. Yeah, more mixed-use in an area that has too much already. Residents of WeHo just aren’t that fond of the whole “mixed-use” thing, probably because most folks who can afford to drop $1M on a condo don’t want to live on top of an all-night pizza parlor.

While it’s certain that whatever occupies this hallowed ground in the future will be less interesting than the Garden of Allah, one can still pass this section of Sunset Blvd. and imagine legendary movie stars lounging by the pool or entertaining friends in their own private villas. There’s no way the idyllic decadence of the Garden of Allah could exist today, with TMZ and paparazzi lurking outside every coffee shop and medical building, but we can dream, can’t we?