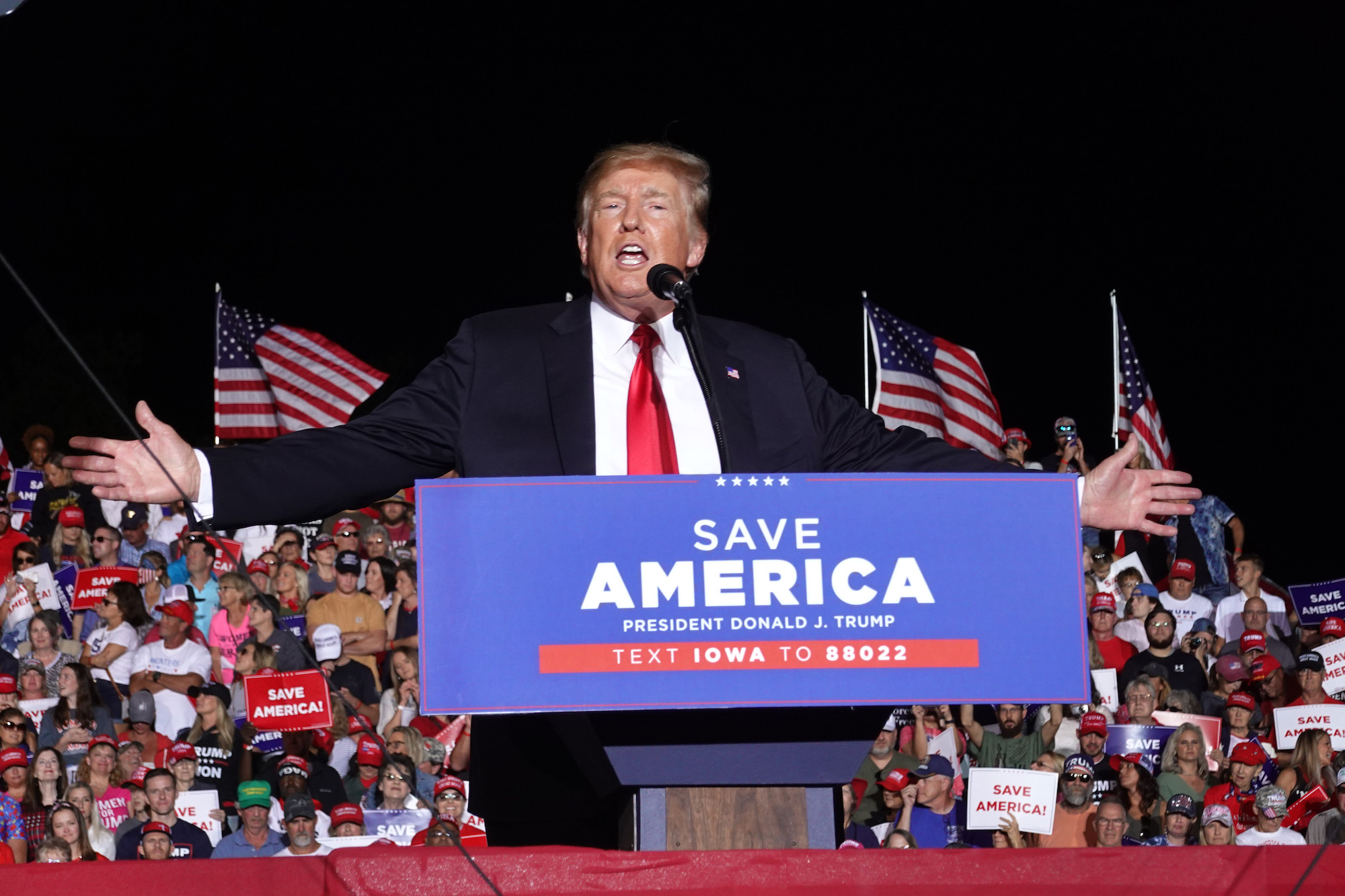 Former President Donald Trump spewed lies, nurtured grudges and bashed Biden on Saturday night at the state fairgrounds in Des Moines, Iowa — the state where voters, according to a recent Medicom/Register poll, like Trump even more now that he isn’t in power. The speech lasted an exhausting hour and 43 minutes.

The rally began with typical Trumpian rhetoric. Sen. Chuck Grassley (R-Iowa) accused President Joe Biden of tanking the economy and having “no border” with Mexico as he referred to Trump’s beloved southern wall as “the fence.” Republican Gov. Kim Reynolds spoke next, saying that the Biden administration can be “summed up in three words: inaction, chaos and crisis.”

The dark theme continued once Trump took the stage and accused Biden of bringing the country to “the brink of ruin.”

Trump went on to attack Biden and congressional Democrats (including “Crazy Nancy Pelosi”) for trying to pass a bipartisan infrastructure bill and another social safety net reconciliation that would assist Americans with child care and climate change mitigation measures, which Trump referred to as a “socialist transformation bill… an open borders bill, it’s an American energy destruction bill.”

The former president also bemoaned that Biden overturned his racist travel ban that prevented citizens from a number of majority Muslim nations from entering the United States. “We don’t want Fifth Avenue blown up,” Trump said, falsely equating immigration and crime. “We have enough crime on Fifth Avenue.”

Trump’s usual lies about abortion were on full display as he falsely claimed doctors are “ripping babies from their mother’s womb” and adding another falsehood, “And, in fact, killing babies after the birth.”

When beginning the relitigating 2020 portion of the evening, Trump continued his lies claiming he won the election. “First of all, [Biden] didn’t get elected, OK? Forget that,” Trump said, adding, “Hillary conceded. I never conceded.” (He did.) He circled back to the topic later in the speech, bringing up the Arizona audit and claiming people “used Covid to cheat” in the election. During this rant, the crowd began to chant, “Trump won! Trump won!”

The crowd at Trump’s rally in Des Moines is completely dead as he ticks through his favorite conspiracy theories and lies about the 2020 election pic.twitter.com/Hzjp3BySxn

The rally included numerous references to World War II General George Patton. The opening scene from the film Patton played on a big screen ahead of Trump taking the stage. “Do you think General Patton would have left early from Afghanistan?” Trump asked the crowd, neglecting the fact that his administration negotiated the terms of withdrawal, setting a date of May 2021 — which Biden pushed back to August — and agreeing to release 5,000 imprisoned Taliban fighters. (“George C. Scott, did he win the Academy Award [for playing Patton]? Did the movie [win]? I think so,” Trump later said.)

The former president then mocked Biden, saying he frequently doesn’t know what state he’s in, even though within minutes of saying that, Trump mixed up Pakistan and Afghanistan.

Trump gets confused and starts talking about withdrawing from Pakistan pic.twitter.com/8uOJpuirFV

Regardless of the ranting and lies, attendees at the rally were fired up. Before the rally even began, one Trump-supporter broke down into tears on conservative network RSBN because, she said, her entire family has “turned liberal” because they’ve been “brainwashed.” But, she added, she has hope because of Trump.

Woman at Trump rally today says her whole family has “turned liberal” and they hate Trump. Then breaks down crying and says, “I have complete faith that this man is going to basically save the world. Not just us, everyone.” pic.twitter.com/Z5g0YXC54m

“I have complete faith that this man is going to save us, he’s basically saving the world,” she said. “Not just us, everyone.”