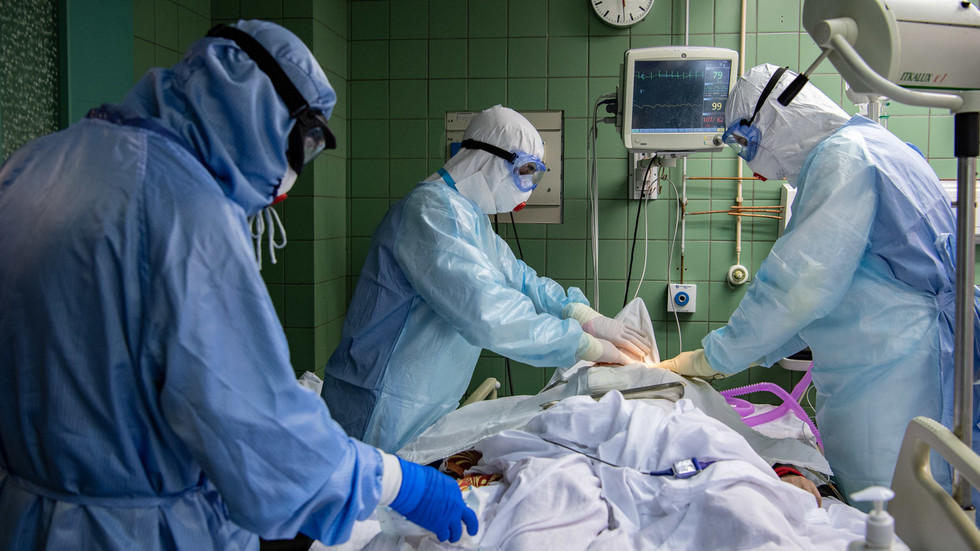 A group of Russian scientists have created a drug that may potentially revolutionize the treatment of Covid-19 by defusing the most catastrophic reaction the disease causes in patients, while not destroying their immune response.

The drug, called Leitragin, was developed by the Biomedical Technology Research Center of the Russian Federal Medical and Biology Agency (FMBA), and is currently undergoing clinical trials in Russia. Although its base substance was previously known and used in ulcer treatment medicine by Soviet and Russian doctors, it was the FMBA team that discovered how to apply it for the treatment of severe cases of Covid-19 and, potentially, other deadly diseases that cause life-threatening lung inflammation.

The Russian scientists had tasked themselves with finding a substance that would act as an ‘off switch’ for the chain reaction that, after being triggered by the invading SARS-CoV-2 virus, actually causes potential organ failure and death. This reaction of the immune system, dubbed the “cytokine storm,” has been variously described as our body’s overreaction to the virus or a “suicide attack” against the invading pathogen, and even as an evolutionary mechanism to stop the spread of deadly infections with the death of the host.

Trying to stop this uncontrolled immune response while still preserving the body’s ability to fight the virus without causing more damage is what scientists and medics in intensive care units across the world have been wrestling with during the Covid-19 pandemic. In that regard, Leitragin is being touted as a game-changer, since its novel mechanism acts in a targeted way, and is said to be completely safe for one’s health.

RT interviewed the head of the Russian team of scientists behind Leitragin, and talked to an independent researcher studying cytokine storms, to learn more about the potential of the novel drug.

In search of the deadly trigger

A cytokine storm, also known as hypercytokinemia, is triggered by tiny messenger proteins called cytokines, which are normally our body’s trusted agents in dealing with infections, inflammations and trauma. However, when dealing with some dangerous pathogens such as H1N1, H5N1, the Ebola virus, and SARS-CoV-2, the immune system may decide it’s being overwhelmed by the virus and “go mad.” This can result in massive inflammation and, potentially, septic shock and death, Maxim Skulachev, a leading research associate at the Moscow State University’s (MSU) Physicochemical Biology Research Institute, told RT.

Up until now, a cytokine storm was believed to be caused by an uncontrollable release of dozens of different cytokine types, making it difficult to contain. However, scientists at the FMBA Biomedical Technology Research Center say they might just have got to the very bottom of the issue and pinpointed a single key culprit.

The group, led by the head of the center, Vladislav Karkischenko, published the results of their drug’s pre-clinical trials on mice in the Journal of Immunology Research in late September.

Also on rt.com
‘Game-changer’: Pfizer developing pill to treat Covid-19, may hit market by end of 2021

At first, the Russian scientists spent months figuring out their Covid-19 infection model – according to Skulachev, the rodents’ response to the disease doesn’t quite match that of humans even in so-called “humanized” mice. Then, they went through a process of drug screening, and identified a substance defusing what they believe is one particular cytokine triggering the storm.

The cytokine in question is called high mobility group box 1 protein, or HMGB1, Karkischenko told RT. Released en masse by the immune cells during severe Covid-19 cases, it triggers the release of numerous other cytokines, turning it into an “uncontrollable process.”

Previous research hasn’t considered HMGB1 as the “main cytokine,” but it’s so ubiquitous, its numbers could be a thousand times higher during the infection, Karkischenko said, which points to it being responsible for the “final cascade of reactions.”

The FMBA scientists are not alone in their assumptions. The HMGB1 protein has already drawn the attention of researchers around the world, and was named as a potential therapeutic target in treating Covid-19.

Commending the “enormous amount of work” done at the FMBA, MSU’s Skulachev says that a team at his institute has achieved similar results during their own research into cytokine storms. Moreover, he believes the two teams may have independently discovered a universal “evolutionary suicide mechanism” that kills an organism to prevent the spread of severe infections.

“This is an evolutionary mechanism we inherited from our ancestors,” Skulachev said, adding that the evolutionary trait hasn’t caught up with the fact that humanity has developed vaccines and medicines to deal with such diseases.

Currently, medics do not have many options in their fight against the cytokine storm. They have to either use monoclonal antibodies – highly expensive drugs capable of suppressing a single type of cytokine – or “kill” the immune system completely with steroid anti-inflammatory drugs. Both methods have serious drawbacks.

The FBMA center’s research showed that suppressing the oft-targeted cytokines might not always provide the required effect as the “storm” could continue raging after a brief respite, Karkishenko said. Skulachev, meanwhile, notes that using hormonal steroid drugs could be even more dangerous.


“We cannot live without the immune system. If a person has been suffering from a severe viral infection, one has to be meticulous in choosing a moment for administering the drug. Do it a few hours too early and a virus would kill a person through self-replication,” he said.

In their search for a solution, the FMBA researchers tried an opioid hexapeptide called [D-Ala2]-dynorphin 1-6, and the results turned out to be surprisingly promising. Mortality rates among mice with chemically induced conditions similar to cytokine storms in humans fell by four times, Karkishenko said. Noting that Western scientists seem to be focused on opioids as components of painkiller drugs, he adds that these substances are much more multi-faceted, and can also be harmless.

“In our article, we were able to prove that opioid receptors trigger processes with a massive anti-inflammatory effect while causing no damage to a person,” Karkischenko said.

In June, Leitragin was registered by the Russian health authorities as part of an emergency procedure. At that time, the FMBA said that it was already tested on some 300 volunteers and showed very positive results since none of the patients, who were administered Leitragin, were admitted to intensive care units or died. They also tended to recover several days earlier than those who received “standard” treatment, Karkischenko said. Leitragin has initially been intended for testing on Covid patients with moderate severity of the disease, but some doctors have taken it upon themselves to treat critical patients, he added.

“This drug is designed to solve an unsolvable problem. These patients virtually have no other alternatives,” Skulachev explained, referring to severe cases of Covid.

Despite what Karkischenko says are promising results, the scientists behind Leitragin still have to prove its effectiveness in clinical studies. The center is now working on a large-scale publication that would involve clinical trial results and more information about the drug itself. Russia’s hospitals, meanwhile, are allowed to treat patients with Leitragin as part of a limited use authorization.

Also on rt.com
Covid-19 has mutated so much in 18 months that proven treatments are often failing, says head of Moscow’s top virus hospital

If proven effective and safe, though, the drug may be found to have uses far beyond Covid-19 treatment, since it’s designed to deal with the immune system’s reaction and not one specific virus.

“Leitragin is aimed at suppressing inflammation processes,” Karkischenko said, adding that “it is a drug based on an absolutely innovative approach” and can be used to treat “various conditions.” The FMBA center is already working on different drug formulations for Leitragin.

“Some 80% of all critical conditions [in patients] in intensive care units are linked to cytokine storm and potentially to this specific protein causing it,” Skulachev explained, noting that the “potential range of uses for this drug could be extremely wide.”

It could be a major development.