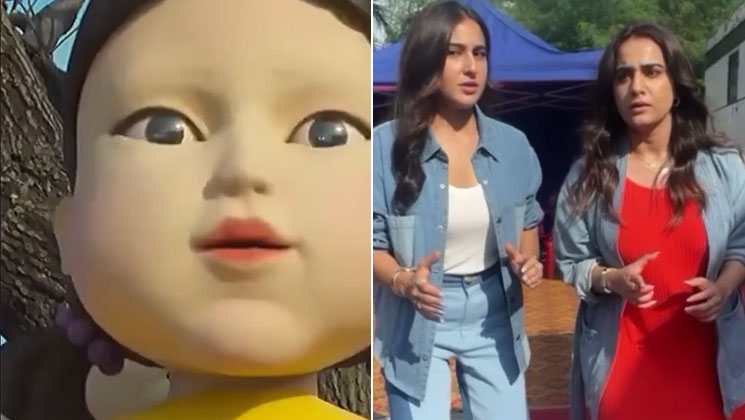 Netflix’s Squid Game is currently ruling the roost. From memes to gifs, this Korean show has taken the internet by storm. Everyone is just raving the show. Bollywood celeb Sara Ali Khan has also become fan of Squid Game and taking to her Instagram handle, the actress shared a fun video where she showed how she would greet people in her signature ‘namaste’ style even if it kills her on the show.

In the video, Sara can be seen playing the Red Light Green Light game with Kusha Kapila. For the unversed, in this the game of the show the participants require to stay still when a giant doll says ‘Red’. Sara, who is known for greeting the paparazzi with namastes, is asked by Kusha to say hello, and after hesitating, she does her signature Namaste. As per the rules of the game, Sara gets shot.

The video is really hilarious and sharing it, Sara wrote, “If Sara Ali Khan was in Squid Game? Her greeting style would be the same (sic).”

For the uninitiated, Squid Game is a South Korean survival drama series where a group of people with financial crisis agrees to play mysterious children’s games. Their goal is to win a huge cash prize of KRW 45.6 billion but for that they have to sacrifice a lot. It has now become popular all across the globe and currently the No. 1 show on Netflix. Directed by Hwang Dong-hyuk, the show stars Lee Jung-jae, Park Hae-soo , Oh Young-soo, Wi Ha-joon, Jung Ho-yeon, and Heo Sung-tae among others.

Coming back to Sara Ali Khan, she will be seen in Atrangi Re that also stars Akshay Kumar and Dhanush. It is directed By Aanand L Rai.

Also Read: Squid Game REVIEW: Lee Jung-Jae, Park Hae-Soo starrer is a gripping watch that keeps you on the edge