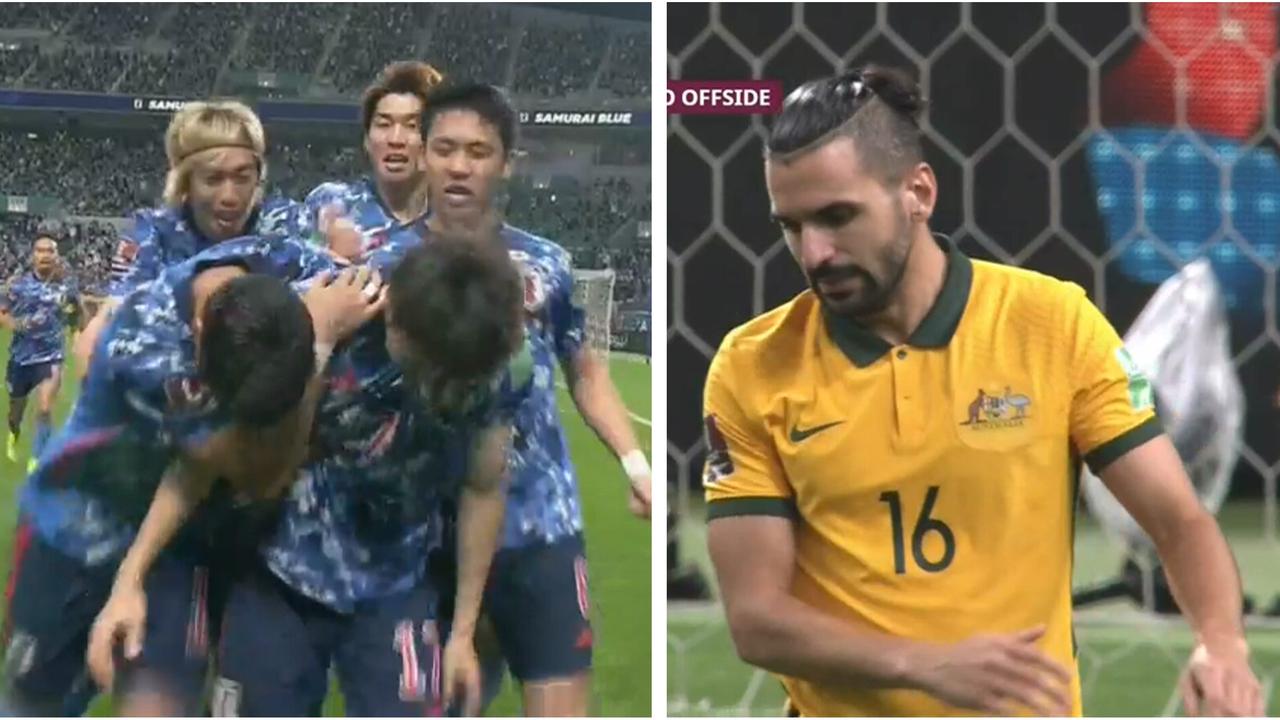 Welcome to live coverage of the Socceroos’ World Cup qualifier against Japan.

The Socceroos have pulled level in the closing stages against Japan thanks to a stunning Ajdin Hrustic free-kick in the 70th minute.

Hrustic charged forward but was collected by a sliding challenge from Morita on the very brink of the box. It was initially deemed a penalty by the referee, and Boyle lined up the ball on the 12-yard-dot. But after a lengthy delay, the video referee overturned the decision and deemed it a free kick just outside the 18-yard box, awarding a yellow card to Morita.

And Ajdin Hrustic scored a sublime strike from the dead ball, smashing it into the crossbar and down into the net. It was his second goal for the Soceroos, both coming from free kicks.

Half-time update: Japan showed no signs of the sluggishness that has dogged them in recent matches, getting off to a dazzling start with an intensity in defence and attack that left the Socceroos shell-shocked and down an early goal.

German-based midfielder Ao Tanaka broke the deadlock in just the eighth minute, firing home an unstoppable shot toward the back post from a tight angle.

Liverpool star Takumi Minamino whipped in a cross which fell to Tanaka after Australia’s left fullback Aziz Behich failed to clear the ball with a desperate lunge. It was Behich’s third mistake in a nightmare opening period as Australia struggled to get into the game, regularly coughing up the ball cheaply under pressure from Japan’s high-pressure defence.

Australia nearly hit back in the 13th minute when striker Adam Taggart controlled a long throw and touched it back to Tom Rogic, whose deflected volley went for a corner. Sainsbury won the header and found the target but it was well saved. Hrustic then forced another corner when he whipped in a shot from out wide, trying to catch the keeper off guard.

Veteran striker Yuya Osako almost doubled the advantage in the 34th minute when a heavy touch from Ajdin Hrustic gifted possession in the middle of the park and Japan streamed forward. Osako surged to the edge of the box and twisted and turned past Trent Sainsbury, but under pressure from Sainsbury and central defensive partner Harry Souttar poked his shot wide of the upright.

Ryan was forced to fling himself at a low driven cross in the 25th minute, throwing himself in front of a sliding attacker with Souttar and Sainsbury also at inches away.

Follow all the live action in our blog blow!

Veteran striker Yuya Osako nearly doubled the advantage in the 34th minute when a heavy touch from Ajdin Hrustic gifted possession in the middle of the park and Japan streamed forward. Osako surged to the edge of the box and twisted and turned past Trent Sainsbury, but under pressure from Sainsbury and central defensive partner Harry Souttar poked his shot wide of the upright.

In the 43rd minute, a lightning-fast Socceroos counter-attack nearly levelled the scores. Martin Boyle flicked the ball over a defender to Adam Taggart, who played a quick one-two with Tom Rogic which sent the striker into the box. Taggart lashed his shot goalwards before a brilliant save from Shūichi Gonda sent it crashing into the post.

On the brink of half-time, Takumi Minamino turned on a dime and unleashed a fizzing low shot from outside the area that sent Ryan sprawling with a brilliant reaction save.

Changes were expected following the short turnaround following the win over Oman. Arnold said: “There will be a couple of fresh-leg changes for this game. We’ve got to keep that energy up and the boys who have recovered really well that played the other night will play, (while) the ones who (have recovered) little bit less, we’ll probably make a few fresh-leg changes (for them),” he said.

Aaron Mooy will start, after Arnold said: “He’s ready to go. If there’s one thing about him, the adrenaline will kick in and it won’t matter that he hasn’t played many match minutes for a while. His experience is enormous and … when he’s come on in the three games, he’s just taken control of the game.”

To qualify for a fifth consecutive World Cup, Australia must finish either first or second in Group B, which includes ten matches to be played from September 2021 to March 2022, to qualify directly.

A third-place finish would send the Socceroos to a play-off against the third-place team from Group A, followed by an intercontinental play-off – the fraught route Australia took in 2018.

Follow all the action in our live blog below. If you can’t see the blog, CLICK HERE.

While Japan have stunningly lost two of their past three matches, the 26th-ranked Blue Samurai have proved a thorn in the Socceroos’ hearts for more than a decade and include two superstars in Liverpool’s Takumi Minamino and Celtic’s Kyogo Furuhashi.

Although Australia will head to Tokyo full of confidence after beating the nation that defeated Japan back on matchday one, Arnold’s men have lost their last seven matches against the nation, a run that stretches back to 2009. And they’ve never beaten Japan in their own nation.

But Arnold attempted to heap the pressure back on his opponents.

“The Japanese no doubt have all the pressure on them because they have only won one game out of three,” he said.

“Every time we step out on the field we expect to win the game. We will do that again on Tuesday.”

Arnold, however, said the Socceroos needed to respect their opponents but make sure they build on their own winning momentum, having won a world-record 11 straight in this qualification campaign.

“I think the Japanese DNA is that they have always had very technical and skilful players,” he said.

“Japan have many players playing in top leagues around the world, in Europe (all but five of the squad play in Europe), and plenty of players that have a lot of qualities to really hurt opposition teams. We need to respect that, of course.

“We will be looking to take advantage of the form that we have, the momentum we have, and who we are as a team at the moment to really come here and put Japan under pressure. We are confident that we can get the win.”

Japan coach Hajime Moriyasu, who job is squarely on the line, remained confident his side can get back on track.

“We got tired and lost our rhythm against Saudi Arabia, that’s when they capitalised and scored,” he said. “If we don’t give up, I believe we can still win a ticket to the World Cup.”

Tuesday’s night clash against Japan will be Arnold’s 19th match from 22 games in charge since taking over Dutchman Bert van Marwijk in 2018 to have been played on foreign soil.