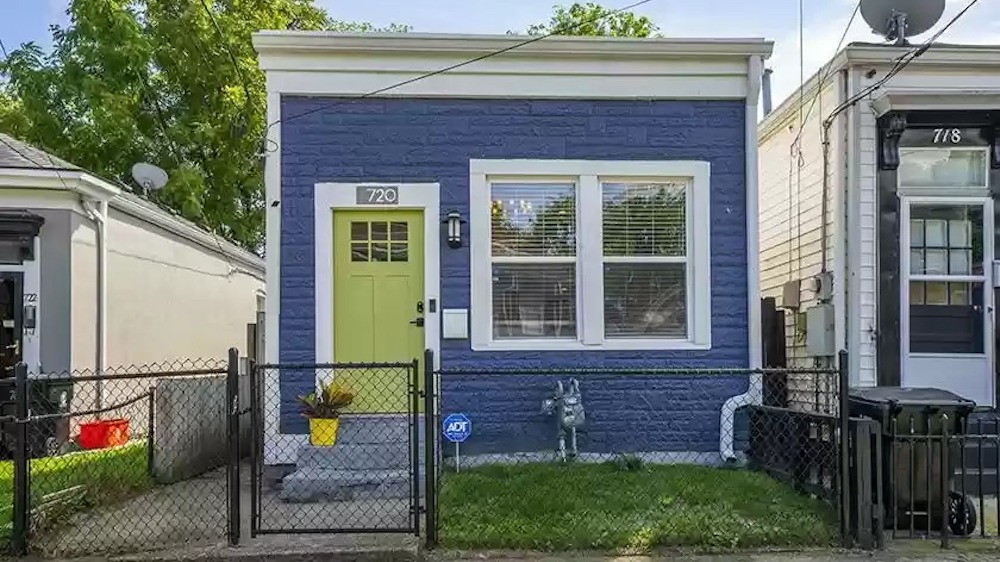 Buyers of these distinctive older homes usually have two options: a fixer-upper (less expensive) or a modernized version (more expensive).

Whether they’re in mint condition or in need of some work, the concept remains the same. These slim residences are known as shotgun homes, because in theory, firing a shotgun from the front door clear out to the backyard is a cinch, thanks to the home’s long, narrow layout.

We’ve found an example that might encourage a buyer to pull the trigger. This 944-square-foot home in Louisville’s Smoketown Jackson neighborhood is so beautifully restored, you won’t have to lift a finger after you move in.

Built in 1900 and offered for $174,300, this 121-year-old home embraces its historical status, while flaunting plenty of style. It’s also easy to spot from the street, thanks to its chartreuse front door and blueberry-blue exterior.

According to the listing details, the two-bedroom, one-bathroom dwelling was “taken down to the studs” for a complete renovation. Which means everything is fresh and new.

It has new windows, a new roof, and all-new systems and infrastructure. Gutters and siding were replaced. Inside, the new look features shiplap on the fireplace chimney, a new electric fireplace, restored original pine flooring, granite kitchen countertops, and white, Shaker-style kitchen cabinetry.

In the lone bathroom, there’s an appealing, custom-tiled shower, plus a new vanity, as well as new light fixtures and fresh tiled floors. Each of the two bedrooms offers a sizable closet and a ceiling fan to contend with humid summers. There’s even a laundry room crafted out of a closet.

And if you’re thinking, “This house might feel small,” the opposite is in fact the case.

Eleven-foot ceilings in both the kitchen and living room, along with an open layout, make the first floor appear larger. The fenced-in yard with a deck could appeal to a dog owner or someone with a green thumb. And because this property is historic, so are its trees, which provide plenty of shade.

Jeremy Allen with Weichert Realtors-ABG Properties is handling the listing.