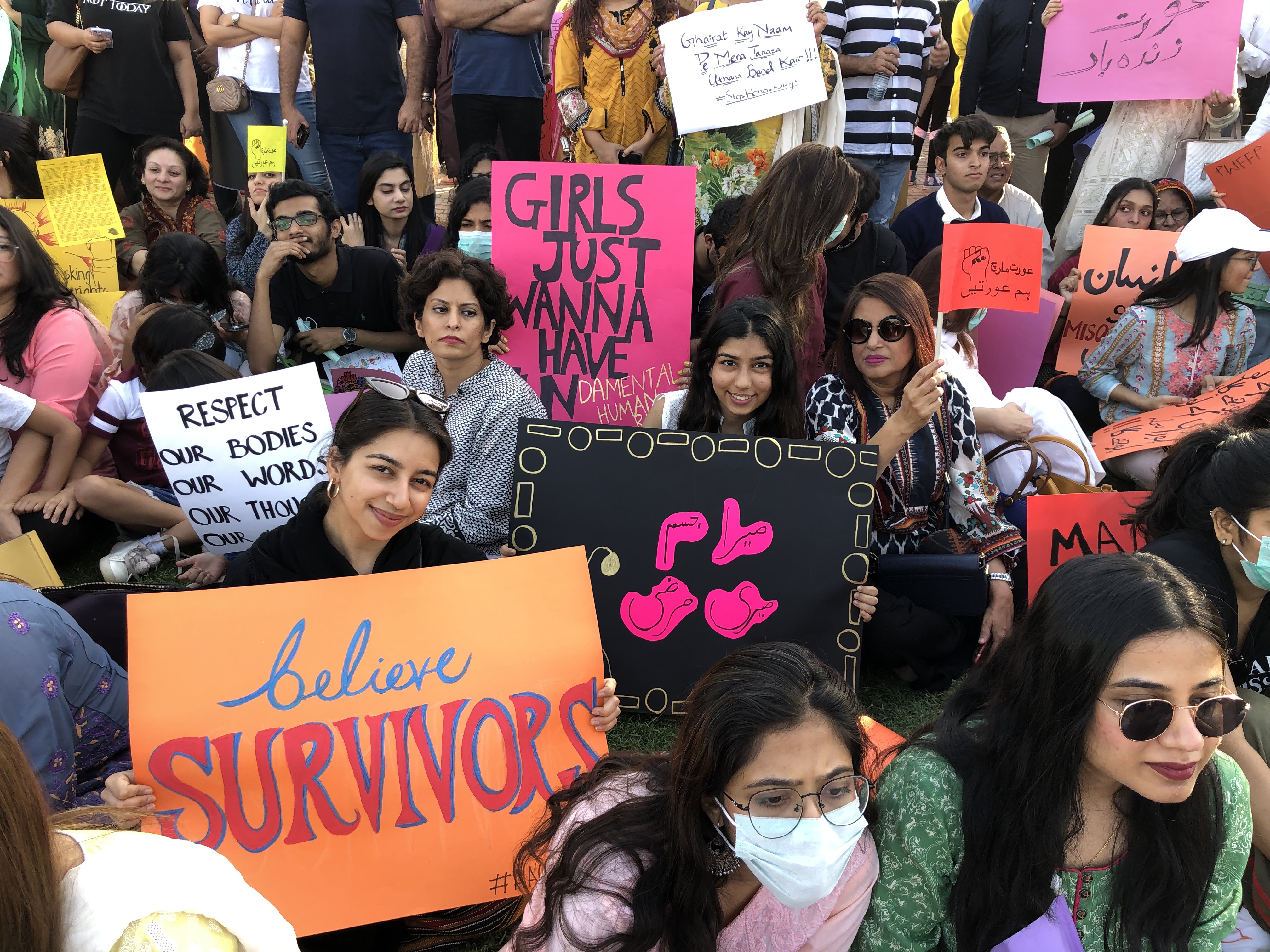 Karachi, Oct 12 (IPS) – The mauling, groping and tossing of a young woman by a crowd of between 300 and 400 men in a park in the eastern city of Lahore, in the Punjab province, may have caused a wave of country-wide disgust, but speaks volumes of how unsafe public spaces are for Pakistani women.

“If I’m not safe in my own city, I can never be safe in any corner of the world,” said the woman survivor, also a TikTokker, in an interview narrating the incident that occurred on August 14, also Pakistan’s 74th day of independence and was captured on videos that went viral soon after.

Actor Ushna Shah echoed the same sentiment on Twitter: “What else has to happen for every single person to accept the fact that women are not safe in Pakistan. Women are not safe.”

“Over the years, public spaces for women in Pakistan have been decreasing,” lamented Sheema Kermani, a renowned classical dancer, and founder of Karachi-based Tehrik-e-Niswan, a women’s rights group. She and her group have had their share of unwarranted episodes, performing in public spaces, even doing street theatre. They have had stones hurled at them or have been asked to stop their performance, in which case they pack up immediately and leave to “avoid confrontation”.

Despite more women joining the workforce and the emergence of young feminist groups that have “actually pushed for making public spaces safe for women,” Kermani observed, “the last couple of years has taken Pakistani society back many hundreds of years” where women are “hated, demeaned, exploited, abused, even raped”. She added: “It is as if their lives are of little consequence.”

And that is what the TikTokker felt when she said: “They were playing with me,” as they ripped off her clothes.

This incident comes just weeks after the beheading of a former diplomat’s daughter in the capital. Another undated video that went viral, following the TikTokker’s assault, showed a man lunging towards two women riding on the back of a rickshaw and is heard kissing one of them. Police are investigating yet another video of a woman being stripped by a group of men in a park.

Prime Minister Imran Khan does not make it easier either when he blames women for these crimes that he says are “spreading like cancer”. “Wearing very few clothes,” he said, will have an “impact on the men unless they are robots”. In 2019, the information minister quoted the Prime Minister for blaming TikTok, a social media platform, for the “growing obscenity and vulgarity in society”.

“But I was not even vulgarly dressed,” the TikTok survivor had said in her interview.

She had faced an unruly mob while covering an anti-government protest sit-in by the now ruling Pakistan Tehrik-e-Insaf (PTI), in Faisalabad, also in Punjab, in 2014, that had left her “shaken to the core” after being attacked by a volley of verbal abuse.

“They wanted to see me break down,” she said. When that did not happen, they started “throwing empty plastic water bottles and sticks at me,” she told IPS over the phone from Islamabad, the country’s capital.

Seven years later, said Memon, Pakistani women journalists remain “untrained”, “unprepared”, and “vulnerable” to a crowd that can quickly turn violent. While media outlets want to send women to these events, they seldom have a contingency escape plan to quickly evacuate them when things get rough.

In 2018, the London-based Thomson Reuters Foundation ranked Pakistan the sixth most dangerous country and fifth on non-sexual violence, including domestic abuse in the world for women.

“Unless these men are not punished, there will be no stopping them,” said Sana Mirza, Memon’s colleague, who faced a similar situation in another PTI rally in Lahore, just a few weeks after Memon, in 2014.

Unlike Memon, she broke down in front of the camera, “feeling humiliated,” she said, and the episode continued haunting her, and she refused to go out in the field for a good eight months. “I even removed myself from social media as these platforms had become too toxic, and I was unable to sleep,” she told IPS over the phone from Islamabad.

While many women, had they experienced what the TikTokker’s went through, would have kept silent, Mirza said, she saluted this woman “for her courage to lodge a complaint to the police”.

So far, over 60 men have been arrested after they were identified through the video using the national database. The police have geo-fenced 28,000 people and shortlisted 350 suspects, and the arrests continue.

But Mirza remains unconvinced the arrested men arrested will be punished. “They never are. Just look at the statistics!” she said.

According to Karachi-based War Against Rape, while sexual assault and rape cases have increased, the conviction rate is less than 3%. And this figure is about the crimes that are reported.

While the “system may not be perfect”, Amna Baig, an Islamabad-based policewoman, defending the police system by not reporting such incidents was “emboldening” perpetrators. She termed the complaint filing by the TikTok user, albeit three days late, a very “courageous” step.

In her five years of being in the force at various cities in Punjab, she said, she had come across several murders of women by their spouses. Still, neither the deceased nor any family member ever filed a complaint of domestic violence (DV) before the murder.

“You can save so many lives if you report,” she said, adding, “Just lodging a complaint can act as a deterrent because the person knows he will be held accountable”.

Interestingly, Baig feels “safer” and “empowered” in a police uniform than in plain clothes. “I think the uniform exudes both the fear factor as well as respect,” and has never been harassed while on duty.

Still, it is not too late to ensure “women’s choices, voices, and lives count” if you ask Senator Sherry Rehman.

It was time to bring to life the domestic violence bill that she had first introduced back in 2004, as a member of the national assembly, but which she continues to stumble “on the barriers of misogyny and anti-women lobbies”.

The Council of Islamic Ideology (CII) is vetting it to ensure it is in tandem with the Shariah .

“Why are only legislations related to women sent to the CII?” asked Rehman. “Like the rest, these too, can be discussed in the parliament, and their fate decided through voting just the way other bills are discussed and passed,” she added.

While she admitted no one law or series of laws would change the game, moving the law is the starting point, not the endpoint for change.

“Without baseline laws against domestic violence, for instance, such as the one in Sindh, the courts won’t have the legal scaffolding to provide the relief even if they are so inclined,” she pointed out.

Learn more about the related issues:

Bookmark or share this with others using some popular social bookmarking web sites:

Link to this page from your site/blog