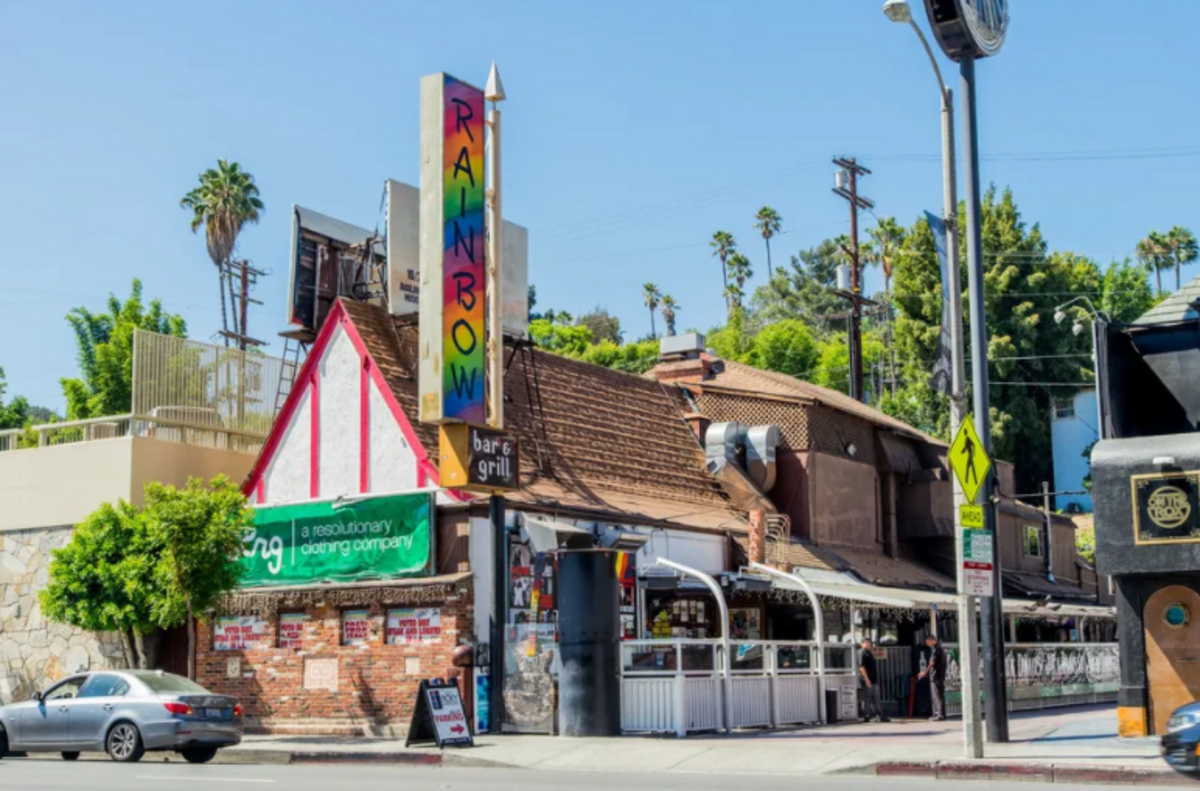 The Rainbow Bar and Grill has stood at the same spot on the Sunset Strip for so long that many WeHo residents are unaware that the location had a previous life, first as the Villa Nova in the 30s and later as the Windjammer from the 40s through the 60s. Legend has it that Joe DiMaggio proposed to Marilyn Monroe at one of the Windjammer’s tables. The location, along with the Roxy next door, was taken over by the late Mario Maglieri and his partners Elmer Valentine and Lou Adler in 1972.

The Rainbow was an instant hit with the music crowd, especially after the Roxy, formerly a strip joint called Chuck Landis’s Largo, opened next door. Those who entered the Rainbow were greeted by a dimly lit but cozy restaurant and bar on the lower floor with an always-lit fireplace and booths with tables lining the walls. The “star” table was located across from the fireplace, and famous faces could often be found seated there. Over the years, framed photos and mementos were added to the walls behind the booths.

I personally started hanging out at the ‘Bow in 1973, both at the downstairs restaurant and the sort-of private club “Over the Rainbow,” the dark, tiny room upstairs. This was the place where rock stars, actors and other industry types went to drink and mingle. The “private” part meant that not just anyone could get in but well-connected guys and foxy ladies found the doors open, making it one of the top spots for celebs and hot young ladies to hook up.

In addition to the set of stairs that led up to the club from the main floor of the restaurant, there was another going down to the parking lot that could only be accessed from inside. Customers tended to use this exit after a night of drinking and whatever else, so in between tequila, quaaludes and platform shoes, patrons went tumbling down the back stairs pretty regularly.

There were too many characters hanging around for me to remember them all but I do recall talking to the adorable singer/songwriter/actor Paul Willliams shortly before “Phantom of the Paradise” came out. He’s so short that he had to climb up on the barstools but I doubt that made him less appealing to the ladies.

One of the ladies I met was a well-known groupie called The Butter Queen, who was mentioned in the Stones’ song “Rip This Joint” and the doc “Mad Dogs and Englishmen.” I complimented the pastel streaks in her blonde hair and she told me how she did it with food coloring. I tried it and it worked just fine, washing out easily so you’re not stuck with it.

I also met Playmate of the Year/actress Victoria Vetri whose career was on a downward slide after a promising start in “Rosemary’s Baby.” Alas, things did not go well for her and she was recently paroled after nine years in prison for shooting her husband.

This was an especially cool time to patronize the ‘Bow because Glam Rock was peaking and out-of-town musicians were frequent visitors, like members of the New York Dolls, who stood out even among the usual glittery crowd. I recall David Bowie coming in with then-wife Angie during his Ziggy Stardust period, looking very dapper in a wide-shouldered suit.

Some of the VIP crowd later moved to On the Rox, the private club above the Roxy, including John Belushi. The SNL alum was a frequent visitor to the club and the restaurant when he was in town staying at the Chateau Marmont, a few blocks to the east. In fact, Belushi ate his last meal at the Rainbow.

In 2007, I interviewed the late Rainbow owner Mario Maglieri and his wife Scarlett, who told me about the last time they saw the comic alive. When Belushi, who was known to have been doing a large quantity of drugs at the time, came into the restaurant, the Maglieris were disturbed by how ill he looked and ordered a variety of dishes to tempt his appetite. The only thing that Belushi ate was a few spoonfuls of Scarlett’s homemade lentil soup. His body was found the next morning in his bungalow at the Chateau Marmont, dead from an overdose of heroin and cocaine. His autopsy showed that the only thing in Belushi’s stomach was lentil soup.

The most regular of all the Rainbow regulars was Lemmy Kilmister of the heavy-metal band Motorhead, who made the club’s bar his home away from home for two decades until his death in 2015. The next year, a statue in his honor was erected on the back patio but the place just hasn’t been the same without him. Or without original owner Mario Maglieri, who died in 2017 at the age of 93.

The Rainbow restaurant was the perfect place to enjoy a meal before a night of clubbing or a pizza afterwards. My personal favorites were the avocado seafood salad and the stuffed mushrooms. Except for the prices, the menu remains pretty much the same decades later.

After almost a half-century, there must be enough Rainbow stories to fill a very long book, but the final chapter hasn’t been written yet. Unlike most trendy clubs that fail after their original crowd moves on to a newer hot spot, the Rainbow managed to keep attracting new generations of rockers and other fanciers of a warm and welcoming place to hang out with friends.