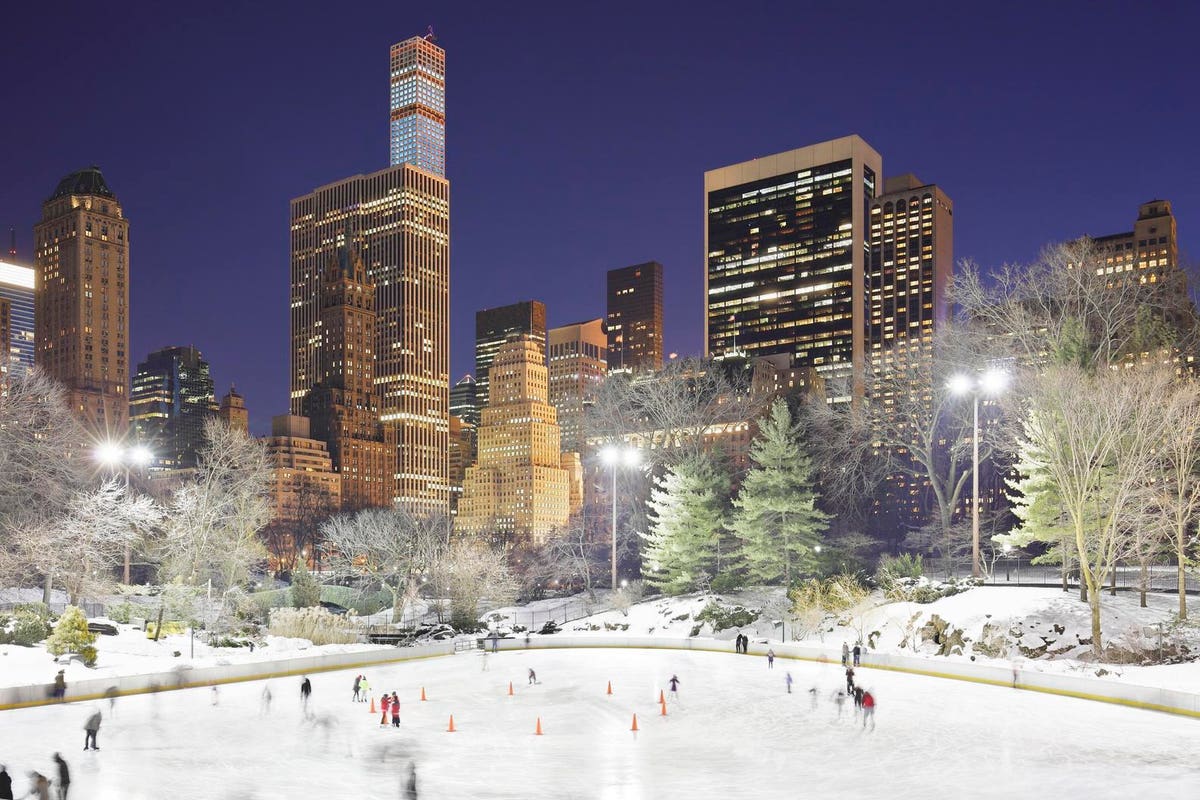 As New York residents hit the streets for Christmas shopping and visitors (including international visitors now allowed in) filter into the city to experience the holidays in this vibrant setting, new places have opened and others reopened in enhanced form. New York always puts on a good show at this time of year. Among the options including a new way to travel into town:

Wollman Rink in Central Park. The skating rink at Rockefeller Center next to the famous tree usually gets all of the attention but residents flock to this rink in the park, newly reopened and upgraded for the season and now no longer under the management of the Trump Organization. Improvements to the rink surface and maintenance are part of the upgrades as well as a digital ticketing system, new clubhouse and enhanced food offerings. Created by the well known caterers of high profile events Great Performances and Melba Wilson, owner of Harlem’s revered Melba’s Restaurant, the culinary program, now in its initial phase, is offering selections such as Hudson Valley pumpkin soup with maple roasted pumpkin seeds, bratwurst with red cabbage slaw and a Taste of Melba’s plate with jerk chicken, macaroni and cheese and collard greens. And since this is New York: a bagel with smoked salmon available on weekends.

Gold Room at Lotte New York Palace It would be hard to find a more elegant place to toast to the holidays than this gilded cocktail bar within the landmarked Villard Mansion that is part of this midtown hotel. Reopened in early November and featuring gilt ceilings dating from 1882 that reflect the opulence of the Gilded Age in the city, the bar is introducing a new cocktail menu with some offerings dedicated to major players of that era such as The Carnegie composed of Bowmore 12 Year Single Malt Islay Scotch, Luxardo Liqueur, Absinthe and Lemon Zest garnished with torched rosemary. Accompanying food items range from black truffle frites to pan seared local black sea bass with ginger citrus gremolata. And next door in the Villard Restaurant, breakfast dishes such as lemon mascarpone pancakes with dulce de leche butter and bourbon spiked maple syrup are served in a setting that wouldn’t look out of place in a European palace.

AIR at Night at SUMMIT One Vanderbilt The multi faceted glass observatory which opened in October was already dazzling visitors with its prism refractions and 360 degree high above midtown views. For the holidays, visiting hours are going to be extended starting November 24th through the end of January adding Wednesdays and late night hours to the visiting schedule. To go along with the night views, creator Kenzo Digital has devised a sound and light show that bounces an array of colors through the main space, a display of refractive orbs in the interactive room AFFINITY and another interactive room UNITY in which visitors’ portraits are joined with projected clouds.

Bar Milano at Eataly While shopping for Italian gourmet items for holiday meals (or treats for yourself), it’s a good idea to take a break and let someone else do the cooking, particularly at this just opened restaurant within Eataly’s flagship Flatiron location. The menu celebrates Milanese cuisine and apparently gets it right according to various Milanese businesspeople who stopped in to test it during the opening week. Authenticity aside, dishes such as the Milanese braised beef. pork and mortadella meatball Mondeghili, Risotto a la Milanesa (risotto with saffron and bone marrow brodo,) l’Osbus, the Milanese ossobuco, the classic Cotoletta alla Milanese prepared here with a bone in veal chop and the 40 yolk pasta Tajarin al Tartufo Bianco (white truffles) are all delicious, worth stopping in for even when not shopping.

The Jet  Introduced last week as a new way to travel between Hudson Yards in New York and Metro Center in Washington D.C., this bus redefines that method of transit for anyone seeking to visit friends or family or do business in those cities. There are just 14 leather seats with ample legroom six feet apart and 70 inch recline with foot rests giving passengers plenty of personal space. The most unique aspect of the seats, though, is the motion canceling BOSE technology that through its movement up and down, cushions against 90% of rough road/pothole jostling; you see the seats moving when you sit behind them but you don’t feel it, just a smooth ride, sitting in it. Add an attendant to serve snacks, complimentary beer, wine and espresso, an air filtration system used in ambulances and fast streaming WiFi and it’s definitely a more relaxing way to travel (starting price: $99 each way.)  Now if only there was some way to control traffic—although the projected four departures a way are scheduled at off peak times to work around it. And depending on how successful this route is, these coaches may expand to other East Coast cities.