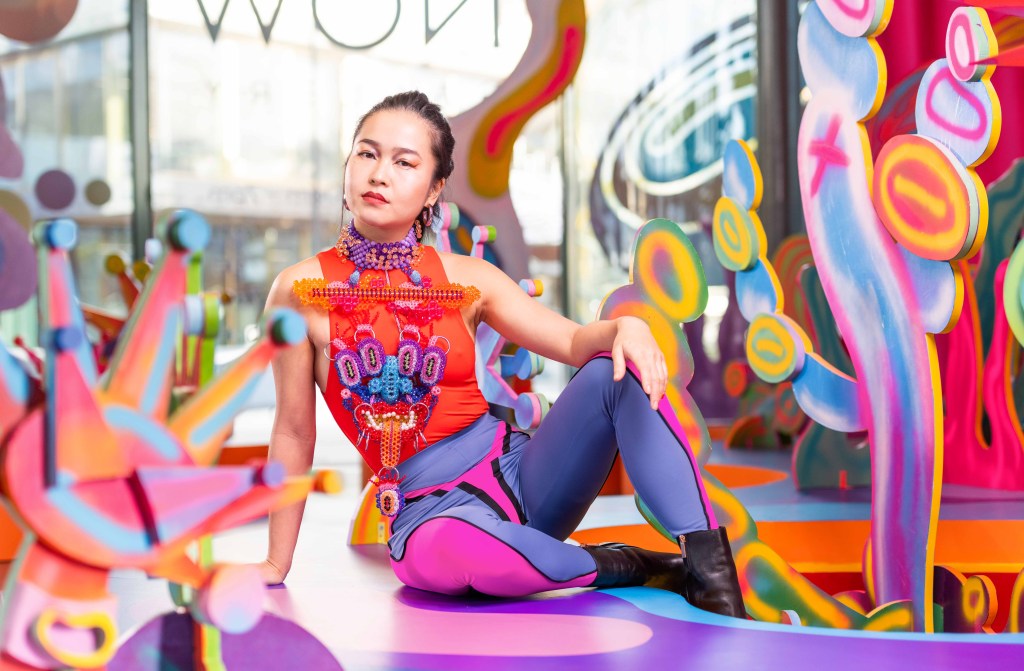 LONDON — Fashion set designer Lydia Chan is adding a bit of color and fun to East London’s urban regeneration project, Greenwich Peninsula, with her solo installation debut “Your Ship Has Landed” at the Now Gallery, which opened this Friday for the public and is running until Mar. 6, 2022.

The London-based Chinese Canadian designer transformed the curved facade of the art space into a futuristic fantasy world through an array of vivid colors, augmented reality interactive components and alien-shaped creatures.

Chan said her installation is not about grand concept, rather it is “designed to plant a seed of science fiction and fantasy in our subconscious,” and “open up conversations about reinterpreting science as fun and bring out our inner children.”

“The gallery is 1,300 square feet, which is pretty big and it’s 7 meters high. It’s humongous. The pieces that I made are also really big. The point is that this kind of plays with scale and makes you feel really small and insignificant compared to the grandeur of space in the universe and life itself. It’s that kind of scale that reminds you that whatever problems you have or whoever you are, actually you are just a tiny dot in this giant space,” she said.

Viewers are also able to experience the installation at home with virtual reality goggles. Digital artists Songyee Kim and Thibaut Evrard created the virtual experience of the installation for Chan since her project was developed during COVID-19 lockdowns.

“I started this project in March when we were still in lockdown. So I was like, ‘what if COVID-19 never ends and we never leave our house?’ So there is a part of a design where we were thinking about how people can engage with the exhibition even if we were stuck at home. So that’s kind of where the AR aspect came from,” Chan explained.

“There are two environment filters that are gallery-specific. So you can access them only at the gallery. But then there are two filters that you can access just at home. There’s one that is the face filter and the other one that’s an environment filter, and then you can project the different components inside the exhibition into your own home. So that you can be inside this sort of like alien space in your home,” she added.

Prior to launching her career in set design by working under the celebrated set designer and artist Gary Card, Chan trained as an interior designer before enrolling in fashion communication and promotion at Central Saint Martins. Her vibrant use of color as well as her maximalist and often surreal aesthetic has established her as one of the most exciting young set designers working in the fashion industry today, with clients including Vivienne Westwood, Stella McCartney and Gucci.

“I was going to be a stylist and I realized that it’s just a lot of emails and really boring. During university, we did a project on set design, and one of the projects was to research different set designers. I researched Gary and I decided that he’s my creative soulmate.…So basically for the entire time that was in London, I was involved in set design and was assisting Gary.”

“It’s been amazing because I’ve always really liked making things and making my own objects, either jewelry or clothes. Making was like a big part of who I am as a person. I think it’s like kind of my life’s calling,” Chan said.

In fact, this project with Now Gallery wouldn’t come about without Card’s involvement.

“He recommended me to the gallery, and then I was among a few other artists to pitch ideas for this exhibition, and they picked me in the end,” she added.

“I’m proud to say that Lydia is my star pupil,” Card told WWD: “She embodies my total design philosophy. Lydia was quite shy when she started to work with me, it took a while to see who she was…then we got to know each other there was so much about her that reminded me of myself when I was starting out.”

“A love for cartoon iconography, monsters, robots, with the ability to use those influences to make fantastic fashion set pieces. She has pure and boundless creative energy. One of the few assistants I’ve ever worked with that I could leave with making a project and I’d have total confidence she would nail it, and she did, every time. She could turn six cardboard boxes into something incredible,” he added.

Jemima Burrill, curator at Now Gallery Chan’s installation is “going to give us the energetic exhibition we all need.”

“For our winter months, we are going to be enticing people into a world with both her comic aesthetic and her colorful ethos.…Our objective is to have an environment where people are able to come and perform, dance, pose, whilst also absorbing Lydia’s perpetual curiosity in how the world works,” she added.