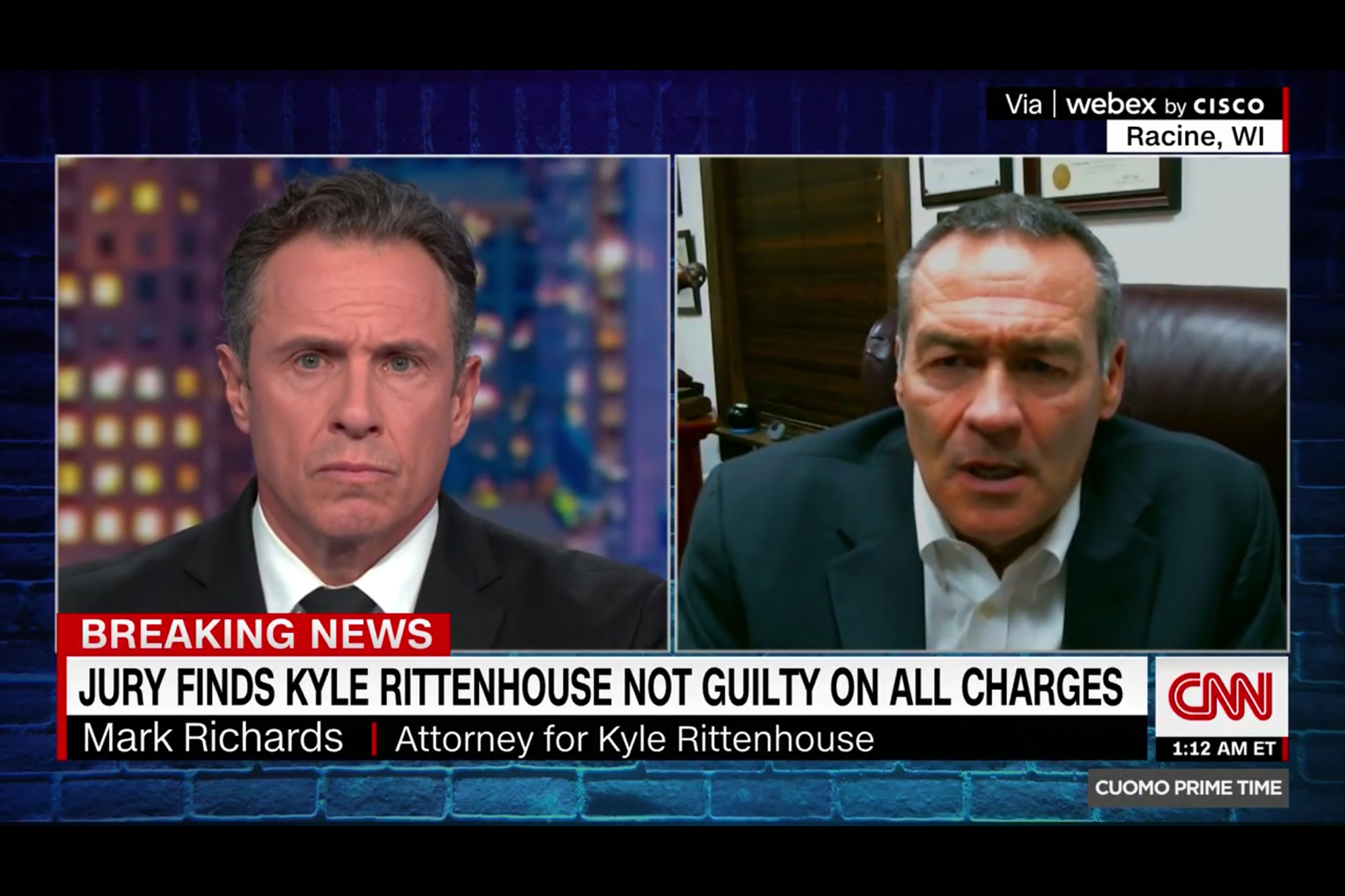 Kyle Rittenhouse’s attorney said that he booted a Tucker Carlson/Fox News video crew filming a documentary on Rittenhouse from the defense’s room “several times” during the weeks-long trial of his client, who shot three people, killing two, at a racial justice protest.

Not long after news broke that a jury acquitted Rittenhouse on Friday, we learned that Fox News host Tucker Carlson had sent a film crew to Kenosha, Wisconsin, to document the trial. A Carlson interview of Rittenhouse is scheduled to air on Fox News this Monday night, followed by a streaming documentary airing in December. The documentary, Fox breathlessly bragged in a press release, will feature “exclusive behind-the-scenes access to Rittenhouse and his defense team.”

Tucker Carlson reveals that his team was working with Rittenhouse on a “documentary” throughout the trial. pic.twitter.com/SppXou8LQn

But that “exclusive behind-the-scenes access” irritated Rittenhouse’s defense attorney Mark Richards, who told CNN’s Chris Cuomo on Friday night that he “did not approve” the film crew’s presence.

“Please don’t take this question the wrong way and let me know if you’re taking it the wrong way,” Cuomo said. “Word [is] that you guys had a film crew embedded with you from Fox News from Tucker Carlson. … I want to know why that decision was made.”

“I did not approve of that,” Richards responded. “I threw them out of the room several times. They were — and I’m not suggesting that Fox or some other network — I don’t think a film crew is appropriate for something like this.”

Richards went on to say that the film crew’s presence was approved by people who were fundraising to compensate Rittenhouse’s attorneys and experts who testified for the defense. “But the people who were raising the money to pay for the experts and to pay for the attorneys were trying to raise money. And that was part of it,” Richards said. “So, I think — I don’t want to say an evil, but a definite distraction was part of it. And I didn’t approve of it, but I’m not always the boss.”

Mark Richards, an attorney for Kyle Rittenhouse, tells CNN’s @ChrisCuomo that he “did not approve” the Fox film crew that was embedded with the defense team during the trial. https://t.co/XUR3lUOrAw pic.twitter.com/UAHtM6xXSy

Cuomo dug in, asking Richards about the people who were fundraising, which the attorney said was “crowdfunded through donations.”

“Who were the people making the calls about who got to have access to the process?” Cuomo asked.

The host next queried whether Richards was ever concerned that Rittenhouse would become a “stooge” for the far right.

“Were you worried that your client was becoming an agent of animus?” Cuomo asked. “I mean, Fox News is one thing. I used to work there. Tucker Carlson is a different animal. You know what he means in the political dialogue. Were you worried that Rittenhouse was going to become a stooge of that fringe of our political spectrum?”

Richards said that he spoke with his client about it. “I had a talk with Kyle,” the attorney said. “All I can say is what I say. And Kyle’s going to have some hard choices in his life about the direction he goes and what he stands for. Those will have to be made by Kyle eventually.”

If the Fox News interview and documentary is any suggestion, it seems like Rittenhouse may have already made his choice.