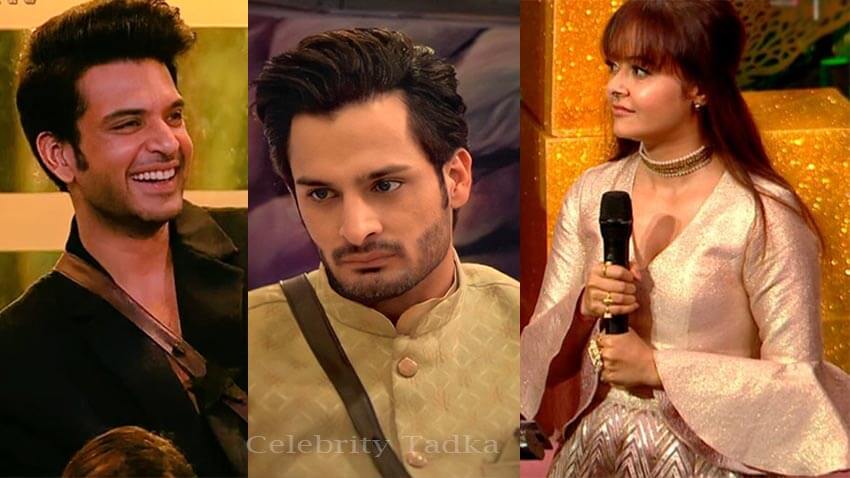 The trio interacted with host Salman Khan and guest Mahesh Manjrekar. During interaction, Devoleena’s dislike for contestant Vishal Kotian was quite evident. Salman and Mahesh noticed Devo mentioning Vishal’s name quite a few times on the stage. Noticing this, they teased her saying that she might soon fall in love with Vishal. Devoleena denies it saying that in no circumstances will she ever fall in love with Vishal.

Further, Mahesh asks her if she can fall in love with Karan Kundrra. To which, Devoleena says that Karan has already fallen in love in the house, what will now she do by falling in love with him.

Mahesh tells Devoleena that she has that thing in her that can make anyone fall in love with her, making her laugh out loud. He then added, ‘Chance hai matlab, never say never’. He then questioned if she can develop any feelings for Umar Riaz. To which, Devoleena confessed that she likes Umar, she says, “Haan mujhe pasand hai Umar waise toh. Pyaar ki baat nahi bol sakti but I like him. He is a nice boy.”

On upcoming Weekend Ka Vaar episode, the media will interact with all contestants and question them regarding their game play. Apart from this, host Salman Khan will reveal the name of top 5 contestants who’ll go ahead in the game and rest of them will exif the house.