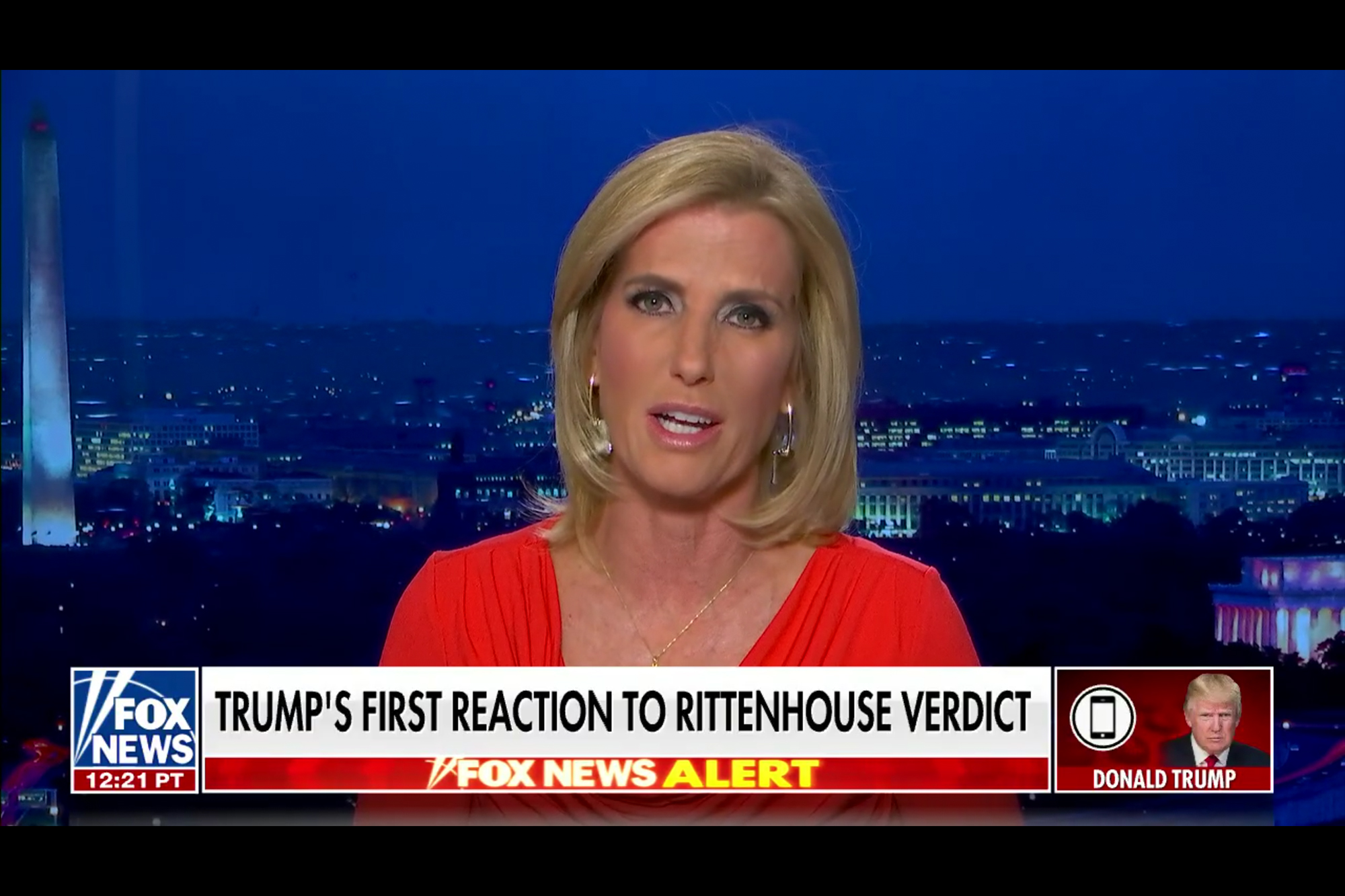 Former President Donald Trump appeared on Laura Ingraham’s Fox News show Friday night to discuss the Kyle Rittenhouse acquittal. Rittenhouse, who Trump hailed as “brave,” was tried and acquitted of homicide by an overwhelmingly white jury for shooting three people who were attending a racial justice protest, killing two and injuring the other. Trump’s interview comes days before Rittenhouse is to make his post-trial debut on the network in a Tucker Carlson interview airing Monday.

Trump praised the jury’s not guilty verdicts and said he believed that the prosecutors engaged in misconduct, somehow, by prosecuting Rittenhouse: “I think that it was a great decision. I was surprised it had to go this far. Somebody should have ended it earlier. Frankly, the case should have never been brought. It was prosecutorial misconduct, in my opinion, and is plenty of it going on in this country right now? That was disgraceful.”

Trump went on to paint Rittenhouse as a hero, calling him a “poster boy” for killing people in self-defense. “If you’re talking about innocence based on self-defense, this was the poster boy,” Trump told Ingraham. “I think he would have been dead if he had waited a quarter of a second when that gun was pointed at his head. That guy was going to pull that trigger.”

Catering to Trump’s ego, Ingraham played tape of Trump’s initial comments about the shooting and pointed out that the jury seemed to agree with the president’s assessment that Rittenhouse would have been killed if he hadn’t shot three people in Kenosha — although it’s worth noting that the two people Rittenhouse shot first did not have a firearm. After playing a tape of Trump’s comments, she asked him if he felt “vindicated.”

“Well, not vindicated, I think when you look at that tape, it was no question in my mind and that was very early on,” Trump said. “I saw it quickly on the evening news. And, you know, I was really surprised when he was prosecuted in the first place. How could you prosecute somebody? I think that the prosecutors, what they did in order to try and win instead of looking for justice, they were just looking for a win. It was probably a political case to a large extent.”

The former president also weighed in on the media’s coverage of the case, singling out two of his favorite targets, MSNBC and CNN.

Never one to leave a room without giving himself credit for something, Trump went on to say that he, personally, “saved Kenosha.”

“I help save Kenosha, as you know, I went there and I sent in a lot of people, a lot of people, because Democrats that run places don’t do too well,” Trump said. “And you had a governor that … didn’t want to call in anybody. He wanted to just let it burn. I sent in a lot of people. You know, you’re supposed to wait for the governors to call them in, but I didn’t wait. And if you look at Minneapolis, that place was burning down and we really got it stopped. I would have liked to have done it a lot earlier, but we finally we got it done. We saved it and we saved Kenosha very early.”