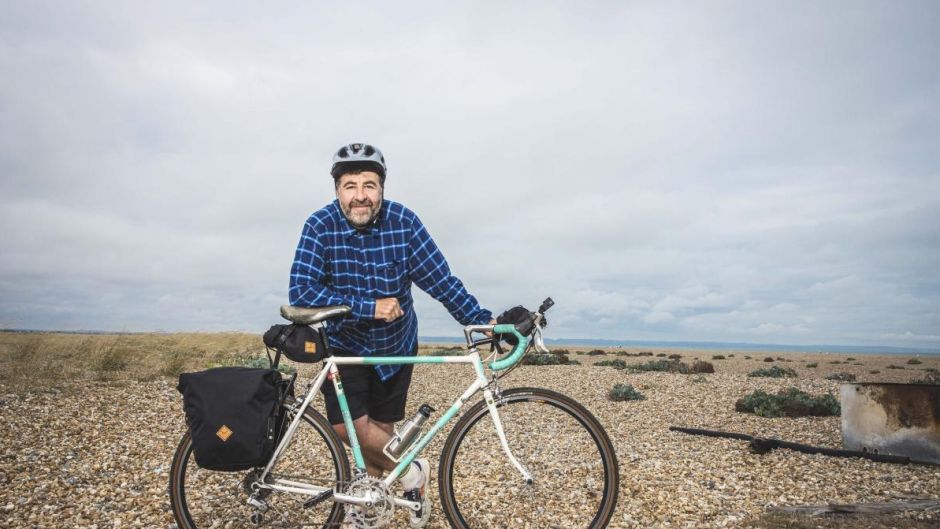 David O’Doherty has carved out a unique niche in Irish comedy as a sort of anti-Tommy Tiernan. O’Doherty is whimsical instead of shouty. And, in contrast to many other Irish comics, he doesn’t trip over himself in his rush to get to the punchline.

O’Doherty’s humour has in some ways, then, the quality of a long, chilled-out trek through the countryside. So it’s fitting his new Channel 4 show, Along for the Ride with David O’Doherty (Channel 4, Monday), should embrace just that format. Featuring the Dubliner and various celebrities taking a bike-based ramble together through scenic corners of Britain, it is essentially a more optimistic riff on the enjoyable but often bleak Mortimer and Whitehouse: Gone Fishing.

In that BBC series, Bob Mortimer and Paul Whitehouse essentially re-stage Waiting for Godot in their waders. Each week the two gnarled fishing enthusiasts cast off – and are soon contemplating life, the universe and, everything (the “everything” usually pertaining to their own mortality).

Instead of Beckett, with O’Doherty the vibe is more Flann O’Brien, with a sprinkling, in part one, of the wisdom of Boyzone. He starts his adventures by quoting “Keating” – “life is a rollercoaster, you just have to ride it”. And he is soon saddling up with his first guest, Richard Ayoade who, as Chris O’Dowd’s co-star star in the IT Crowd, will know all about pottering around with an Irish man.

“Suddenly the world stopped. I promised myself that when things came back I’d get out my bike,” says O’Doherty by way of introducing the big concept. “Do cycles I’d always wanted, to beautiful places with people I’d always wanted to go cycling with.”

They’re travelling through the green and pleasant land of Kent along the UK’s south coast. And for Irish viewers the parallel that comes to mind is perhaps not Mortimer and Whitehouse but Iarnród Enda, the RTÉ travelogue from last April in which former Taoiseach Enda Kenny got on his bike and visited the byways of Ireland.

Enda flew solo whereas O’Doherty enjoys throwing up sparks with his companion. Ayoade is droll and rather hilarious. O’Doherty’s comedy, by contrast, works through osmosis: he radiates a quirkiness that seeps into the atmosphere without you quite noticing. It’s a sort of ambient wit and, if unconventional, is nonetheless effective.

They have a few adventures along the way. A night of glamping is interrupted by a sociopathic owl. Stopping off at a bijou cafe, O’Doherty confesses his mortal terror of stewed fruits. Ayoade doesn’t have an answer for that and tucks into a giant chocolate cake.

Doherty also reveals he used to adore professional cycling until its dirty laundry was left flapping in the breeze. “It turned out every single person I ever liked was on drugs,” he says. “Steroids, human growth hormones, their own blood refrigerated from earlier in the season.”

One of the clichés around cycling is that it is a form of transport fuelled largely by sanctimony. However, angry Lycra stereotypes are kept at arm’s length throughout Along for the Ride. The episode instead confirms that a bike and miles to go before bed-time are the perfect vehicle for O’Doherty’s off-road humour and gently upbeat world view.