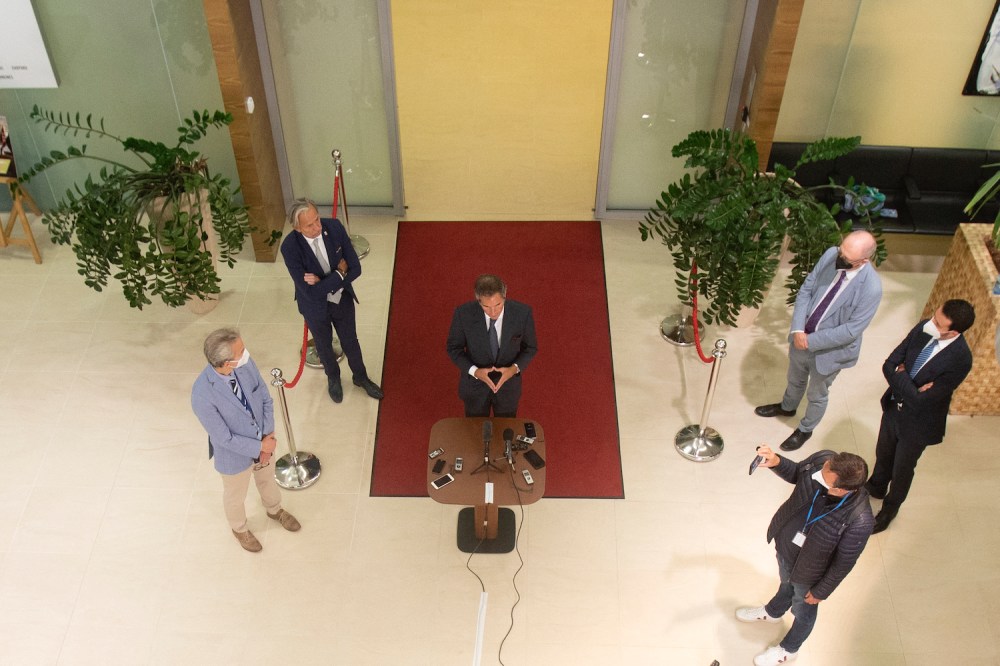 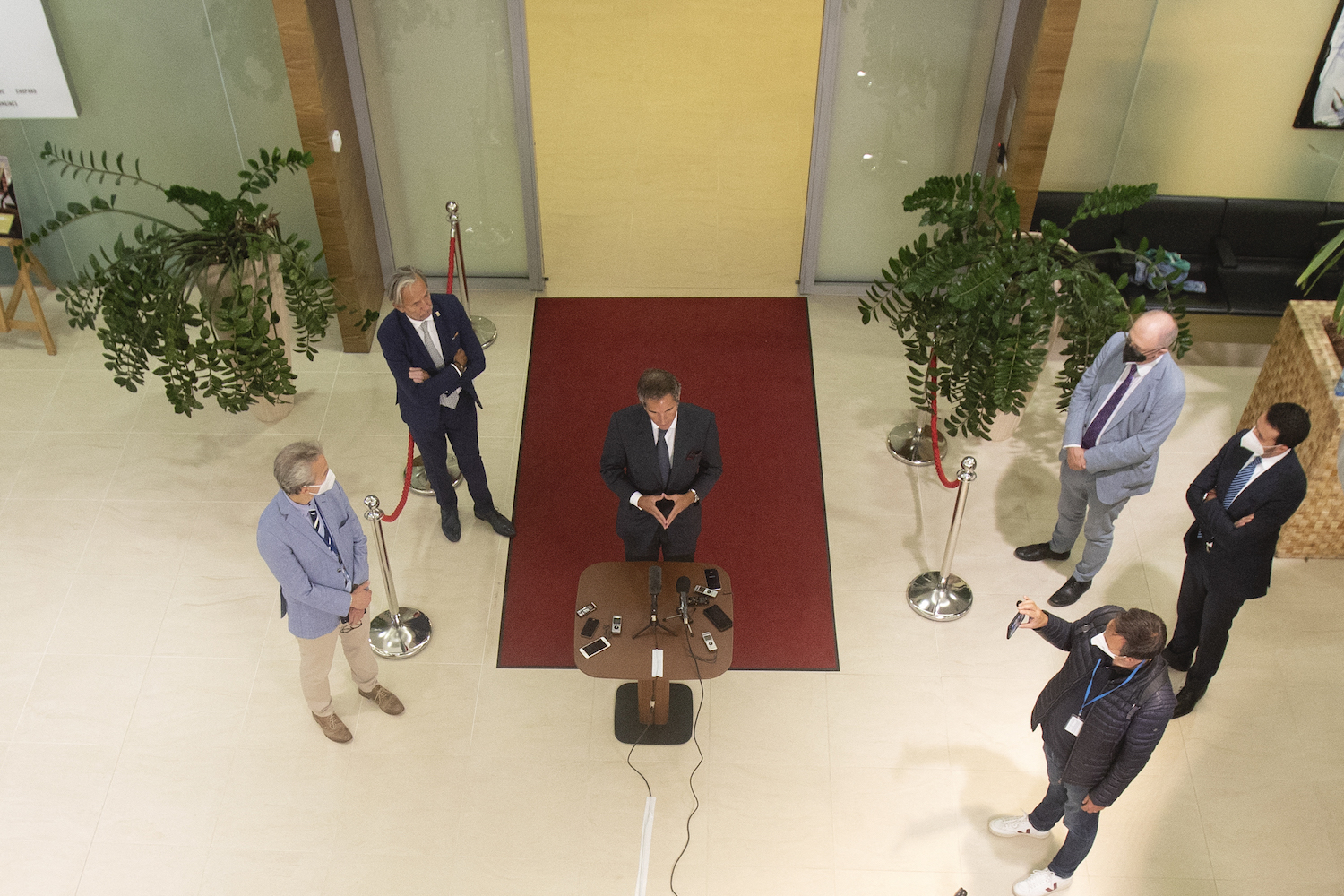 The head of the international nuclear watchdog arrives in Tehran today for talks with senior Iranian officials ahead of fresh negotiations in Vienna next Monday aimed at reviving the 2015 nuclear agreement.

Rafael Grossi, the director general of the International Atomic Energy Agency (IAEA), is pushing for answers from Iranian officials on monitoring equipment as well as other irregularities that IAEA inspectors have noted. One thing that’s already clear is Iran’s increased uranium enrichment activities, which go far beyond the 3.67 percent threshold for enrichment set by the 2015 deal.

Iran’s stockpiles of uranium enriched to the 60 percent level have increased from roughly 15 pounds over the summer to around 55 pounds today. (Nuclear weapons-grade uranium is enriched to a level of 90 percent or higher.)

As talks in Vienna resume next Monday, U.S. officials appear downbeat over the prospects of a deal coming together quickly. A New York Times report published on Sunday suggested the White House is instead exploring an interim deal meant to pause Iran’s enrichment in exchange for some sanctions relief. The compromise is in part fueled by the realization that sabotage efforts conducted by Israel in recent months have not significantly set back Iran’s nuclear program.

With a new negotiating team in place following the election of Ebrahim Raisi as president in July, a harder line is expected. Although, as Sajjad Safaei pointed out in a recent Foreign Policy piece, the confusing statements from Foreign Minister Hossein Amir-Abdollahian and chief negotiator Ali Bagheri Kani ahead of the talks suggest a consistent approach is unlikely.

There are still good reasons for Iran to return to the negotiating table, Henry Rome, a senior analyst at the Eurasia Group told Foreign Policy.

“The most important reason is they need to keep Russia and China on side here, and the Russians and Chinese want the deal back in place. They want Iran to engage,” Rome said. “I think Iran is very keen to ensure that however this shakes out, they can at least make a plausible claim that they weren’t the cause for a breakdown of the negotiations.”

As Monday approaches, Rome is still skeptical of an immediate breakthrough: “I very much doubt anything’s going to happen productively in this first round. But if there is some flexibility around the table, you could see movement quite quickly.”

“The benefit of going back to the agreement as it was, with some modifications to account for time that’s elapsed, is that basically the deal’s already written. The way I see it, there is a deal on the table. There’s stuff that needs to be fixed up, but none of it is impossible.”

Oil standoff. The United States will tap into its strategic fuel reserves in an effort to tame rising energy prices, with an official White House announcement expected today. The move is part of a joint initiative alongside China, India, Japan, and South Korea, which will also release oil reserves. The decision puts the United States on a collision course with OPEC+, which may decide against increasing production in its December meeting in a bid to maintain prices.

Keep an Eye On

Abiy on “the battlefront.” Ethiopian Prime Minister Abiy Ahmed has promised to lead federal forces “from the battlefront” beginning today in an apparent escalation of the country’s internal conflict with Tigray People’s Liberation Front (TPLF) forces. In response, a TPLF spokesman said the group would not “relent on their inexorable advance towards bringing [Abiy’s] chokehold on our people to an end.”

Brexit talks. British trade minister Anne-Marie Trevelyan ruled out a unilateral suspension of the Northern Ireland protocol “before Christmas” in an interview with the Telegraph, suggesting U.K. and EU negotiators have breathing room over the next few weeks to reach agreement on the most contentious measure in the Brexit deal. British Brexit minister David Frost had suggested last week that a new deal could be struck with EU officials before the end of the year.

Access to reliable information is vital for democratic governance, but a collection of existential threats to independent media threatens democracies worldwide. Join FP on November 30 in a discussion on securing free and independent media. Sign Up

NASA will today launch a mission to understand how best to save the world from suffering a catastrophic asteroid impact. The U.S. space agency will launch the spacecraft DART (Double Asteroid Redirection Test) with the aim of crashing it into the asteroid Dimorphos, 6.7 million miles from earth, and knocking it slightly off course.

NASA’s spacecraft is a far cry from the nuclear space weapons seen in disaster movies, but the agency hopes a nudge from its impact should be enough. “DART will only be changing the period of the orbit of Dimorphos by a tiny amount. And really that’s all that’s needed in the event that an asteroid is discovered well ahead of time,” said Kelly Fast, from NASA’s planetary defense coordination office.