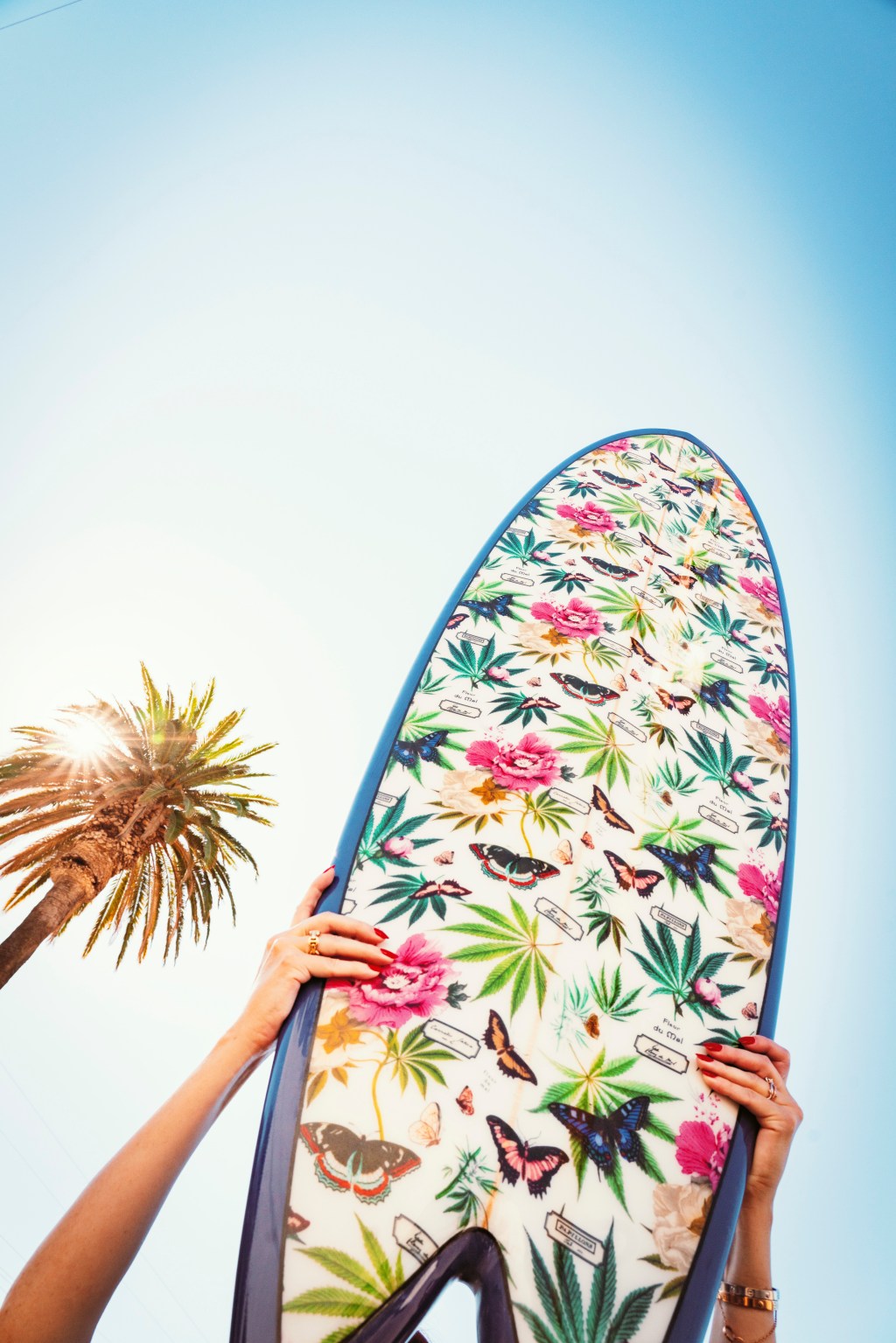 Fleur du Mal is diving into the surfboard market.

The luxury lingerie brand is launching a limited-edition line of surfboards, a collaboration with Tony Caramanico, artist, surfer and member of the East Coast Surfing Hall of Fame.

The Hawaiian-style surfboards, which come in two colors and are covered in cannabis leaves, florals and butterflies, along with the Fleur du Mal logo, also allow Jennifer Zuccarini, founder and chief executive officer of Fleur du Mal, to merge her passions for design and surfing.

“My intention with Fleur has always been to build something more than a lingerie or fashion brand,” Zuccarini told WWD. “It’s an aesthetic and I’m excited to expand into more lifestyle items. And I’m a longtime surfer who developed an appreciation for the sport over the years. I used to spend part of every summer in Montauk; it’s where I also had my very first surf lesson. And Tony is such a legend in the surf world.”

Zuccarini first met Caramanico about nine years ago in the Hamptons through her husband Edward Menicheschi, who is also a surfer. It was there that the friendship began — and the desire to one day work together creatively.

“We have been talking about creating boards together for years,” Zuccarini explained. “It was a natural fit to collaborate on the boards, but also just the beginning of so much more to come for the brand.

“I think most people will buy this as an art board; it’s the perfect holiday gift,” she added, explaining why she decided to launch the collection pre-holidays. “But you can, of course, also surf on the boards, as well.”

Fleur du Mal surfboards are $2,850 each and available at fleurdumal.com, as well as the brand’s Los Angeles and New York shops. Boards are 5 feet, 7 inches tall and 20 inches wide.

Zuccarini — who is also the cofounder of another luxury lingerie brand, Kiki de Montparnasse, which was later sold — founded Fleur du Mal online in 2012. Since then, the brand has grown to include two brick-and-mortar stores, as well as partnerships with third-party retailers, such as Revolve, Shopbop and Bloomingdale’s. Fleur du Mal now also sells ready-to-wear and swimwear, of which Zuccarini said sales are up 80 percent, year-over-year. While the designer said she has no plans to go into surfwear, there is a possibility that Fleur du Mal would create a permanent collection of surfboards.

Meanwhile, the demand for both swimwear and surfwear spiked during the pandemic, causing several brands to expand their assortments. In June, lifestyle brand LoveShackFancy expanded into surfwear after noticing a rise in the sport during lockdown. Cynthia Rowley and Roxy recently teamed up for a limited-edition ski and swimwear collaboration, just as many consumers are beginning to once again travel to warm-weather locales for the holidays.

Rowley said the demand for wetsuits was particularly evident during the pandemic, thanks to the noticeable number of celebrities spotted in the designer suits, such as Kim Kardashian West, Gigi Hadid, Gwyneth Paltrow and Julia Roberts.