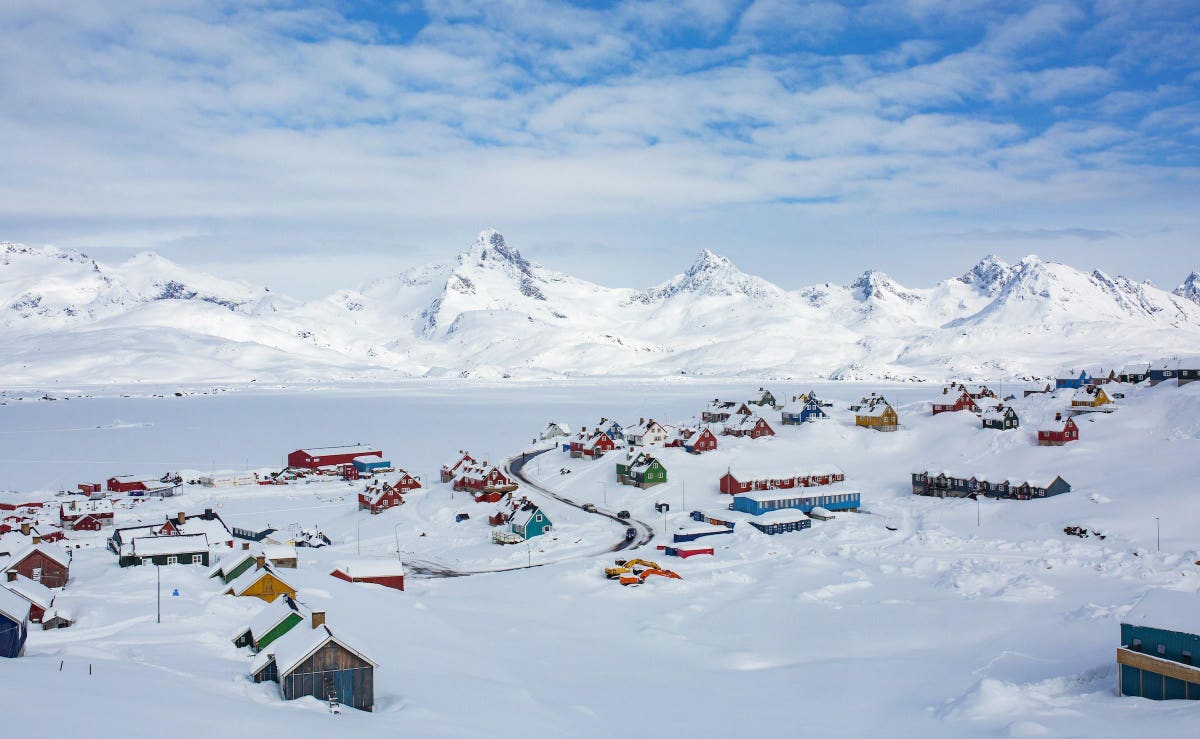 From enormous glaciers and iceberg-filled fjords to its hot springs, Greenland’s natural appeal has no limits. The island also holds important Inuit cultural history and evidence of human settlement stretching back thousands of years.

Donald Trump’s apparent interest put the island on the radar of some international tourists, yet Greenland still remains a mystery to many. To help fix that, here are seven fascinating facts about Greenland.

Greenland is a vast island. The world’s biggest non-continental island, in fact. If Greenland were a fully independent country, its area of 836,330 square miles would make it the 12th largest country by area on the planet.

Almost 80% of the land mass is covered by an ice cap and glaciers. The latest scientific research suggests the ice cap could be more than 400,000 years old.

Despite the available ice-free land being roughly the size of Sweden, Greenland’s population is just 56,000. Almost 90% of those are Inuit, whose ancestors are believed to have originated from eastern Siberia and traveled to Greenland via Canada in the 13th century.

Norsemen from Iceland settled on the southern coastline in the 10th century, but they disappeared a few centuries later. They weren’t the only ones. There is evidence of human settlement on Greenland stretching back more than 4,000 years.

All the settlements are isolated

There are no roads between any of the towns and settlements on Greenland. Air Greenland’s fleet of helicopters and Dash-8 propellor planes provide a critical transport service for locals, and useful shuttle for tourists not traveling by cruise ship.

Since the 10th century, Greenland has been economically and politically associated with Europe through various unions with Norway and Denmark. Considered Danish territory since 1814 when the Denmark-Norway union was dissolved, Greenland was fully absorbed into the Danish state in 1953, but granted home rule just 26 years later. Greenland has fully self-governed since 2009 but remains economically reliant on Denmark and continues to use the Danish krone.

However, the land of Greenland is actually part of North America. The island sits on the eastern edge of the North American tectonic plate.

The Greenlandic people have a unique culture

Despite the strong ties with Denmark, Greenland’s culture is strikingly different from Scandinavia. Most Greenlanders speak Greenlandic, Danish and English, with a traditional Inuit culture that’s infused with modern influences thanks to tourism and the internet.

This is most obviously seen in the capital city Nuuk, home to around 25% of Greenland’s population. Traditional brightly-painted wooden houses stand side-by-side with modern office buildings and a shopping mall that wouldn’t look out of place in Copenhagen.

Some aspects of the culture such as whaling and seal hunting are often frowned upon internationally, but they are customs that have been carried out for centuries.

Times are changing, though. The export of whale and seal meat is banned, while selected species including the blue whale are protected.

Greenland is already feeling the impact of climate change

The glaciers of Iceland are one of the most obvious places in the world to see the impact of climate change. “The bigger they are, the faster they melt,” was the stark verdict of a recent scientific study.

Since 2003, the vast northeast Greenland ice sheet has lost more than 10 billion tons of ice every year, according to a recent study. Were it to melt completely, scientists estimate a global sea level of rise of up to 23 feet.

Greenland’s 38-mile-long Ilulissat Icefjord is fed by the world’s fastest moving glacier and is often filled with icebergs.

The dramatic calving activity has helped scientists to better understand climate change and its impact on glaciers.

For many years the Icefjord was Greenland’s only site on the UNESCO World Heritage list, but two recent addditions have shone new light on Greenland’s environmental and cultural diversity.

Southern Greenland’s Kujataa made the list for its remarkable farming culture in both the Norse and Inuit times, while the vast Inuit hunting ground Aasivissuit-Nipisat is the largest ice-free landscape on the island.