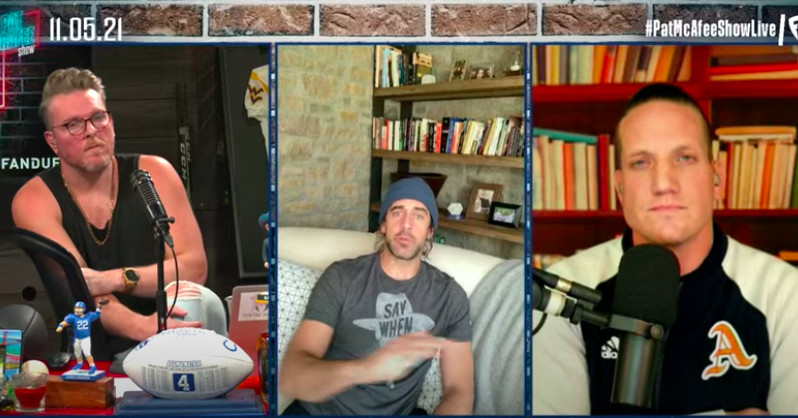 Aaron Rodgers broke his silence about hiding his vaccination status in an appearance on the Pat McAfee Show Friday. Playing every note on the dog whistle, the Packers QB went from calling the outrage against him not following Covid protocols while being unvaccinated a “witch hunt,” blaming a “woke mob,” and referencing “cancel culture.” Rodgers then rounded out the idiot buffet by saying he’s been consulting with Joe Rogan about taking the horse dewormer Ivermectin.

In a truly astonishing interview it didn’t take three minutes for Rodgers to drop this line.

“I realize I’m in the crosshairs of the woke mob right now, so before the final nail gets put in my cancel culture casket, I’d like to set the record straight on some of the blatant lies that are out there about me now.”

It’s as if Rodgers was playing Scattergories with people who believe confederate monuments should be preserved. The QB went on to say that the reason he wasn’t vaccinated was because he’s allergic to an ingredient present in both the Pfizer and Moderna vaccine.

There’s just one problem: There’s no common ingredient in every variant of the Pfizer and Moderna vaccine outside of its mRNA component. According to the CDC ingredients fact sheets of both vaccines, they contain the following:

The only common ingredient is sucrose, otherwise known as sugar — and Tromethamine, an extremely common blood thinner used in the vast majority of not just vaccines, but any kind of shots — including painkillers. In addition, there are variants of the Prizer vaccine which do not contain Tromethamine, specifically for those who do have allergies to the ingredient.

So the idea that Rodgers had no other choice except the Johnson & Johnson vaccine, as he stated, is likely another lie. Either he’s not informed on the issue, or he’s once again willingly trying to mislead people.

Rodgers justified his decision by saying “it says on the CDC’s own website that if you have an allergy to any of the ingredients you should not get the vaccine.” No, it doesn’t … not really. It says you shouldn’t get the vaccine in these cases unless you have a SERIOUS allergic reaction, or IMMEDIATE allergic reaction. In the former it’s a case of suffering from anaphylaxis, or hives, weezing or respiratory distress in the case of the latter.

In addition, if Rodgers truly was allergic, the NFL would have granted him a medical exemption — which they didn’t.

The issue is only partly that Rodgers didn’t get vaccinated, it’s that he lied or knowingly mislead — and keeps lying or knowingly misleading about it. Like a kid with their hand stuck in a cookie jar swearing it’s the cookie that bit his hand. Rodgers was reportedly “furious” word got out about his vaccination status. It’s because he wants to play both sides to preserve his brand.

Today he made it abundantly clear who he is. Rodgers left no doubt that he’s at best extremely uninformed, and part of a far larger problem.

Packers QB Aaron Rodgers: “The next great chapter of my life is being a father.” Says he was concerns that the vaccine would make him sterile were a factor in his decision.

“I’m not some sort of anti-vaxx, flat-earther.”

Saying you’re not an “anti-vaxx, flat-earther” in response to the Covid vaccine is kind of like saying you’re “immunized” when asked if you’re vaccinated. It’s a deflection, a cover, and all the Ivermectin in the world won’t stop the damage he’s done to how the world views Aaron Rodgers.

It really wouldn’t have been difficult to just say “I’m not getting vaccinated.” That could have ended all this before it began, but Aaron brought this all on himself.